Today is the day when many of my blogging friends are revealing their A to Z Challenge themes. I had a brilliant idea for a theme, based on the success of last year’s Gallus Glasgow. (Actually, what I mean is that pal Helen MacKinven had the brilliant idea for me. Check out her site if you want to see a poodle in pink shades.) People make Glasgow is the city’s current marketing slogan, and the idea was to choose some of the city’s historical figures to show how they still influence Glasgow today. The downside is that I left the research too late and had too many letters missing, so it’s going to appear as an occasional series instead. This is the first.

One way of influencing a city is to have part of it named after you – impressive! Mary Hill (1730-1809) and her husband, Robert Graham, inherited the Gairbraid Estate because Mary’s father, Hew Hill, had no male heirs. Mary and Robert ran into money troubles after speculating in coal-mining, but their big break came when parliament approved the planning of the route of the Forth & Clyde Canal in 1768, which went through the estate. They were compensated for this and once the canal was completed, around 1790, their land along the canal suddenly became much more valuable and they sold it with the condition that if a town was to develop in the area it would be named after Mary.

Maryhill became a burgh in 1856 and was incorporated into the City of Glasgow in 1891. Its Burgh Halls were built in 1878, fell into disrepair in the 1960s and were rescued and reopened in 2012. A major factor in raising money for the refurbishment was the stained glass – 20 panels featuring the small industries and factories in 1870s Maryhill. Normally, stained glass is seen in churches and palaces, so I think it was visionary for the time to create windows showing ordinary people in their ordinary working clothes going about their daily tasks.

I live very close to Maryhill, and since last autumn I’ve been volunteering as a Heritage Tour Guide at the Burgh Halls, on both the general tour and the Women of Maryhill tour which I’ve researched and developed myself. I graduated in history a very long time ago and I’m really enjoying being able to put that to use in retirement. You can see me (red stripey jumper) at the tour launch below … 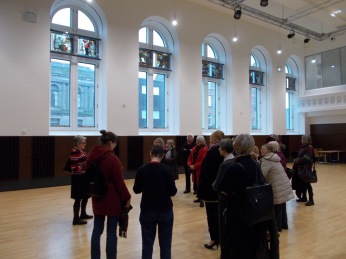 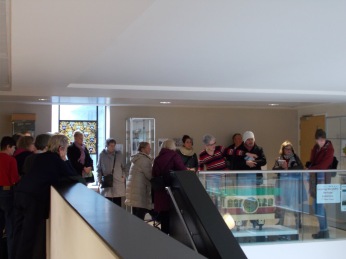 … and enjoying tea and scones with some of the participants after the most recent tour on Saturday. 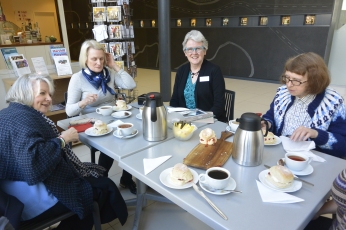 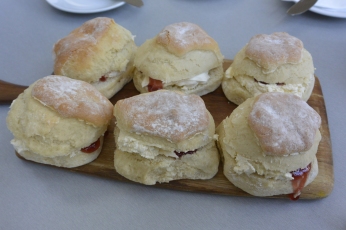 If you’re in and around Glasgow, keep an eye on the Maryhill Burgh Halls website for news of more tours and events.