Yes, we’ve been to Amsterdam again! I wrote extensively about the city after we were there in November, so when I get round to posting about this visit I’ll try to be briefer. It’s the first time we’ve been in warm sunshine and, wow, it looks good that way!

We actually had sunshine at home too – though not all the time. A visit to Inchmahome Priory at the beginning of the month was a bit grey. The priory (c. 1238) is on a small island on the Lake of Menteith, so you arrive by boat which is exciting. The island’s main claim to fame is as a haven for Mary Queen of Scots – she spent a few weeks here, aged 4, after Scotland lost a battle with the English in 1547. 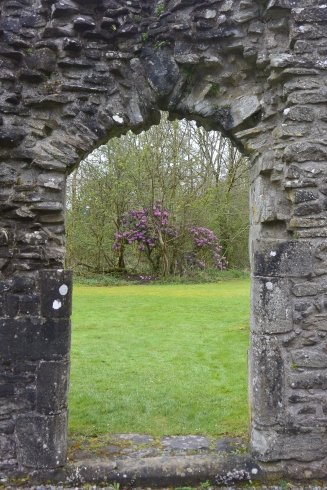 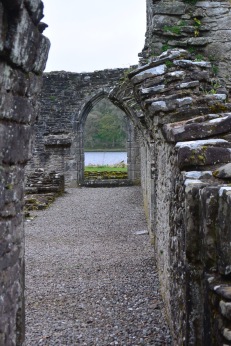 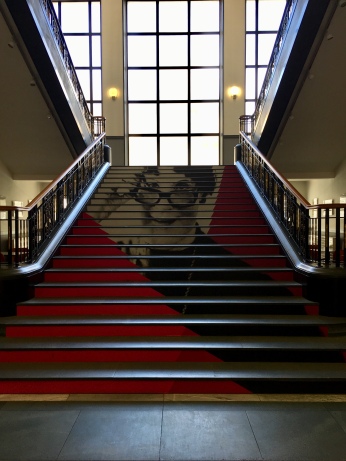 We had a sunnier day in Edinburgh. I wanted to visit the exhibition at the National Library to celebrate the centenary of Muriel Spark’s birth, and we caught it just before it closed. It was excellent. No photography was allowed inside for copyright reasons, but we took a few pictures in the entrance hall. I loved what they had done to their staircase.

We also managed to fit in two more exhibitions, and a wander through some of Edinburgh’s pretty streets.

… you’re sure of a big surprise! 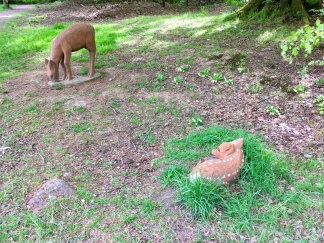 Surprise one was that I didn’t know about Cairnhill Woods, despite having lived within half an hour’s walk for thirty years, until a friend posted pictures on Facebook of his kids playing near some of the chainsaw carvings. Surprise two was that as I left the woods after my first visit, who should I run into but that same friend and his son? The carvings are the work of Iain Chalmers of Chainsaw Creations and have only been there since 2014, but even without them the woods are a lovely Sunday afternoon stroll, especially at this time of year when the bluebells and primroses are in full bloom.

On a walk through Kelvingrove Park, two of the West End’s most iconic buildings can be seen peeking at each other from opposite sides of the river (Kelvingrove Art Gallery and Museum and University of Glasgow). 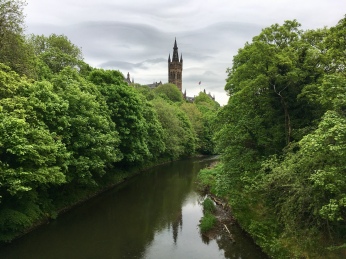 I was pleased that George Wylie’s sculpture was in a complimentary mood, and even more pleased to discover small signs of growth on the storm-damaged Suffrage Oak. It’s hard to see against surrounding trees, but some of those leaves are definitely attached to the oak. There is hope! 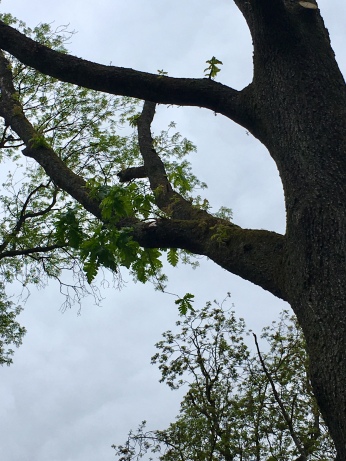 Another day, I walked in the opposite direction along the Kelvin to the Garscube Estate, formerly the site of a country mansion and now home to parts of Glasgow University including the Vet School. Coming home via the canal I felt very lucky to have these two waterways almost on my doorstep.

For the third month in a row, John has spent time in China. This time, to make the travelling even more difficult for himself, he went to a conference in California first! It was a long journey from San Francisco to Chengdu, but at least he had a day to sight-see before starting work again. On my only visit to Chengdu, many years ago, I remember visiting this museum to Du Fu (Tang dynasty poet) with its replica of the thatched cottage he built in 759.

You might remember I’ve been answering Kim’s Sunshine Blogger nomination questions two at a time each month. Questions five and six are Who inspires you? and Why do you blog? For inspiration I could give many answers, but I’m sticking with my current project, promoting Suffrage Pioneer Jessie Stephen. The more I read about this woman, the more awe-struck I am. Next month’s roundup might well have more news about her. As for why I blog – it started as a personal record for myself, but now it keeps me in touch with all you lovely people who are reading it!

On that very subject, are you an (ahem) older blogger like me? If so, perhaps you could help Rachel at Write into Life by completing her short survey on why you blog and the benefits (if any) you get from it.

Finally, my Scottish words of the month which I’ve chosen to put together because they rhyme. If I said to you “A wee girl chapped on my door and asked if she could clap the dog” you might be puzzled – not least because I don’t have a dog, but please imagine I do. Why is this child applauding it? Well, she isn’t – chap and clap are words which confused me when I arrived in Glasgow as they had extra meanings I hadn’t encountered before. To chap is to knock and to clap is to pat or stroke. So now you know! If you have a real dog, please pass on a few imaginary claps from me.

So those were some of my happiest moments in May – how was your month?