I last wrote about our Hebridean Hop at the beginning of November – how time flies! We had just arrived in Barra, our last port of call on the trip. Now the story continues …

Our first morning dawned very dreich – not the weather for getting the boat out to the castle as planned – so we visited Dualchas, the small heritage centre, instead. (No photography allowed.) Its main collection heavily features the history of the herring industry: more interesting than it sounds, particularly the story of the herring girls who followed the fish down the coast to Great Yarmouth as long ago as the 1880s. (There’s an interesting post about them on F Yeah History.) The special exhibition when we were there was on Father John MacMillan (1880-1951), another of the inspirational island priests we kept coming across on our travels. A few days later, we went searching for his grave: apparently 1200 people attended his funeral.

It wasn’t quite lunchtime, but we needed somewhere to go to plan our next move so headed for Macroon’s Café in the Post Office. Both parts of the business are run by an enterprising Yorkshire couple who relocated to Barra after redundancy simply because they liked Whisky Galore – Macroon is the name of the postmaster in the film. The scones, as you can see above, are awesome. 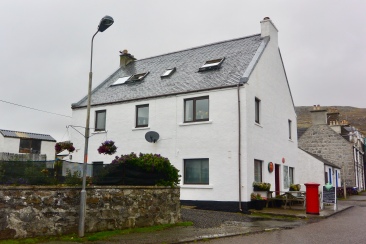 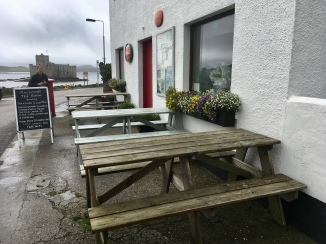 Our decision was to drive to Vatersay, a neighbouring island attached to Barra by a causeway, to take a walk there. After parking the car, we headed for Tràigh Siar (West Beach) passing the memorial to the Annie Jane on the way. 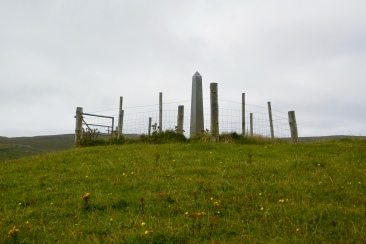 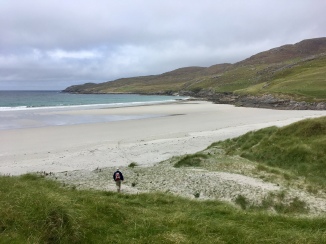 The Annie Jane ran aground here in 1853. With at least 450 emigrants bound for Canada (it’s impossible to say exactly how many because children’s names were not recorded), the ship hit rocks in a storm and broke into three parts. Only about 100 people survived, and the dead were buried in two mass graves in the dunes.

At the end of the beach, we turned uphill to the summit of Dun Vatersay. This was very wet and boggy, and the locals watched us struggling with some interest! From the top we could see both Tràigh Siar and Bàgh Bhatarsaigh (Vatersay bay) as well as Vatersay village. 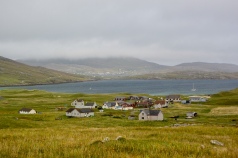 We continued the boggy struggle, passing a standing stone (though some think it might be just an old gatepost) on our way to Bàgh a Deas (South Bay) which we shared with more locals. 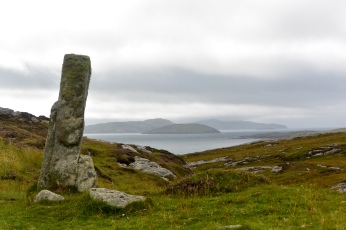 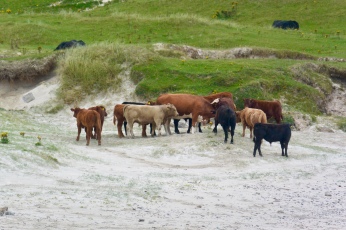 The next point of interest was the ruined village of Eorisdale built by the Vatersay Raiders. At the beginning of the 20th century the island, which her tenants farmed as a single holding, was owned by Lady Gordon Cathcart. Pressure on land throughout the Western Isles led ten men to raid Vatersay, build huts and plant potatoes without permission. In 1908, some were imprisoned for refusing to leave, but the case caused an outcry across Scotland, and in 1909 the Government responded more positively by buying the island and dividing it up into 58 crofts. The village was built at this time and was inhabited as recently as the 1970s. 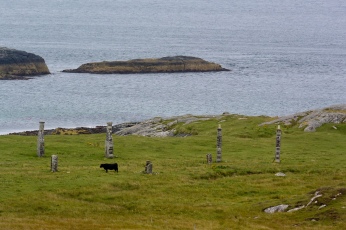 Finally, after more boggy walking, we descended to Vatersay Bay. We’d been here before! The first photograph below shows me with our friends John and Pat in 1993. I remember then there were lots of abandoned cars in the dunes. We didn’t spot any this time, but they are probably still buried there – the next photograph of the fence at the top of the dunes on the way back to the car shows how quickly the sand can shift. 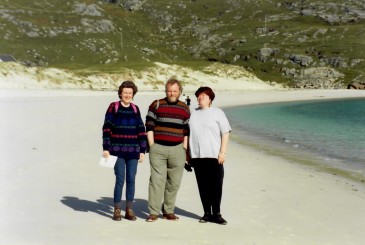 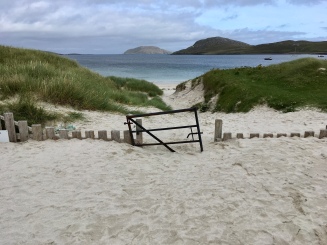 On the way back we stopped a couple of times – at the unusual war memorial and at a viewpoint over Castlebay. 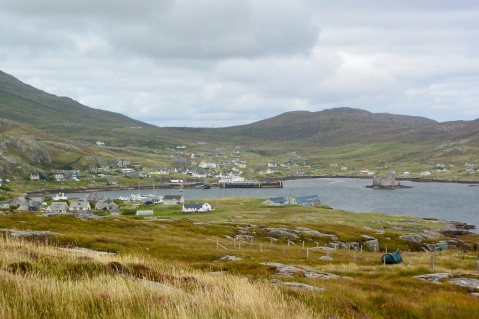 Maybe we’d get out to the castle tomorrow?