Our plan was to leave Dundee after breakfast on Monday morning and stop at Bannockburn on the way home. We’d parked the car on Friday afternoon and, although we’d walked past it several times on our way in and out of the hotel, we hadn’t paid it close attention since. We were dismayed to discover that one of the front tyres was completely flat. John pumped it up, but we didn’t want to drive home without getting it checked out, so I Googled the nearest branch of Kwik Fit which turned out to be just beyond the University of Dundee’s campus.

The place was busy so we were sent off for a coffee until the mechanic could look at the car. Bad news came back: there was a small bolt embedded in the tyre which would therefore need to be replaced. A big marquee had been erected in part of the hotel car park for all their Christmas functions, so presumably we had driven over a discarded bolt when we arrived. The result was that we had an unscheduled hour for a final walk in Dundee. And what a lot of interesting history and culture we found!

First we passed this pretty little park, Seabraes, with a mini bandstand and three strange critters climbing a stone pillar. I had no idea what they were till I looked them up at home – they represent the video game Lemmings which was produced in a nearby studio in 1991 and was apparently a runaway hit. The bronze version was created by local artist Alyson Conway in 2013.

I visited Dundee with some friends one day last summer to walk part of the Women’s History Trail, and we came across a few of the plaques again. Miss Mary Ann Baxter (1801-1884) used her wealth to support missionary work abroad and good works in Dundee. At the age of 80 she founded University College, now the University of Dundee, to promote the education of both sexes. Frances (Fanny) Wright (1795-1852) was well ahead of her time. Daughter of an ardent republican,  she went to the USA where she became famous as a writer and lecturer. Controversially, she scorned religion and campaigned for women’s rights, free love and the emancipation of slaves.

Mary Lily Walker (1863-1913) was born in the house below and was one of the first female entrants to University College. As a young woman she became conscious of the appalling living conditions of the poor and went on to transform Dundee with baby clinics, health visitors, school dinners, children’s convalescent holidays and more. 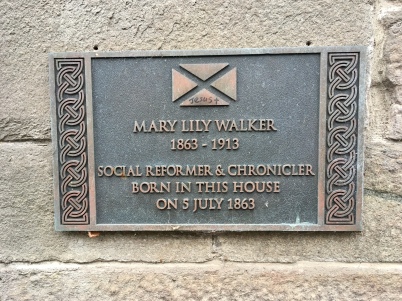 Something I didn’t know about was the Tree of Liberty. After the French Revolution, civil unrest spread across Scotland, often symbolised by the planting of a Tree of Liberty. The original Dundee tree was planted in 1792 but was chopped down in 1930 as part of a road-widening scheme. The current Tree of Liberty resides in a rather sad-looking corner of the university. The plaque beside it relates to the original tree and dates from 1912. 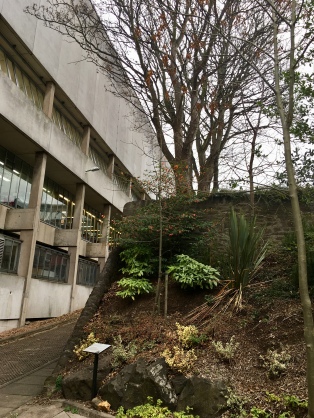 Finally, on the way to collect the car, I admired the extremely distressed looking George Orwell pub with its pseudo-Penguin Books signage. 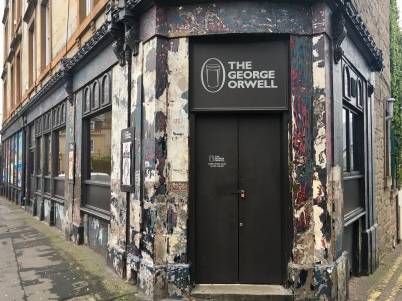 So – back on the road! And back to our original plan of visiting Bannockburn, site of a famous battle in 1314 when King of Scots Robert the Bruce was victorious against the army of King Edward II of England. It’s years, maybe decades, since I’ve been there, certainly long before the current visitor centre was built. Sadly, this proved to be our second set back of the day.

First stop was what the website described as the ‘award winning’ café. We were latish for lunch because of the holdup with the car, but it was still only 1.30pm. Nevertheless, it was quicker to list what was left on the menu (not much) than what was not available, but we managed to find something to eat. I won’t be giving it any awards though.

Next stop the Visitor Experience. I have checked the website again before writing this and it is now made quite clear several times that entry is by pre-booked time-slots. The day we visited it merely stated ‘During our busy holiday periods, entry is by pre-booked time slots’ – I know that’s an exact quote because John put it in his (rather scathing) Trip Advisor review. We didn’t think a cold Monday in mid-November was a busy holiday period, so were dismayed to find we’d have over an hour to wait. We passed, and went to look at the outdoor site.

This has an impressive bronze statue of Robert the Bruce on horseback, and a rather less inspiring concrete rotunda. Both of these date from the 1960s and both have been restored relatively recently. They would be much more interesting if there were more information boards to tell you about the battle and how it related to the landscape in front of you. Still, we enjoyed a quick, cold walk round before heading for the car and then home for a warm-up. 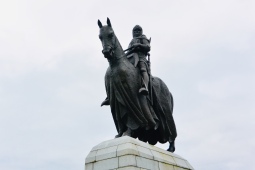 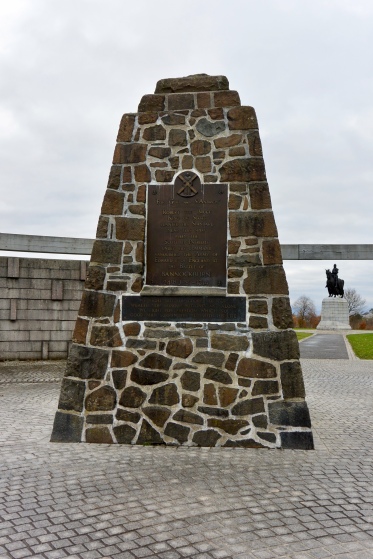 Our Bannockburn experience was decidedly underwhelming, although I give the visitor centre one star for updating their website to make it much clearer what to expect. Perhaps they read John’s review – and several other similar ones. I’m glad we didn’t make it the main focus of our day: the unplanned walk in Dundee was much more interesting, so the flat tyre did us a favour, albeit an expensive one. Overall, Dundee was a great place for a long weekend and not somewhere I would have thought about a few years ago. I’m so glad we went.

72 thoughts on “Dundee: the road home”