We gallivanted off on two trips in May. We had a glorious week on the Hebridean island of Islay with lots of walking and whisky tasting (there are nine distilleries at the last count). We also spent a long weekend with friends in the beautiful Northumberland countryside near Allendale.

More on those two trips will follow in due course, which means this will be quite a short gallivanting post because we didn’t do much else to write about. We went to the annual Orchid Fair in the Botanic Gardens, though it seemed to me much smaller than normal and didn’t detain us long.

John bought a new car! I find the unveiling thing hilarious, I didn’t get that last year when I bought my humble little Clio. As you can see, he’s very pleased with it – even if its first outing was wet.

Forgive the terrible image below (scanned from an actual newspaper cutting, I couldn’t find it in The Herald‘s digital copy). Strictly speaking, this belongs to April when the event happened, but the photograph wasn’t published till May so here it is. I attended the Women of Scotland Lunch with my friends Sheana and Ann – they are the women with whom I’ve been promoting suffragette Jessie Stephen, Sheana being Jessie’s great-niece. I’m not sure I count as a prominent woman, as the cutting describes us – Sheana invited me, so I went! It was very enjoyable and raised a large amount of money for Mental Health Foundation Scotland.

Speaking of Jessie, I loved cataloguing this new book at Glasgow Women’s Library. Where are the women? by Sara Sheridan is a guide to an imagined Scotland where women are commemorated as prominently as men. Jessie’s in there! 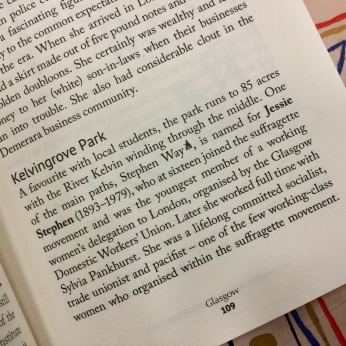 Finally, many of my Scottish words of late have referred to Brexit and the political difficulties it has created. How about fankle for another one? It’s a muddle or tangle, and can also be used as a verb. It seems appropriate to me – but who’s going to unfankle it all? I wish I knew!

Happy June to you all.