Our last day! We chose two shortish walks with lunch in Port Ellen in between. The first started at Kilnaughton Bay, just outside Port Ellen.  At the east end of the bay we explored this old building which looks like a ruined chapel but is actually the remains of a bathing hut where the ladies of Cairnmore House would once have changed. Underneath the sand, you can still see the tiled floor

From here, we crossed the bay and picked our way across rocks and walkways to the lighthouse at Carraig Fhada with its twin white towers. 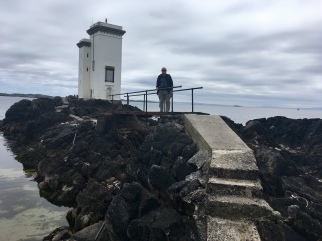 The lighthouse was commissioned in 1832 by Walter Frederick Campbell as a memorial to his wife, Ellinor, and was taken over by the Northern Lighthouse Board in 1924. 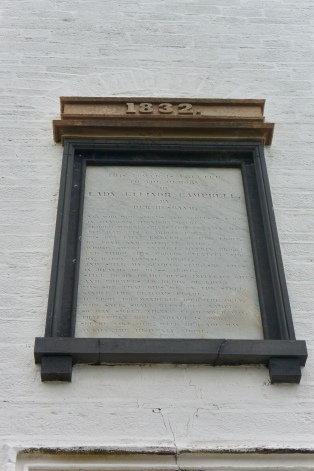 Backtracking from the lighthouse, we took the path marked Singing Sands from which we had good views back over the bay. We’d been watching the cruise ship, Ocean Atlantic of Albatros Expeditions, and I looked it up later. It was on an 8 day voyage from Dublin to Aberdeen via Orkney and Shetland. Next departure is May 21st, 2020, should you be interested. I can’t see any prices – you have to request a quote: I suspect it might be well beyond what I would like to pay!

To the Singing Sands

The Singing Sands were a bit of a disappointment. The beach, Traigh Bhan, was certainly beautiful, but we couldn’t make the sands sing however we trod on them, although we’d had success before on Ardnamurchan. (The “singing” is supposed to come from the sound the sand makes as you walk through it, and depends on the size of the grains). 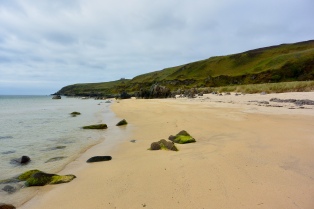 From Traigh Bhan, we climbed the grassy hill behind it, with more views back over Kilnaughton Bay until we came to a series of three cemeteries. The oldest one was by far the most interesting – Kilnaughton Old Churchyard in which you can still see the ruins of the old chapel, including a slab with a carved knight clutching his sword. 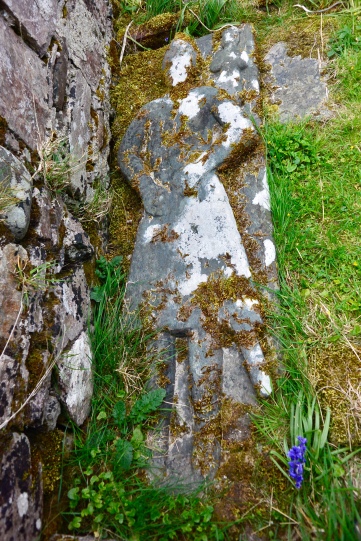 As usual, I have far too many pictures of old gravestones. I think I just liked the angel and urn on the left below. The image next to it is one of those tragic tales which always give me pause. You have to really zoom to read it, so I’ll summarise. The stone was erected by Betsy Ferguson in memory of her husband, Donald Whyte, and their sons. Donald, 53, and son Daniel, 17, were drowned at Port Ellen lighthouse on 1st January 1916. Presumably they were working as the keepers. Two other sons were killed in action, Dugald (21) in December 1915 and Walter (20) in August 1916 – they are interred in Belgium and France respectively. So in less than a year, Betsy lost her husband and three sons. Another son, John, died in infancy and the longest surviving son, Robert, died in 1933 aged 28. Betsy herself died in 1935, aged 68, and the final name on the stone is her daughter, Jessie, who survived till 1950 when she was 52. How many tragedies can one family bear?

I was also looking for Sinclairs because of my Great-Grandfather, John Joss Sinclair, who came from Islay. There were quite a lot! The stones below interested me the most because, although for a family of Campbells, one of the wives listed was Christina Sinclair, and the name was passed down to (possibly) a grandchild. It’s a family name with John Joss Sinclair’s descendants too – my grandmother and mother were both given the name Christina and my middle name is Christine. Could this Christina (born c. 1832) be a relative, possibly an aunt, of John Joss who was born in 1866? Maybe someday I’ll put the work in to find out – at the moment I’m happy speculating!

After exploring the cemeteries, we drove into Port Ellen for lunch, then continued along the south coast, past all the distilleries, to Kildalton. Here, there is another ruined church containing several carved medieval grave slabs. 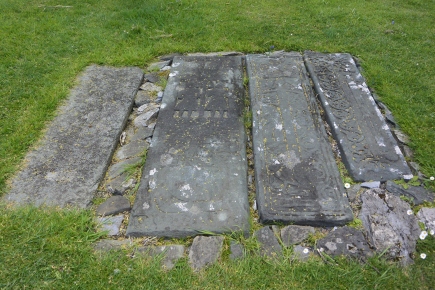 However, the most notable thing about Kildalton is the High Cross in the churchyard, one of the finest early Christian crosses in Scotland, dating from the second half of the 8th century. The cross stands 2.65 metres in height, with arms 1.32 metres across. The biblical carvings, although somewhat weathered, can still be identified and include David fighting a lion, the Virgin and Child, Abraham about to sacrifice Isaac, and Cain murdering Abel. 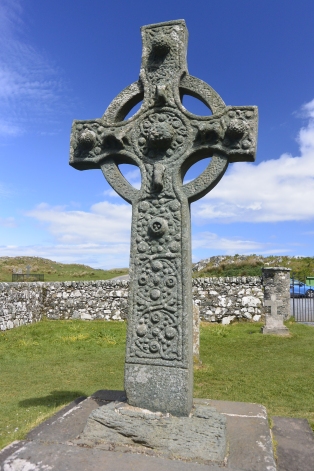 As we left, we dropped some money in the collection box by the gate, and were amused both by the fact that most people seemed to leave their offerings exposed at the foot of the cross, and by the warning notice on the gate. 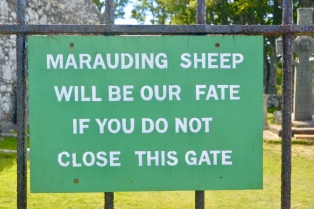 Outside the churchyard is another cross, this one medieval. The other picture below is John at Kildalton on our previous visit in 1989. I think I must be taking the photograph from the base of this cross. In 2019 there was another, more modern feature, by the track visible behind John, but I’ll leave that excitement till the end … 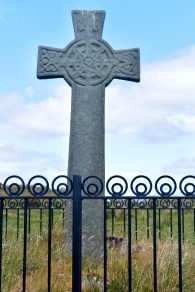 From here, we walked down a lovely woodland path to the small jetty at Port Mor. It was a lovely spot to sit and relax for a while – but not too long! We knew what treats awaited us …

Back at Kildalton, we made a beeline for Cake @ The Cross, delicious home-baking on an honesty box system. We had a cup of tea (£1 each) and a cake (£2 each) totalling £6. Now, we’d already emptied all our change into the collecting box at the church and the honesty box didn’t run to £4 change for our tenner. What to do? I bet you can guess the solution. Yes! Another two slices of cake brought the total neatly to £10 and we enjoyed them after our dinner that night.

The next morning, we packed up and drove to Port Askaig for the ferry. It was raining – hard – and we felt sorry for the people disembarking. We’d had a wonderful week and, apart from a few blips, had been so lucky with the weather. We’d love to go back to Islay, but our sadness at leaving was tempered by the though that in another 7 weeks (mid-July) we’d be off again, this time up the west coast of mainland Scotland. Coming soon – probably.