This is a short circular walk (7km) from Duns, the historic county town of Berwickshire. We had a quick look round the marketplace before we set off and found the Mercat Cross, a statue to Wojtek the Soldier Bear, and a nicely preserved ghost sign. Wojtek’s statue was gifted to the town by the people of Zagan in Poland in 2016. The Syrian brown bear was adopted by the Polish Army in 1942 in Iran. During the battle of Monte Cassino in 1944 he helped carry shells to the guns, as shown here, then at the end of WW2 he stayed with the Polish Army at Winfield in Berwickshire. Wojtek moved to Edinburgh Zoo in 1947, where he died in 1963. 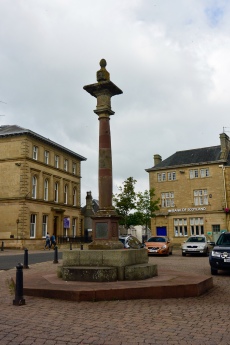 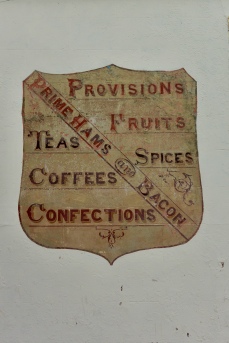 From the centre of Duns, we made our way to the archway at the entrance to the grounds of Duns Castle.

Just inside, a woodland path led up to the 218m summit of Duns Law. As we climbed, we could see the castle gateway below us with the Cheviot Hills behind it.

On the hill’s flat summit is a Covenanters’ Stone, which marks the spot where General Alexander Leslie raised the Covenanters’ standard in 1639 in defiance of King Charles I’s imposition of Episcopalianism on his Scottish subjects.

We descended part-way, then struck off across the flank of the hill where we passed a stone on the site of the old town of Dunse (sic), destroyed in the border raids of 1588. We could also see the castle peeking through the trees below us. 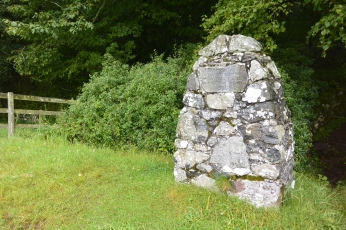 We tried to make our way down to the grounds of the castle, which we did with some difficulty. We formed the impression that not many people did this walk – the path was very overgrown and we felt we were hacking our way through at times. Once we got down, the walk through the castle’s woods was very muddy and not especially picturesque. However, we saw some lovely swans and the Neo-Gothic castle itself definitely was picturesque.

From the castle, we headed down the drive and through a different archway to the road, from which it was a short walk back to our car in the marketplace. 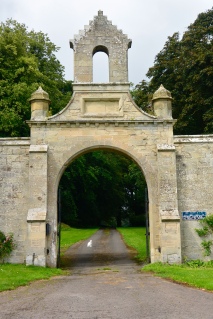