On our way home from our short break in Blairgowrie we stopped in the small Perthshire village of Dunning. We’d visited before to see the 9th century Dupplin Cross which honours Constantine, King of the Picts. It’s housed inside St Serf’s Church, which is dedicated to a 6th-century Pictish bishop also known as Servanus. Legend has it that he used his pastoral staff to slay a dragon in Dunning – aye, right! Because of Covid restrictions the church wasn’t open, but we knew that – it wasn’t what I wanted to see.

About a mile outside Dunning is this memorial, inscribed “Maggie Wall burnt here as a witch 1657”.

So who was Maggie Wall? She is said to be the last witch executed in Scotland, but this is a mysterious story. There is no official record of a Maggie Wall burned at the stake as a witch, and historically the last witch burned to death in Scotland was Janet Horne in Dornoch in 1727. Research has uncovered no confirmation that Maggie Wall ever existed –  although six alleged witches were executed near Dunning in 1663, Maggie  wasn’t one of them.  Nor does anyone know for sure who built the memorial, or who regularly maintains the lettering.  Some people think it’s a hoax, but many people are drawn to visit the memorial and leave small tributes such as painted stones or even a golf ball. I left a small, gold-coloured mirror from my handbag.

I’ve wanted to visit this site for years, ever since I first became a Glasgow Women’s Library tour guide. Maggie features in our East End Walk when we stop outside a pub on the Gallowgate, the Saracen Head, known locally as the Sarry Heid. The original Saracen Head was built in 1755 on land that used to be the kirkyard and burial grounds of Little St Mungo Church. It was a fashionable hotel, in which William and Dorothy Wordsworth stayed in 1803, but as the city moved west its reputation and standards declined. It was later converted to shops and dwellings then demolished in 1904, but the name survived.

The current pub has been here for over 100 years, but what does it have to do with Maggie? The Saracen Head claims to be Glasgow’s first (and possibly only?) pub-museum and one of the advertised exhibits is Maggie’s skull. (I have not been inside to verify this).

How did the skull of a woman who cannot be proved to have existed end up here? The cynical might say it could have been uncovered when the original building was demolished in 1904 – after all it was built on the site of an old burial ground and human remains have been uncovered there. But why Maggie Wall? Maybe this mythical figure represents all women who were executed as witches? It certainly makes a good story.

Back to Dunning before I finish – for a small village it has a lot of history with 108 listed buildings. It was the site of both an Iron Age fort and a Roman camp with the name probably deriving from the Gaelic Dùnainn meaning little fort.  For centuries it lay on the main route between Stirling and Perth, but in the nineteenth century it was bypassed by the railway and in the twentieth by road, the busy A9, so now it is a quiet little place. Here are a few things which caught our eye.

A tree was planted to commemorate the burning of Dunning during the 1715 Jacobite Rebellion. The original tree blew down in 1936 and was replaced in 1937 “the year of the coronation of Their Majesties King George VI & Queen Elizabeth”.

The fountain at the centre of the village dates from 1874 and was gifted by Alexander Martin, a former Dunning resident, who made his fortune in New Brunswick as a confectioner. 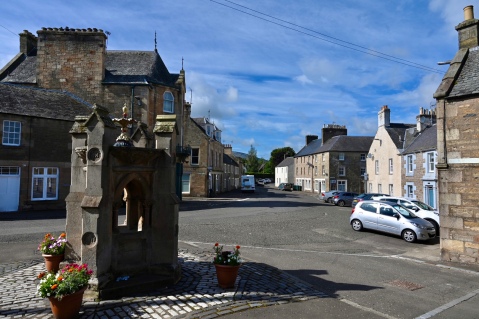 Rollo Park was presented to the parish of Dunning in 1946 by John 12th Lord Rollo of Duncrub “to commemorate over 550 years of friendship between the families of Dunning and the family of Duncrub.” I’m not sure what the figure above the inscription is – could it be St Serf’s dragon? Whatever it is, it holds a large R for Rollo. Behind it you can glimpse a mural for Dunning’s 500th anniversary in 2011. 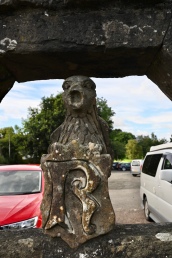 Finally, a few random shots of this pretty village. I was impressed with the modern extension to the old school building which is a lot more interesting than the boxy structures we get in Glasgow. 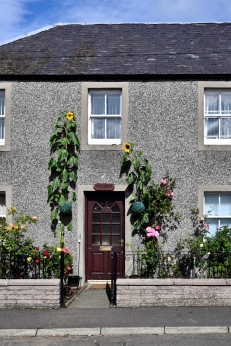 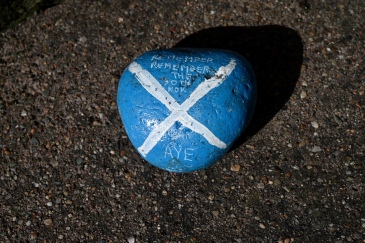 We enjoyed our short visit to a village of dragons and witches – not many places can claim both!