We’ve had some lovely, bright weekends in September which have been great for getting out and about. The walk to the Auld Wives’ Lifts on Craigmaddie Muir was one we’d wanted to do for a while – the Lifts being the rocks you can see middle right in the image above, with the Campsie fells and the prominent knob of Dumgoyne visible in the background.

The Lifts consist of three extremely large pieces of grey sandstone, one propped on top of the other two with a space between them. Couples who were considering marriage used to try to squeeze through the gap in an anticlockwise direction; if they weren’t successful, the marriage was doomed! The stones might be connected with worship of some sort and have been a place of pilgrimage for centuries. 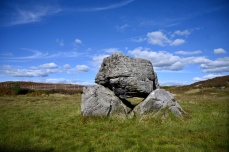 Legend has it that three witches from Baldernock, Strathblane and Campsie carried the stones to prove their strength. They are covered in Victorian graffiti as well as about eight carved heads or faces, which look ancient but seem not to have been noticed, or at least written about, until the 1970s.

The walk itself was not particularly pleasant, being over muddy, rutted fields and boggy ground, but the views, one way back towards Glasgow and the other to the Campsies and Ben Lomond, were beautiful. 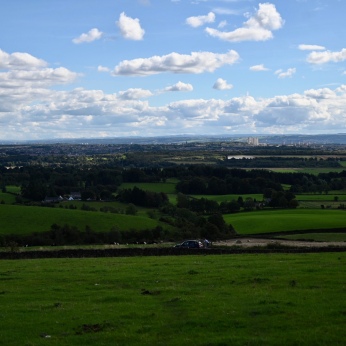 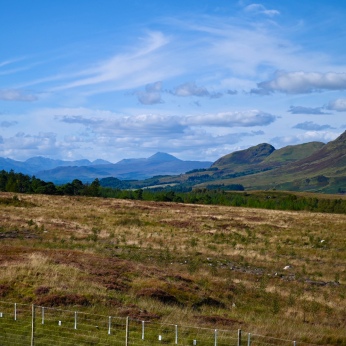 View of Campsies and Ben Lomond

A walk above the Ayrshire coastal town of Largs to Greeto Bridge also afforded good views and a welcome glimpse of the sea. The islands of Great Cumbrae and Arran can be seen beyond the town. 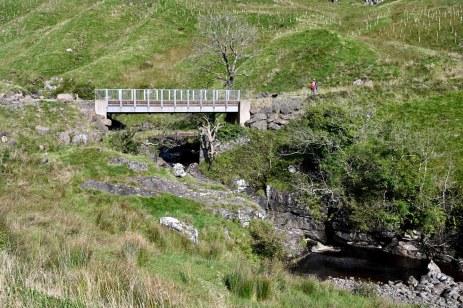 View to Cumbrae and Arran

Milngavie, just north of Glasgow, is the start of the West Highland Way. We used the beginning of the trail to branch off onto a couple of other walks. 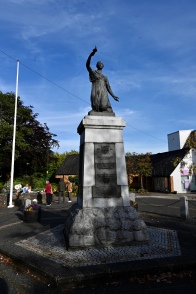 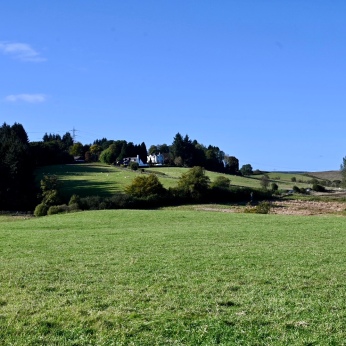 We came across several more sets of Scholars Rocks by Rachel Mimiec, previously encountered elsewhere in East Dunbartonshire in July, and parts of a new (to us) artwork, Home by Alex Allan, naming women workers in industries previously located in Milngavie. 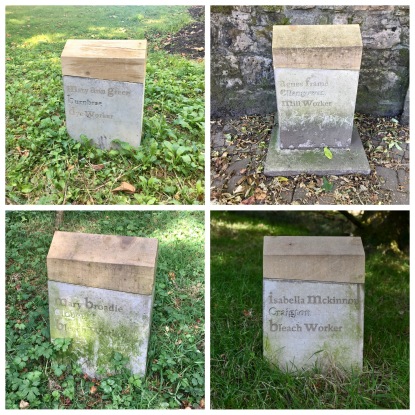 And we skirted the edge of Mugdock and Craigmaddie Reservoirs. It’s a long time since we’ve walked all the way round these two – maybe next month!

September has also been a month for women’s history. Students returned to university and the usual Fresher’s Fairs were all conducted online. As part of this, Glasgow Women’s Library was invited to set out its wares in a programme for Subcity Radio and I did a slot on a couple of the women from our heritage tours. If you wish, you can listen here – I am on second, just after the two minute mark, and I speak for about six minutes.

I have also done another of my Twitter Walks, this time on the East End, which you can follow below.

Hi, I'm @AnabelMarsh, one of GWL's Women's History tour guides. We can't take you on any walks at the moment, so I've created a virtual East End tour for you. This is a circular walk which we usually start at Glasgow Cross, but today I’m starting at the library. Why? 1/25 pic.twitter.com/Sat3rQe2TD

While taking the photographs for the above walk we spotted a new mural in process on Abercromby Street. The third photograph shows the completed mural a few days later. 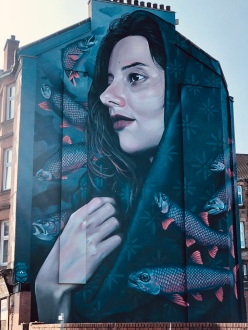 St Thenue (also known as St Enoch) is pictured wearing a shawl featuring 29 motifs in honour of the victims of the 1889 Templeton’s carpet factory disaster when 29 women were killed by a collapsing wall. Legend has it that Thenue’s father, a pagan king, ordered her to be hurled from a hill in East Lothian when she became pregnant out of wedlock. When she miraculously survived she was put into a small boat and cast adrift in the Firth of Forth to perish. She was guided to shore by a shoal of fish and given shelter at the community of St Serf in Culross where she gave birth to her son, St Mungo, the Patron Saint of Glasgow.

Another new mural this month is on the side wall of Embargo, a pub on Byres Road in the West End, and portrays Scottish music stars Annie Lennox, Calvin Harris, Emili Sandé and Lewis Capaldi. The mural is the work of local artist Rogue-One and is intended, according to the bar’s manager, as “a visual celebration of Scottish musical talent during a difficult time for the creative and hospitality industries alike.”

Finally, we encountered the highland cattle of Dawsholm Park again this month, so here are two of the most photogenic especially for Jessica! 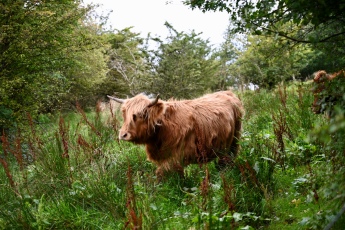 So that’s it for September and what turns out to be my 700th post.  Restrictions are closing in again, but let’s not focus on the bad stuff. Wishing you all a happy October.

Leave a Reply to Anabel @ The Glasgow Gallivanter Cancel reply