In August, John and I had a day out to Kilmacolm, a village in Renfrewshire not far from Glasgow, to photograph some sites of family history. When we visited Islay last year, I wrote about my great-grandfather, John Joss Sinclair, who was born there in 1866. (See Islay: call to place). At 16 he moved to the mainland, becoming a noted ploughman and marrying a farmer’s daughter.

She was Janet Carson, of The Green Farm in Kilmacolm, who was born in 1864. She had two brothers, Tom and Bob, and at least three sisters, Susan, Bella and Maggie. The latter emigrated to Philadelphia and married Sam Bell. The pictures below show, on the left, Janet’s parents, my great-great-grandparents, with Jenny, one of the Bell children, and on the right, John and Janet with their first two children, John (born 1886) and Margaret (Meg). By 1901 another six daughters had been added to the family, so Janet’s life must have been a hard slog. 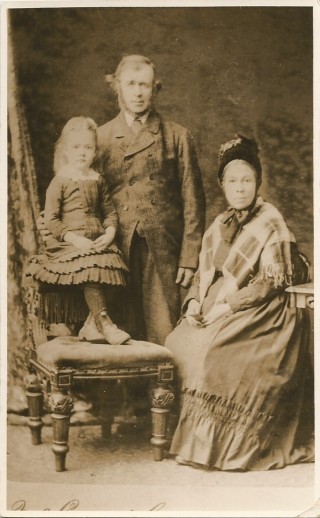 The Carsons and Jenny Bell

John and Janet Sinclair with their first two children, John and Meg
In his fifties, John gave up farm work and he and Janet, along with their three youngest daughters, moved into the Bridgend Toll House, which came with his new job as road foreman. The older children had married and moved out of the family home. Young John married Mary and had several children. Below left is Meg, with her husband Donald McPhail, around 1910. On the right, is the McClure family, Catherine (Kate), Stewart and Janet (Nettie or Netta) pictured around the end of the First World War. Netta settled in London and I think I met her only once, but I have clear memories of her much younger sister Isabella (Isa) who remained in the West of Scotland.

Kate, Stewart and Nettie McClure c1918
Three of the children emigrated, Meg and Donald McPhail sailing for Australia in 1924 – the photograph below, recently found by my aunt, shows them in later life. Two sisters went to Canada with their husbands – Isabella (Belle) and Tom Gibson, and Janet (Jen) and Bob Andrew. Both couples obtained sections of land in Saskatchewan, built houses there, and farmed successfully. Only Jen came back to visit – that’s her holding me as a baby (1957) with my grandmother looking on.

Me with Granny and Auntie Jen
My grandmother was Christina (Teenie, later Chris), the oldest of the three girls who moved to the Toll with their parents. Eventually, they all married: Chris to Percy Stroud in 1925, Mary to Tom Stevenson in 1927, and Annabella (Annie) to Bob Maskell in 1931. In the wedding photos below, I’m fairly sure that Mary (centre) is wearing the same dress as my grandmother on the left. 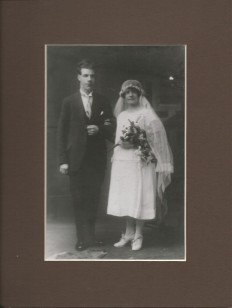 Bob and Annie Maskell 1931
Mum, also Christina, was born in 1926 and is shown here as a baby and toddler, “Wee Chrissie”, with her grandparents. For reference, Janet must be about the same age as I am now. How times have changed!

Mum and her Granny

Mum and her Grandaddy
The Toll figures largely in Mum’s many happy memories of her childhood, surrounded by loving grandparents, aunts, uncles, and cousins. In the gallery below Mum is carried by her dad in two of the photos, and is also the small girl in a wash tub.

Janet with Chris, Mary and Annie 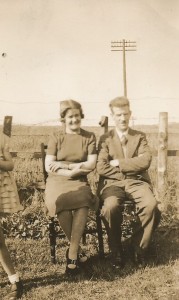 Percy and Chris with Wee Chrissie

Scotch washing
Bridgend Toll House, shown in the gallery below in an old postcard, is long gone. The site is about a mile from the village, opposite the War Memorial from which you can see two houses which were built in its place.

Bridgend, Kilmacolm
Mum herself grew up in the centre of the village in a house called Low Shells, also long gone, but the empty space where it stood still retains the name. The picture of Mum sitting on one of the benches is from a previous visit in 2016.

Low Shells 2016
At Kilmacolm Cross, the Cross Café and Parish Church sit opposite each other. Compare to the two old postcards underneath – completely recognisable, though no cows in the middle of the road these days. 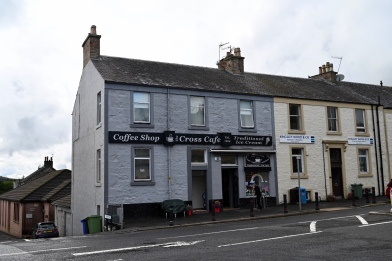 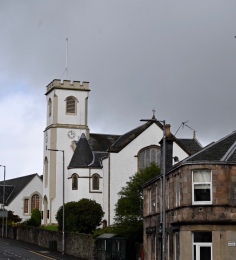 Kilmacolm Cross
The café has been run by several generations of Pignatellis, currently sisters Alda and Johanna, whom Mum has known since they were born. Because she was not with us on this latest trip, they sent her a box of Cross Café sweeties which we were happy to deliver! 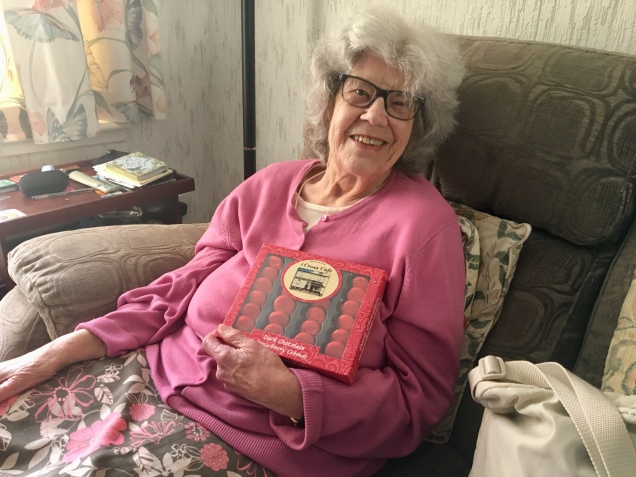 On the other side of Kilmacolm from the War Memorial is the cemetery where we paid a visit to my great-grandparents’ grave.

Sinclair grave
As well as being the last resting place of John and Janet Sinclair, the cemetery is notable for having one of the few headstones designed by Charles Rennie Mackintosh. Art Nouveau and unmistakably Mackintosh in style, it dates from 1898 and commemorates James Reid, who was a Telegraphic Superintendent of the Glasgow and South West Railway, and his wife Margaret. They were the parents-in-law of William Davidson, who was Mackintosh’s client at the house Windyhill, also in Kilmacolm. 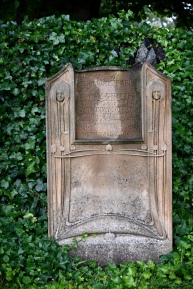 Reid headstone by CR Mackintosh
We ended our day with a walk at Glen Moss Wildlife Reserve before returning home with a slightly closer acquaintance with some of my family history. 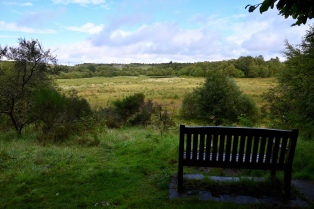 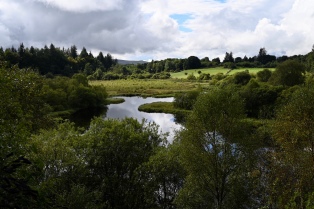 75 thoughts on “Kilmacolm: a family history”