The first weekend in March was beautiful, so we took ourselves down the coast to Fairlie. In the morning, we walked above the village, climbing alongside the Fairlie Burn which has several small waterfalls, and past Fairlie Castle, currently unrecognisable under scaffolding. The views across to Arran were lovely. When we reached the road again we met Pegasus the winged horse – no idea what he’s doing there! 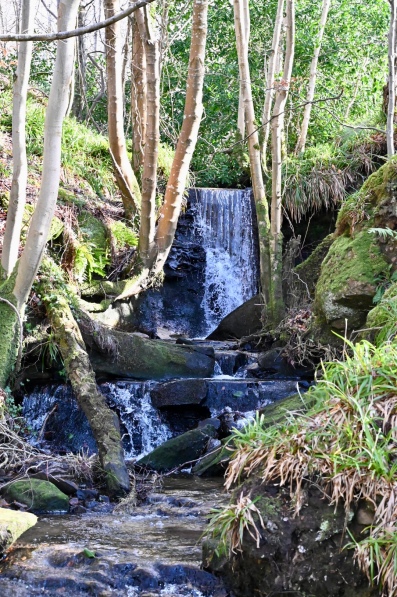 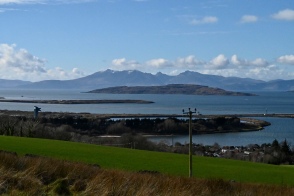 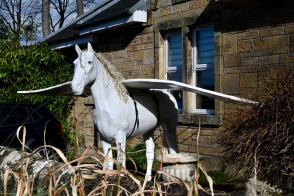 We had a break for lunch in the excellent Village Inn. The plaque on its wall, and the nearby monument, commemorate Fife Yachtbuilders which was run by three generations of William Fifes in Fairlie from 1803-1939.

After lunch, we walked along the coast. It was gorgeous! The weathered plaque and its modern counterpart both quote Psalm 89 VIX: Even in the raging of the sea thy mighty power doth reign. Billows sent mountains high by thee are stilled by thee again. Altogether, a great day out. 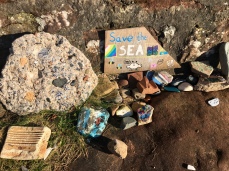 We managed to visit several exhibitions! First, Kelvingrove for an excellent photography exhibition – Coming into view: Eric Watt’s photographs of Glasgow. Watt (1934-2005) was a keen amateur photographer and member of Queen’s Park Camera Club. I bought the book. Of course I did – as you can see, I definitely need one more book about Glasgow. It’s interesting to see how much has changed, and what has stayed the same. For example, the book’s cover shows Stair Street in Maryhill which we often climb, though the housing at the top has changed.

For any Glasgow readers who might be interested, the exhibition is on until 4th March 2023 so there are plenty of opportunities to view it.

We also visited the Riverside Museum because it has opened a new room dedicated to old Glasgow record shops. The scooter on display in the “shop” window, a Lambretta LD Mk II (1956), is on loan from Alex Kapranos, lead singer of the very famous band Franz Ferdinand. I like the story behind how he acquired it when part of lesser known bands.

When the Blisters were signed, I blew the advance on a guitar, record player and the scooter. We became the Karelia, recorded an album, and sold about 12 CDs. We were dropped. Lungleg’s Todd Parmenter bought the scooter off me [so] I could pay my rent. Later, Todd was in a similar position, and I bought it back.

I also liked the collage of gig tickets, because we recognised one that we attended: Bob Dylan in February 1991. £15 for Bob Dylan – bargain! Mind you, I’m not sure I’d bother paying even that now, because the last time we saw him he played with his back to the audience most of the night and didn’t interact at all. 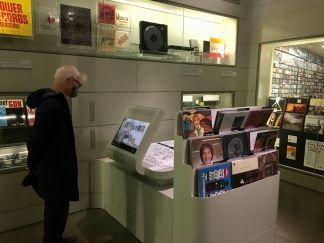 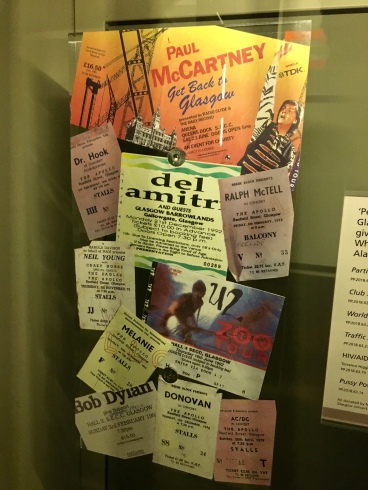 While at the Riverside, we nipped on to the Tall Ship Glenlee, which is berthed immediately behind it and reflects nicely in its windows. 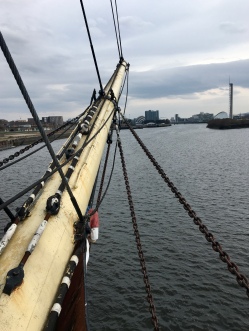 I had forgotten the story, posted in the deckhouse, of Fred Noonan who sailed in this ship for eight months in 1913 and later accompanied Amelia Earheart on her fatal round the world flight attempt in 1937. 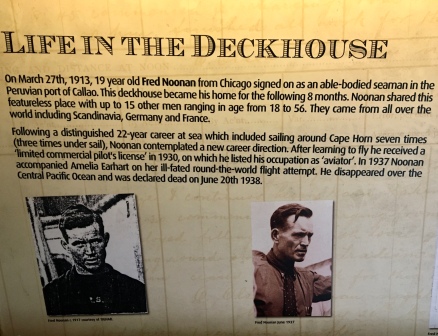 The Captain’s quarters, complete with en suite facilities, were a contrast to the deckhouse. They looked rather comfortable! 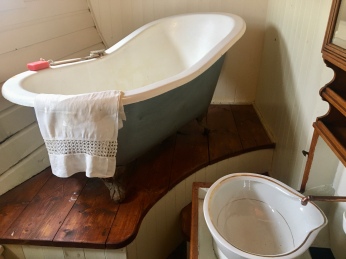 We’ve visited the ship and the Riverside many times, but it’s good that there is always something new to notice. And, especially for Becky, look where this Lipton’s tea van is from! 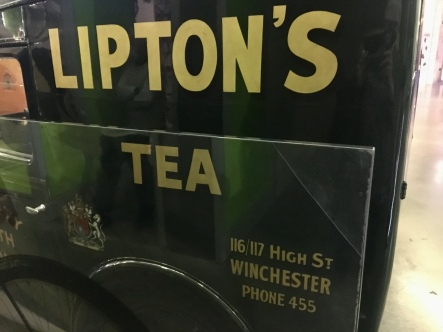 Our gallivanting has taken us well out of Glasgow. We made the trip to Edinburgh twice, first to meet a friend for lunch. While waiting for him we went into the Portrait Gallery, again somewhere we’ve been many times but which always has something new to look at. This time I admired recent portraits of two of my favourite musicians, classical violinist Nicola Benedetti, painted by Calum Stevenson in 2021, and singer-songwriter Horse McDonald, painted by Roxana Halls in 2019. We have tickets to see Horse in June, very exciting. 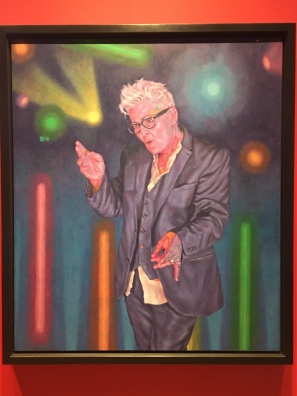 Our second visit to Edinburgh was for Van Gogh Alive, a “multi-sensory event” which we found entertaining and moving. Fortunately, I ignored the snobby review I read beforehand about this being “Van Gogh for the TikTok generation” and paid more attention to Carol of The Eternal Traveller who visited the event in Brisbane last year. She has a lot more photos than I do, particularly of the main room where the images are projected all around you, so it’s worth following the link. Of course, Mr Snooty Reviewer, looking at the actual paintings would be better, but outside Amsterdam where could you see so many? There’s more than one way to enjoy art! Also, it’s suitable for all ages: I was surprised at the number of babies and toddlers there and expected a certain amount of restlessness, but they all seemed fascinated by the colours and movement. Future artists in the making?

As well as the paintings there was music, plus screens of text telling Vincent’s life story and giving you some of his own words. My particular favourite quote: I feel that there is nothing more artistic than to love people.

The exhibition is on until July 17th.

Speaking of love, it was our wedding anniversary this month. Last year was our Ruby Wedding (40th), but because everywhere was closed we couldn’t go anywhere. This year, we made up for that by going to Glencoe – and what a weekend of beautiful weather we had! How’s this for a view to get up to in the morning?

There will definitely be more to follow on this (eventually).

March was Women’s History Month. I’m not always organised enough to do it, but this year I managed a women’s history tweet every day. Even though women, as 50% of the population, make up only around 0.5% of recorded history, it wasn’t difficult – and I managed to keep them all Scottish and mainly Glaswegian. We are there if you look for us! (Clicking on the tweet will show the whole thread).

It’s #WomensHistoryMonth! I aim to post a woman a day, starting with my absolute favourite, Jessie Stephen. She was a Suffragette, Labour and TU activist who grew up in Maryhill. https://t.co/24bnJIwgMU

I have some women’s history walks and talks lined up for next month – I’m very rusty after the last two years so need some practice.

To finish, here are a few odds and ends from the month. The Lancaster Crescent Teddy featured a few times in my posts during lockdown when he always had a message for passers-by. It seems many of those responded by sending him cards! The stained glass windows are from Gilmorehill, a former church which is now part of the University of Glasgow. The face has recently appeared at Ha’penny Bridge on the Kelvin Walkway. The ruined church is St Simon’s in Partick, the Polish Church, which appeared in my gallivanting post after it had a fire last July. It’s fence is festooned with Save St Patrick’s ribbons, but I fear it looks beyond redemption now, unfortunately. On a happier note, we also did some socialising, including coffee and cake in the garden of friends, and yes, we did have two slices each, what of it? 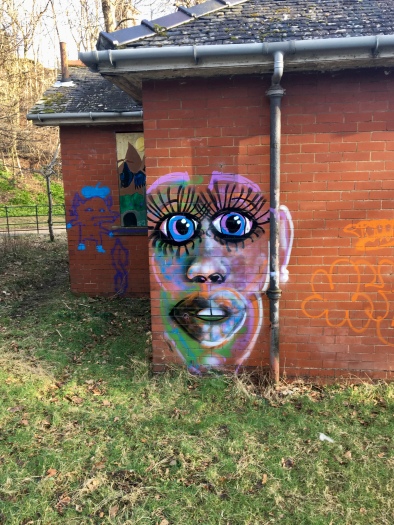 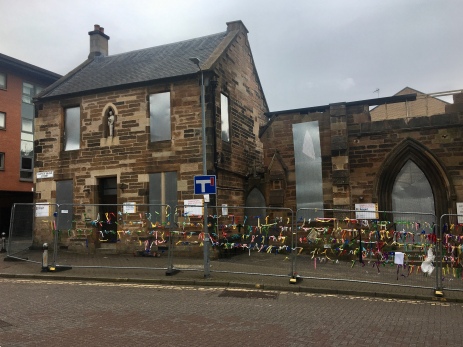 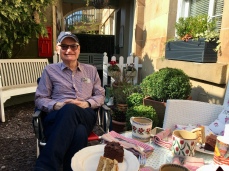 So it’s been a very busy March, and the weather  has co-operated beautifully, especially when it mattered. Let’s hope April brings more of the same – have a great month!