Sunday dawned wet. Bad news if you are looking for shelter on a Sabbatarian island where nothing will be open! We started with a walk round Tarbert, which took about two minutes, admiring the new distillery building (closed of course). There was nothing for it after that but to take a walk and hope for the best. In the end, we were lucky: the rain went off and we had a great day.

First we went to Scalpay, a small island to the east of Harris which, until 1997, required a ferry to visit, but which is now connected by a bridge. When it was formally opened by Tony Blair in 1998 this was the first time a serving Prime Minister had ever visited the Outer Hebrides, which seems rather shameful to me.

Our object was to walk to Eilean Glas lighthouse, according to our guidebook the most picturesque of all the Outer Hebrides lighthouses. It was certainly the first, the original tower being built between 1787 and 1789 by Thomas Smith, father-in-law of Robert Stevenson the first of the Stevenson lighthouse-building dynasty. Robert Stevenson himself added the present tower in 1824. (Robert Louis Stevenson is also from this family.) 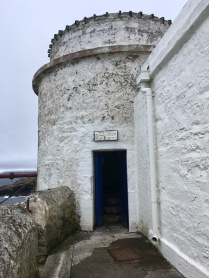 As we looked around, I was intrigued to see that there was still a set of washing poles on the green area behind the living accommodation. There are some Victorian washing poles on Glasgow Green, and I would say these are at least as old. 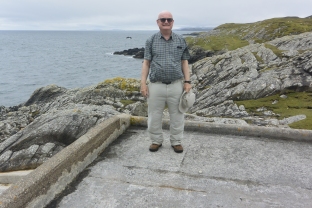 We had walked out to the lighthouse via the “tourist path” of about a mile. We took a more circuitous route back along the south coast and across open moorland. Although part of the Hebridean Way, the signage was, to say the least erratic, but the wind helped by blowing us most of the way back. 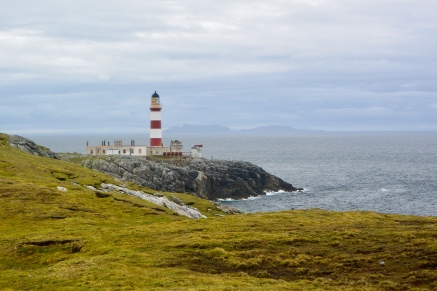 From Scalpay, we drove west to the Hushinish peninsula. A winding, up-and-down single track road runs for 14 miles to the end, with some surprising sights. First was a rather elegant chimney, the remains of a Norwegian whaling station built in 1912. Even more incongruous is the tennis court, the only one in Harris and, allegedly, the most remote in the world. It just wasn’t possible to stop on the road to take photographs of either of these, but the next day we visited the community shop at Leverburgh where there was a display of tapestries of Harris history which included them.

The road now ran parallel to a small river, then the next surprise loomed as we passed through an archway and found ourselves at the front door of a castle. Amhhuinnsuidhe was built by the Earl of Dunmore in 1868, and has counted JM Barrie (author of Peter Pan) among its guests. Through another arch, the old stables held a shop with an honesty box where we were able to buy drinks and snacks. Even on a Sunday. 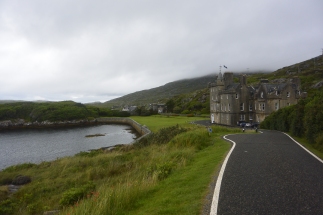 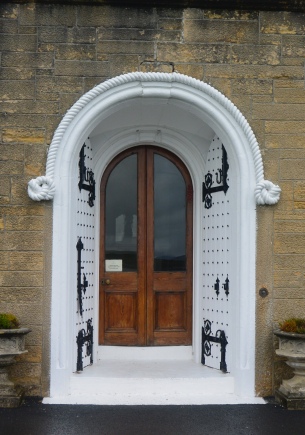 The road ends at the small settlement of Hushinish itself with its gorgeous sandy beach and (a final surprise) a beautiful new visitor centre with toilets and showers for campers. You can just see it centre-right below.

I was very impressed with the work of the North Harris Trust which has owned and managed the land for the community since 2003 (Scalpay became part of it in 2013). Tourists benefit too from its efforts (such as the path to the lighthouse and the new visitor centre). If (when) we return to Harris I would love to spend more time here. Although we enjoyed our walk round the headland at the end of the Hushinish peninsula, there were other trails leading off the road, including one to an eagle observatory, that I would like to have explored. However, it was time to head back to Tarbert for dinner and to pack up. The next day we were leaving for another island.