Autumn is well and truly here – above is my favourite splash of colour in the Botanic Gardens, as it changed from September to October.

More autumn colour: on a dry, crisp Sunday we took a walk to the nearby town of Milngavie (pronounced Mulguy). The drive there would be completely urban – no gaps at all – but we can walk all the way from our house along the River Kelvin and Allander Water. This also doubles the distance from 4 miles to about 8! We got public transport back, needless to say. 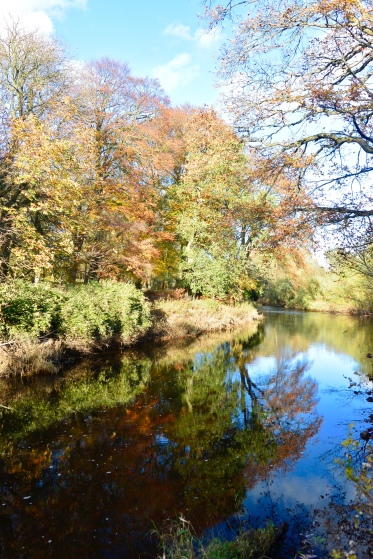 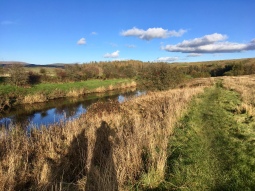 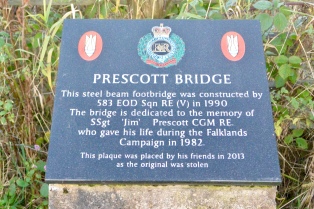 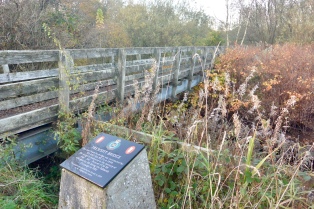 Re the last two pictures above – what on earth is wrong with people, stealing memorial plaques? I despair.

October also means the end of the guided walk season, with my last one being in Garnethill, the first time the Women’s Library has run that walk since the Art School fire earlier in the year. We got as close as we could to the School, but had to change our route because there is still a cordon around it.

As one walker observed, even the scaffolding looks like a work of art, and the stop sign definitely is one.

The cultural highlight of the month was 306: Dusk, the final part in the National Theatre of Scotland’s trilogy of plays about the First World War. The title comes from the 306 soldiers who were shot for “cowardice”, or what would now be diagnosed as post-traumatic stress disorder. Even at the time, officers such as the war poets Siegfried Sassoon and Wilfred Owen were diagnosed with shell shock and treated (though both later went back to the front line where Owen died in November 1918). The class system was rigidly in place.

In 2016 part 1, 306: Dawn, told the stories of some of the condemned men. Last year part 2, 306: Day, gave voice to the women and families at home, many of whom were shamed into changing their names and leaving their communities. This year’s play tells three stories in a series of overlapping monologues: a school teacher of the present day, a veteran of the Iraq War and a soldier who turns out to be the last of the 306 to be shot, just days before the armistice. Only in the final scene do the characters interact and the connections between them become explicit. The name and date of death of each man is projected onto the backdrop, accompanied by a choir singing out the names.

As we reach the centenary of the end of the Great War, it’s important to remember all its aspects, including these men who have been more or less erased from history. In 2006, then defence secretary Des Browne, announced pardons for the 306, for what that’s worth. The presence of the Iraq War veteran, clearly suffering from PTSD, questions how much better society has become at dealing with traumatised soldiers. He wasn’t shot, but his life fell apart and in some ways his was the saddest story. Overall, the trilogy was thought-provoking and intensely moving. 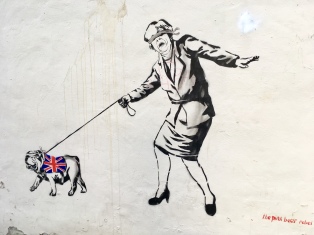 Exactly a year ago I found a new piece of street art by Pink Bear Rebel (Free WiFi, above). That wall has since been scrubbed clean, but this month I found a new one – a blind-folded Theresa May being led by a blind-folded British bulldog. A neat piece of political commentary, and top marks for the facial expression which is spot-on. The body looks all wrong to me though, too short and stout. I can’t remember who said that Mrs May always looks as if she has been illustrated by Quentin Blake but I heartily agree. His characters tend to be long and gangly: she might be in this picture, for example.

Time for Scottish word of the month! Over coffee with a couple of friends I observed of an organisation with which we are all involved that they “couldn’t run a minodge”. Blank looks – well they are both from Edinburgh, and I admit the phrase puzzled me when I first came to Glasgow. The word is derived from ménage, French for household, but has acquired various spellings according to local pronunciation. In the days before widespread credit, minodge took on the meaning of a self-help savings scheme whereby everyone made regular payments and took turns at getting the whole amount. So if you say someone “couldnae run a minodge” you are calling into account their competence. I put my alternative, couldn’t run a piss-up in a brewery, to my friends but they considered that vulgar. I did say they were from Edinburgh …

So November has arrived and we are hurtling towards the end of the year. The next Gallivant will probably be quite wintry. Have a great month.