I’ve had the Spirit Animal Blog Award on my back-burner since May while I perfected my Tibet series. Apologies Marcia! Anyway, here it is now, though, as is my wont, I haven’t quite stuck to all the rules.

1.) Thank the blogger who nominated you and link back to their page. Marcia Strykowski is a children’s author and librarian, but she blogs about all sorts of other things too – art, history, music and travel. Sometimes they combine – my favourite recent post is Girls Reading Books, a collection of artworks of (you’ve guessed) girls reading books. So many thanks to Marcia for choosing me, and please check out her blog.

3.) Write a short paragraph about yourself and what your blog means to you. I don’t want to write too much here because I’ve answered similar questions before. I’m a retired librarian and used to be responsible for buying children’s books, so you can see where Marcia and I find things in common. Basically, my blog serves as my travel diary. I want to look back when I’m 100 (why not have ambition?) and relive my adventures. Well, maybe not the Tibet one.

4.) If you could be an animal, what would it be? Although I would say I’m an animal lover, I’ve only had four pets in my life. Would you like to hear about them? Well, you’re going to anyway!

This is me, aged two. Look carefully on my shoulder and you will see Boris the Budgie. Don’t ask me why he was called Boris, he came already named. A few years later, he fell off his perch and we buried him in a shoebox in the garden. It was my first experience of death and I found the idea of burial very puzzling. Would I like to be a budgie? No, too bird-brained.

Fast forward a few years, almost a decade probably, and we got a dog, Mandy, a beautiful Basset Hound. Beautiful, but daft as a brush. Would I like to be a dog? No, too many walkies in the rain. 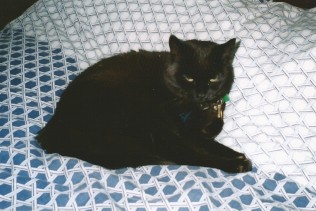 John and I have had two cats, Purdy (grey and white) and Sally (the black one). Cats are fascinating. Their brains are the size of walnuts yet can produce towering – and very different – personalities. There are tales to be told about both these cats! Maybe someday. When Sally died we decided not to replace her to leave us more free for travelling. I sometimes regret that, but eight years later we’re still holding firm. Would I like to be a cat? I think so! You know the saying, dogs have owners but cats have staff. I would be happy lolling around in the sun or on a comfy bed with a tame human to cater to my every need.

Back to the rules:

5.) Pick and notify ten nominees. I never do nominations. However, I like to give shout-outs to blogs that I enjoy on a similar theme. So for animal lovers:

Travels with Choppy. Choppy the dog is the star but she has recently acquired a feline sidekick, Schooner. You won’t believe the things they get up to! Sarah, their human, has a fertile imagination.

Zombie Flamingos. Great title! Emily lives in Victoria, BC, and blogs about all sorts of things. However, rarely does a post end without the most important thing of all: pictures of her kitties.

Brian, Ardbeg and Lily. I don’t have a dog, and don’t intend to get one, so why do I enjoy Alex’s blog about living with, and training, rescue dogs so much? The pictures, yes, but there’s also a lot of wisdom in it. Turns out getting the best from dogs can be very similar to getting the best from people.

So those are my answers. They’ve been fun to write because this is so different from my normal posts. Thanks once again to Marcia for the nomination.