After a few days in Lerwick we moved north to Busta House, exploring the Mainland’s Westside on the way. It has a couple of Neolithic sites – Scord of Brouster, a settlement from c 2000 BC, and Staneydale Temple from c 3000 BC. The latter name was made up by the archaeologist who excavated it, but it almost certainly wasn’t a temple – more likely a communal building or the house of a chieftain. 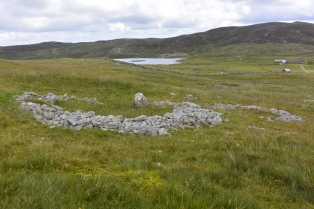 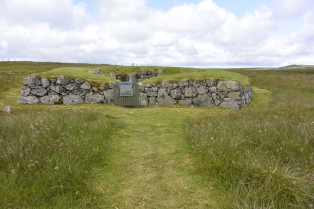 After exploring the ruins, we had worked up an appetite but there aren’t many cafés on the Westside – in Walls, the café is a moveable feast and that day it was based in the Methodist Church. It was so busy that we couldn’t find anywhere to sit, so we headed into the village and purchased a typical (?) Scottish lunch from the bakery. Macaroni pie! Surprisingly tasty. There had also been a wedding locally and we admired models of the happy couple.

The Westside coast is beautiful, as we found on a circular walk from Huxter. (See Sandness at the top of the post for another example.) We started at a row of ruined watermills, such as this one:

…until we could look down over Banks Head.

From there, we made our way along the ridge and dropped back down to Huxter via Scammi Dale, savouring the great views to the island of Papa Stour.

The Westside ends at the pretty harbour of Voe – you couldn’t walk too far along the pier for fear of disturbing the inhabitants.

Busta House, our home for the next three nights, is somewhere we have stayed before. Nineteen years ago, it felt as though it was in the middle of nowhere. Now the town of Brae, home to many of the workers at Sullom Voe Oil Terminal, is creeping out to meet it. 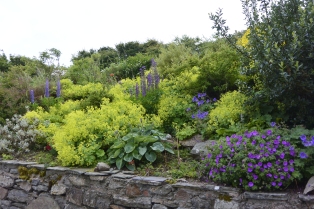 Once inside, you are surrounded by history. The earliest part of the house was built in 1588 by the Gifford family, who gained in wealth until the 18th century when a death and a disputed marriage dissipated their fortune. The wronged wife, Barbara Pitcairn, allegedly haunts Busta, though I never saw any signs! You can read the full story on the hotel’s website.

The house was bought in the 1950s by Sir Basil Neven Spence, the local MP. He rescued some gargoyles from the House of Commons in London which were about to be discarded because they were damaged by wartime bombing. These gargoyles are still in the gardens of Busta House – you can see one in the gallery above.

The northern part of Shetland’s Mainland is lovely for walking (isn’t it all?) as you’ll find out in a later post.