A patch of autumn sunlight hits the Ben from across Loch Lomond. To the right is berthed the Maid of the Loch, patiently awaiting restoration. Linked to Becky’s January Squares challenge – words ending in light.

So here I am playing catch-up in January with my December round-up. I hope, like us, you’ve all had happy times with family and friends over the festive season. I hope also that you didn’t get too blootered (one of many Scottish synonyms for, ahem, over-refreshed).

Weather-wise, it wasn’t great here, the brightest and best of it being Boxing Day when John, Mum and I took a trip to Loch Lomond. When we arrived, Ben Lomond had its head in the clouds. By the time we left, it was clear and beautifully lit. 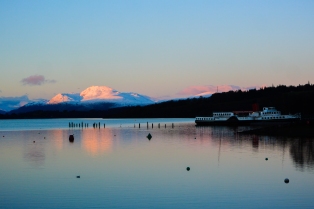 I had one totally unexpected gift that I want to share with you because it is so amazing. One of John’s PhD students presented him with this fabulous shawl which his mother (in China) had made for me. Apparently it took her 6 months, which I can well believe – I’m touched that she was so generous with her time for a complete stranger.

In between Christmas and New Year, we had a few nights in Aberfeldy, a small town in Perthshire, which will probably make it onto the blog – eventually. In the meantime, here’s the pretty central square.

I took my annual look at my WordPress stats and discovered that, for the first time, page views are down on the previous year. Before I started to feel too unloved, I remembered that this was probably because in 2016 I was (mostly) posting twice a week, whereas in 2017 I was (mostly) only posting once. So I dried my tears and decided things weren’t so bad after all. The most read post in 2017 surprised me, because it isn’t particularly spectacular – Glasgow canal walks, which leads neatly into the “ones that nearly got away”. I have several posts that almost got written, and probably won’t now, one of which is a walk along the Forth and Clyde Canal in October, this time near Kirkintilloch. It was a bright, still day with wonderful reflections.

I also noticed that three of these monthly round-up posts made the top ten last year, so I shall take that as encouragement to keep on with them. In 2017, according to my Fitbit stats, my gallivanting led to me walking almost 1700 miles. I’m not sure I believe that, but it sounds impressive! If I keep it up I should have plenty to write about.

Here’s a heart-warming little story. I use my local station a couple of times a week and often see the same black and white cat wandering around. Eventually, I discovered that he is so well-known that he has his own Twitter account, ScotRail has appointed him Cat Controller and the adjacent hospital, which he also patrols, has made him an Honorary Purrfessor! Apparently, his staff knew nothing about this alternative life until the local paper ran a feature about him. Then – cat-astrophe – the week before Christmas he went missing. Twitter went into overdrive, and eventually, almost three weeks later, he was found and returned home on January 2nd. I must say he looks rather sleek and well-fed, so I don’t think he’s been trapped in someone’s garden shed over the holidays. He maybe has another secret life – I remember a children’s book called Six Dinner Sid about a cat who conned six different families into feeding him. Hermes has probably read it.

⭐️CALL OFF THE SEARCH!!⭐️
I am home! 😸❤️🏡
Glasgow heroes Alana @alhal6 and Ross saw me safely returned to my house humans this evening!#FindHermes – JOB DONE!
😸🐾🍾🥂 pic.twitter.com/nVl0wEeKHk

Finally, I’d like to thank everyone who has followed, read, commented on, or liked posts in 2017 – it’s been a pleasure to be part of such a friendly community. Special thanks this month to Karen of Profound Journey, who made me one of her Favourite Blogs and Channels of 2017. If you don’t already know her, please give her a visit now, especially if “you are a woman who has made everyone and everything else priority #1, and now, finally, you are going to put yourself on the map” – and even if that doesn’t apply to you, it’s still a good read!

So now the holidays are over, it’s back to auld claes and parritch (old clothes and porridge). All the best for 2018 everyone.

A sunny Sunday in September found us walking at Balloch Castle Country Park and Whinney Hill Wood. Jude’s Bench Series this month is looking for occupied benches and you’ll find several of those here, and I’m also linking to Jo’s Monday Walks. Check both blogs for a virtual exploration of the world, its walks and its benches. 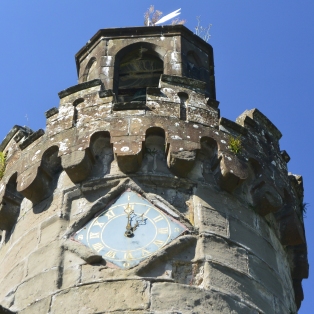 Balloch Castle is an early 19th-century country house at the southern tip of Loch Lomond. It now looks rather neglected (see the weeds growing out of the clock-tower above) but its estate has fared better – it has been a country park since 1980 and part of Loch Lomond and The Trossachs National Park since 2002. As we walked along, we saw the float plane from Glasgow landing in the loch and a fine display of fungi.

Once past the castle, we struck off up a pathway to Whinney Hill Wood in search of a viewpoint over Loch Lomond. On the way, we came across a single-person bench – or is that just a seat? We were intrigued – only one person could have a rest at a time? Even stranger, we found another two at separate points en route. Why not just put them together so that people can be sociable? Anyway, here’s the first one both occupied and unoccupied.

Eventually, we reached the viewpoint:

However, the only way you could actually see the loch was from the handily placed bench. Now, Jude’s specification says occupied benches, which this certainly is, but the small print mentions seated, so will I get away with it? I was snapping John taking the view when he turned the camera on me. 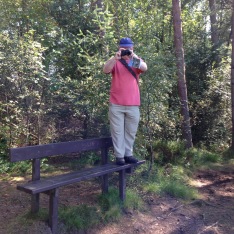 After descending back into the park, we walked alongside the loch which I think gave better views than the viewpoint anyway.

The castle came back into sight from the other side …

…  and we explored its walled garden. Oh no! An unoccupied bench! 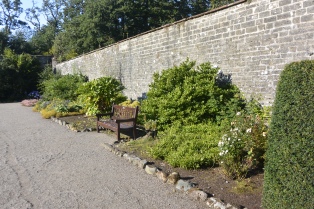 Finally, we watched the Astina emerging from the River Leven to take its passengers for a sail on the Loch.

When Saturday dawned dry, we set off for the small village of Balmaha on the eastern shore of Loch Lomond. We’ve visited many times and always have lunch in the Oak Tree Inn, which is not necessarily the best idea before climbing the nearby Conic Hill, but we can’t resist.

New to the village is the statue of Tom Weir (1914-2006): climber, writer, broadcaster and campaigner for the Scottish countryside. Naturally, I had my photo taken with him.

This gave our lunch a small amount of time to digest, so we set off up the hill. It’s only 1200 ft / 350 m but quite steep all the way. The path is well-defined though – at the beginning, it starts off as steps – and the views over the Loch open out quickly.

The chain of islands you can see here follow the Highland Boundary fault (which also formed Conic Hill): Inchcailloch, Torrinch, Creinch and Inchmurrin. In the other direction, the summit is now visible, though you don’t have to climb that steep lump directly – there’s a (slightly) more gentle path snakes its way round the back.

In search of the best view

Finally, here’s John on the summit itself. When we got back down, we followed part of the West Highland Way as it climbed above the Loch for another good viewpoint, then it was back to Glasgow to rest our weary feet. It’s a mere 40 minute drive to get back to the heart of the city, which is one of the reasons why it’s such a great place to live.

I’m adding this post as a contribution to Jo’s Monday Walks (click the logo for more details). Her latest walk will make you feel much warmer than mine – it’s in Portugal! Check Praia da Rocha for a great beach walk.

Most people will know the song and could guess from the title that we have been to the bonnie, bonnie banks of Loch Lomond. Devotees of the long-defunct STV soap will be able to pinpoint our visit to Luss, though in this case it was just to use its very spacious (and expensive) car park. We were setting out to walk the Glen Striddle Horseshoe. Loch Lomond looks very pretty on the way up (see above). However, the best views are those of Ben Lomond and the Arrochar Alps from the top of Beinn Dubh. This is a Graham summit, Grahams being hills between 2000 and 2499 feet, and the whole circuit is about 7 miles. We had a good day for it (Sunday, 15th April), as the pictures below show. 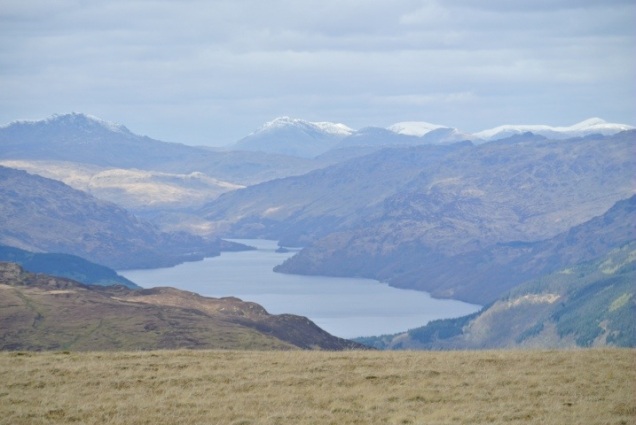 Last weekend, my sister and her two daughters were staying with my Mum and Dad so we needed a day out that was suitable for everyone from 12 to 80+. Loch Lomond lends itself to visits at all sorts of activity levels. Loch Lomond Shores, gateway to the National Park, while not being terribly exciting is a pleasant place to wander around and we ended up spending most of the time there. The shopping mall, including a branch of Jenners, is attractive and there are several places to eat. We had coffee in Jenners and lunch in the Kilted Skirlie on a balcony overlooking the Loch with lovely views of Ben Lomond. I even got sunburnt, which wasn’t part of the plan and quite a surprise given the usual Scottish weather.

We walked round to the Maid of the Loch, at Balloch Pier, the last paddle steamer built in Britain (1953): 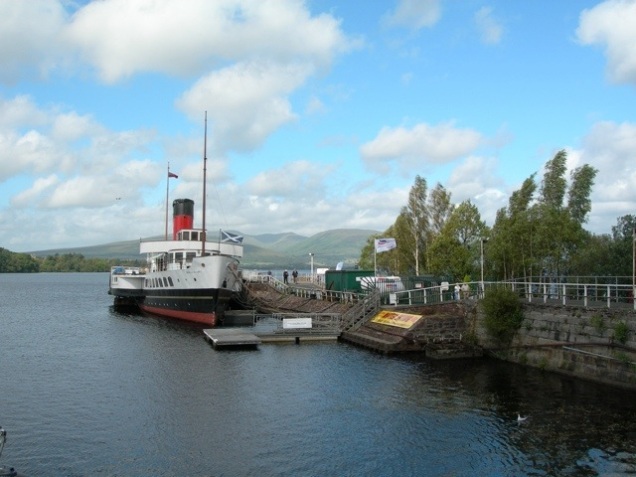 The hope is to get her operational again by 2013, but she’s been under restoration for years so I don’t know how feasible that is. In the meantime, she can be hired for parties.

At the other end of the site, we came across a group of young men learning Scottish country dancing and caber tossing – maybe a stag party or team building group. I’m not sure if they were meant to provide entertainment for the masses but that’s exactly what they were doing!

There is a Sea Life Centre there too, but we decided we didn’t have time for that and moved on to Luss, a very pretty little village where the Scottish soap Take the High Road used to be filmed. The view of Ben Lomond from the pier is even more beautiful than the one from Loch Lomond Shores. 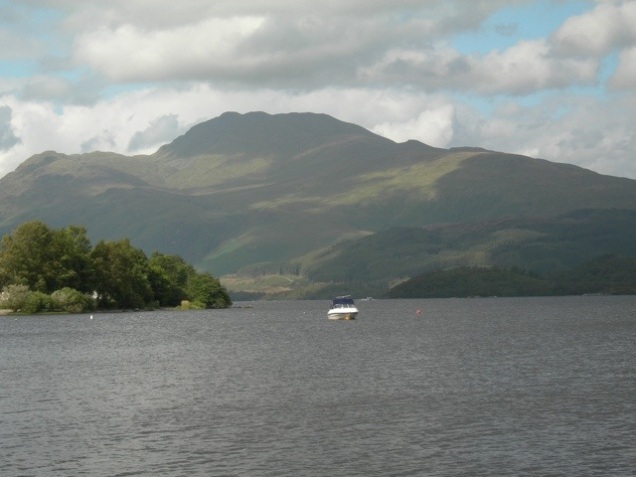 So if you are energetic, you will want to climb the Ben, and there’s also a very nice horseshoe walk in the hills behind Luss (Beinn Dubh – Glen Striddle), but if you can’t do that you can still while away a few pleasant hours just looking at the mountains from below.