So here I am playing catch-up in January with my December round-up. I hope, like us, you’ve all had happy times with family and friends over the festive season. I hope also that you didn’t get too blootered (one of many Scottish synonyms for, ahem, over-refreshed).

Weather-wise, it wasn’t great here, the brightest and best of it being Boxing Day when John, Mum and I took a trip to Loch Lomond. When we arrived, Ben Lomond had its head in the clouds. By the time we left, it was clear and beautifully lit. 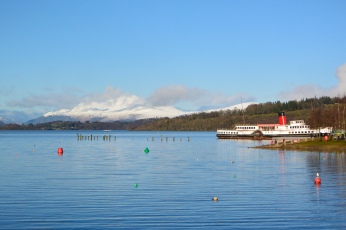 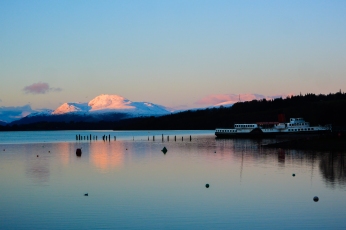 I had one totally unexpected gift that I want to share with you because it is so amazing. One of John’s PhD students presented him with this fabulous shawl which his mother (in China) had made for me. Apparently it took her 6 months, which I can well believe – I’m touched that she was so generous with her time for a complete stranger.

In between Christmas and New Year, we had a few nights in Aberfeldy, a small town in Perthshire, which will probably make it onto the blog – eventually. In the meantime, here’s the pretty central square.

I took my annual look at my WordPress stats and discovered that, for the first time, page views are down on the previous year. Before I started to feel too unloved, I remembered that this was probably because in 2016 I was (mostly) posting twice a week, whereas in 2017 I was (mostly) only posting once. So I dried my tears and decided things weren’t so bad after all. The most read post in 2017 surprised me, because it isn’t particularly spectacular – Glasgow canal walks, which leads neatly into the “ones that nearly got away”. I have several posts that almost got written, and probably won’t now, one of which is a walk along the Forth and Clyde Canal in October, this time near Kirkintilloch. It was a bright, still day with wonderful reflections. 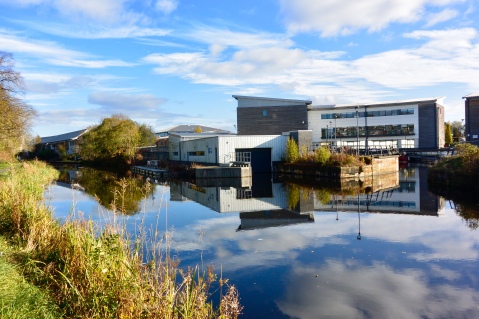 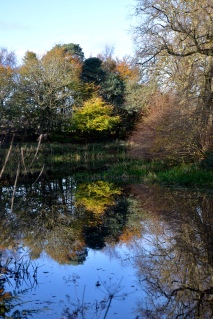 I also noticed that three of these monthly round-up posts made the top ten last year, so I shall take that as encouragement to keep on with them. In 2017, according to my Fitbit stats, my gallivanting led to me walking almost 1700 miles. I’m not sure I believe that, but it sounds impressive! If I keep it up I should have plenty to write about.

Here’s a heart-warming little story. I use my local station a couple of times a week and often see the same black and white cat wandering around. Eventually, I discovered that he is so well-known that he has his own Twitter account, ScotRail has appointed him Cat Controller and the adjacent hospital, which he also patrols, has made him an Honorary Purrfessor! Apparently, his staff knew nothing about this alternative life until the local paper ran a feature about him. Then – cat-astrophe – the week before Christmas he went missing. Twitter went into overdrive, and eventually, almost three weeks later, he was found and returned home on January 2nd. I must say he looks rather sleek and well-fed, so I don’t think he’s been trapped in someone’s garden shed over the holidays. He maybe has another secret life – I remember a children’s book called Six Dinner Sid about a cat who conned six different families into feeding him. Hermes has probably read it.

⭐️CALL OFF THE SEARCH!!⭐️
I am home! 😸❤️🏡
Glasgow heroes Alana @alhal6 and Ross saw me safely returned to my house humans this evening!#FindHermes – JOB DONE!
😸🐾🍾🥂 pic.twitter.com/nVl0wEeKHk

Finally, I’d like to thank everyone who has followed, read, commented on, or liked posts in 2017 – it’s been a pleasure to be part of such a friendly community. Special thanks this month to Karen of Profound Journey, who made me one of her Favourite Blogs and Channels of 2017. If you don’t already know her, please give her a visit now, especially if “you are a woman who has made everyone and everything else priority #1, and now, finally, you are going to put yourself on the map” – and even if that doesn’t apply to you, it’s still a good read!

So now the holidays are over, it’s back to auld claes and parritch (old clothes and porridge). All the best for 2018 everyone.