After seeing the mummified cat and rat the previous day, we managed to top it by not only seeing but touching the mummified corpse of an eight-hundred year old crusader! The poor chap was too tall for his coffin so his legs were lopped off below the knee and neatly placed beside him. This was in the burial vaults of St Michan’s, Dublin’s oldest north side parish church which was founded in 1095 (current building 1685). There are five vaults altogether, accessed through iron doors that look a bit like coal hatches, and you can enter two. The dry conditions and constant temperature, along with methane gas from rotting vegetation beneath the church, preserved the bodies, and when some of the stacked coffins toppled over the bodies fell out. You aren’t allowed to take photographs, but there are a few on the church’s website.

Walking along the north bank of the Liffey, we rather liked the street art, particularly the street-light box painted with books near the site of Dublin’s first free public library. We then visited Dublin City Gallery, the Hugh Lane, which was excellent. It has the actual studio of Francis Bacon, which has to be seen to be believed, and a very fine café. Just over the road (Parnell Square) is the Garden of Remembrance, opened in 1966 to commemorate the 50th anniversary of the Easter Rising.

After lunch, we headed south of the river to Trinity College, the famous Old Library and the Book of Kells. The exhibition is interesting, but it’s hard to see the actual book because it’s quite small and there are vast numbers of people crowding round its glass case. There’s more to see in the Long Room upstairs, which is less crowded and contains 200,000 of the library’s oldest books and manuscripts along with busts of eminent scholars. I think we appreciated this less than on our last visit (almost 20 years ago) because we had been to the Chester Beatty Library the day before which has far more on show. Outside, we liked the Campanile (Edward Lanyon, 1852-3) and the sculpture Sphere Within Sphere (Arnaldo Pomodoro, 1982-3).

Another day done – and dominated by churches and libraries again. This was our last night, but we still had half a day before leaving for our flight home. To be continued….. 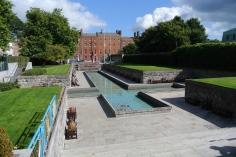 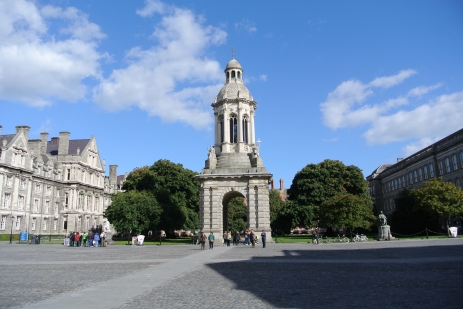 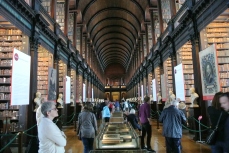 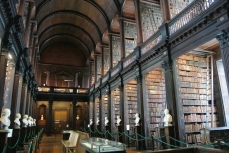