On the last day of our week in Yellowstone, we headed back to Geyser Country. The two guys above (there’s a second bison just going out of sight behind the trees) held us up for a short while. Most people were back in their cars by the time John risked this snap – some of them had been standing way too close.

The best thing we saw in our whole week in Yellowstone came right at the end of the day, but there was plenty to do before that. Just south of Madison we turned off onto Firehole Canyon Drive, a short detour leading to some pretty falls. 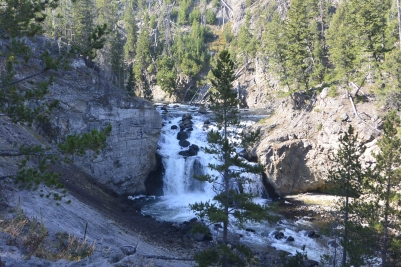 A few miles further on we reached Lower Geyser Basin. On one side of the road is Firehole Lake Drive. The main attraction here is Great Fountain Geyser (second picture below) but it wasn’t due to erupt till the afternoon and we didn’t have time to hang about. Plenty other things to appreciate, though.

Across the road is the Fountain Paint Pot trail. The Pot is full of thick, bubbling mud. 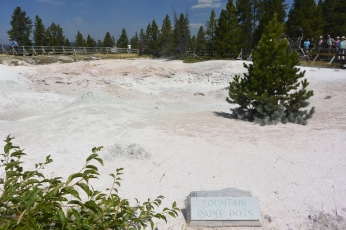 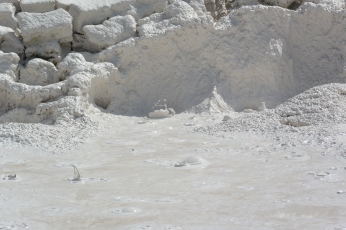 Red Spouter, below, has existed since an earthquake in 1959 which altered much of this landscape. It’s unusual in that it behaves like all four thermal features at different times of year. In spring and early summer it’s a muddy hot spring that might seem like a geyser at times as it splashes water several feet high. By summer and autumn, as the water table lowers, it becomes first a mudpot then a fumarole venting steam, as here.

Below Red Spouter is an area with several geysers. This is Fountain Geyser. 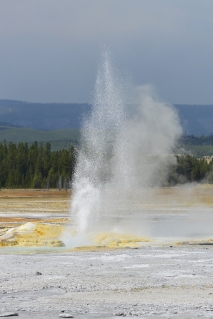 The colours in the basin are beautiful. We’d seen many trees such as the ones below on our travels, but learnt something new about them from the trail guide here. They are lodgepole pine trees which drowned in the super-hot water of shifting thermal activity. Silica penetrated and hardened the bases of the trunks leaving a white appearance, so they are nicknamed “Bobby Socks” trees.

There are two major features here. Excelsior Geyser Crater was formed when a huge geyser blew itself out of existence in the 1880s. The last eruption was a hundred years later in 1985, but it still discharges 4000 gallons of hot water per minute into the Firehole River. It may not look as spectacular, but it expels more in a day than Old Faithful does in two months.

And now for the pièce de résistance – Grand Prismatic Spring. At 370ft wide and 121ft deep, it’s Yellowstone’s largest, deepest hot spring and probably its most beautiful. I’ve never seen anything to rival it anyway. The water at 70C / 160F ensures it is usually cloaked in steam and the brilliant colours around it are caused by the microorganisms which live there. 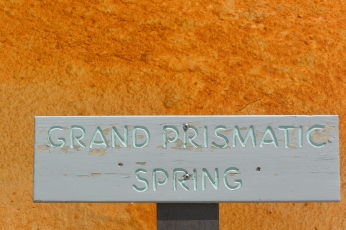 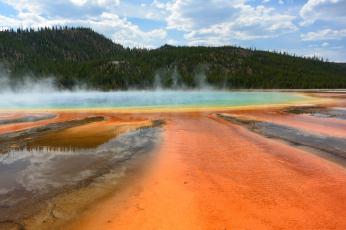 Could we top that? Not really. We made a quick stop at Gibbon Falls which we’d passed several times already without viewing, then it was back to Canyon Lodge for our last night.

We left Yellowstone the next morning with over a week of vacation still left. However, this seems like a good time to take a break and blog about something else for a while. I’ll come back to our US road trip after the New Year.