So, day two of Doors Open and, in contrast to yesterday, a lovely sunny afternoon. I’d planned a route with seven sites, but in the end we only managed five. We had to fit lunch and cake in, you see!

We set off walking from home and called in at Kelvinside Hillhead Parish Church. Like yesterday’s visits, this is somewhere I have walked past hundreds of times but never gone in.

If you think the outline looks familiar, it might be because it reminds you of the Sainte Chapelle in Paris – the plans for the church (completed 1876) were modelled on it.

An interlude for lunch then followed. Wudon Noodle Bar on Great Western Road was perfect – quick, friendly service and tasty food. We shared edamame beans to start then I had veggie noodles. Scrumptious – it’s not the number five Glasgow restaurant on Trip Advisor for nothing then.

Stop two was the Red Hackle Building on Otago Street, the former headquarters of Hepburn and Ross whisky company:

Red Hackle was one of their blends. The building is now a carpet shop, but you can still see the heraldic ceiling and the frieze of famous Scots painted for Mr Hepburn by Alex McGregor in 1952.

Next up – Lansdowne Parish Church (1863). You can see its spire in this view of Great Western Road (the nearer spire is St Mary’s Episcopal Cathedral). 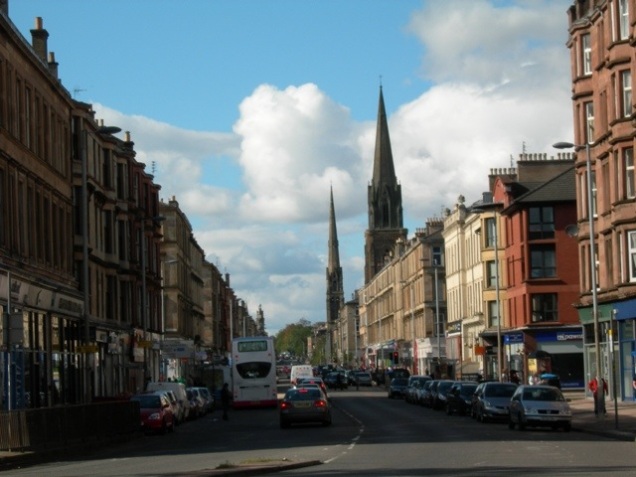 Off all the churches we saw over the weekend, this was the only dilapidated one – a charitable trust has been set up for its restoration. You can get an idea of its potential magnificence by going up to the balcony: 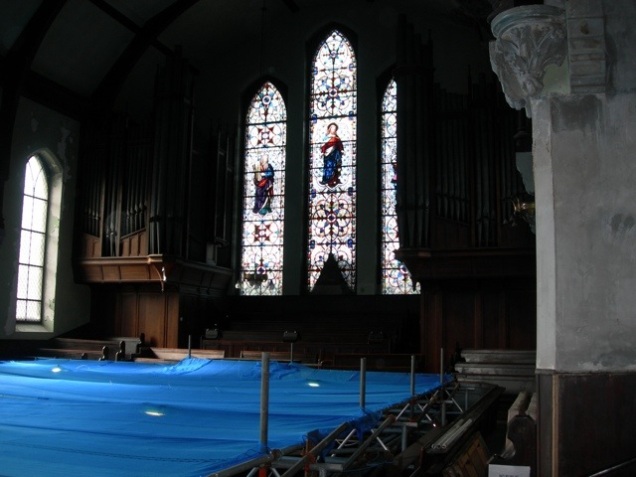 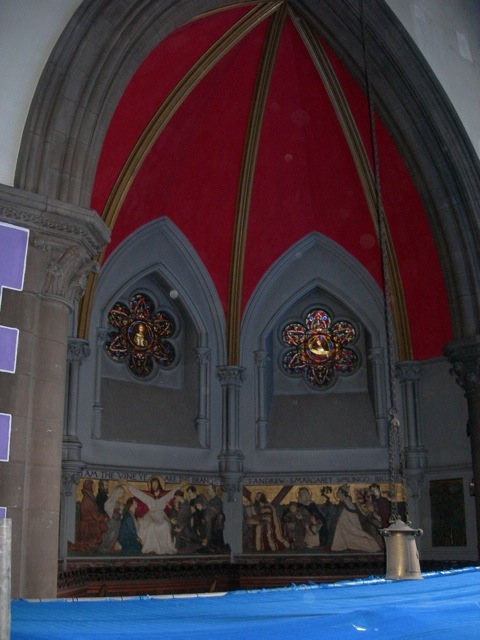 A couple of stops on the subway took us to the next church, St Andrew’s Cathedral, which, in contrast, was the most splendid. Originally built in 1816, it has recently been renovated and is light, airy and magnificently decorated. It also boasts Peter Howson’s portrait of St John Ogilvie. The lighting made this hard to photograph without glare, but I’ve included the picture anyway.

Finally, we went to Sloans. This has been a Glasgow institution since 1828 – three floors of venues: pub, tearoom and ballroom. Again, I’ve passed the entrance many times without going in, but this time I was a little disappointed. The ingredients are all there: vaulted ceilings, marble fireplaces and stained glass, and you get the impression that the layout hasn’t changed much over the years so it’s quite atmospheric, but it seemed quite shabby and in need of some tlc to restore it to its former glory. I did like this ceiling though, and the tiling on the Argyll Arcade entrance.

So that was our day – apart from the cup of tea and cake before we wended our weary way home. We saw some of the best of Glasgow, but we also saw the worst. There was an Old Firm match today and we were unfortunate enough to share a subway carriage with two foul-mouthed, bigoted “fans” singing sectarian songs. I exclaimed many times over the weekend about how lucky we are to live in such an amazing place, and I refuse to let boneheads like that spoil it. I hope nobody else does either.