In the 25 years I have lived in Glasgow, its Transport Museum has had three homes. The latest move is to the purpose-built Riverside Museum, opened earlier this year and designed by Zaha Hadid who has just won the RIBA Stirling Prize for another building, a school in Brixton. There are some good pictures of the museum on her website and also on the city council’s site. We’ve been waiting to go until we thought the novelty had worn off and it might be less busy, but it was mobbed this afternoon – Glaswegians do love their museums, which is a very good thing. Despite the crowds, however, we managed to see most of the exhibits and were there for over two hours.

So what’s the verdict? Positive, on the whole. I like the wavy shed of a building, although it’s not to everyone’s taste I know. Although I felt the exhibits were a little cramped, and were basically the same items I had seen before, there were definite improvements – the vehicles were enhanced by more social exhibits, particularly those from the city’s costume collection which doesn’t have a home of its own. The period street has been extended and you can actually go into the shops and cafe instead of just peering in the windows. Here’s one end of the street with the Dalmarnock tram:

I’m not so sure about the wall of cars – they look good, but when you are close enough to read the captions, you can’t see the cars they are referring to:

The museum is situated at the point where the Kelvin flows into the Clyde. Berthed outside is the tall ship, Glenlee: 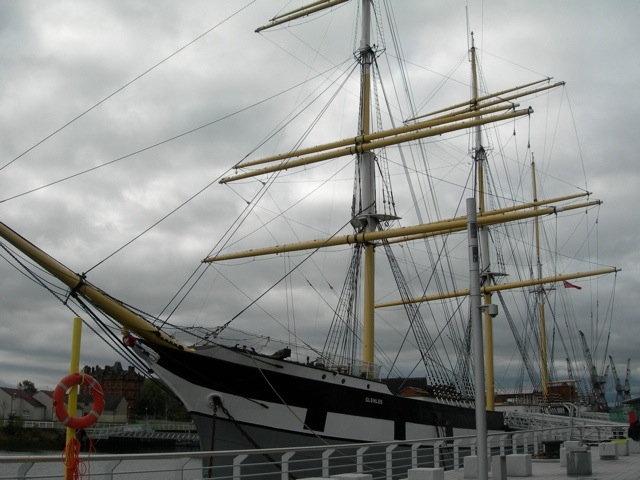 There’s also a good view up the Clyde to some other Glasgow landmarks:

From the left, the brick building is the old Pump House, now an Indian Restaurant with karaoke. Next to that is the curved Clyde Auditorium, commonly known as the Armadillo. The tall building is a hotel and behind that the Squinty Bridge peeks out. It also has an official name, but no self respecting Glaswegian would use it so don’t try asking for directions via the Clyde Arc, you’ll probably get a blank look. Across the river are some flats, and the final building on the right is BBC Scotland.

I have always thought Glasgow didn’t make enough of its riverside compared to other cities I have visited, but in recent years that has begun to change and this museum is a very welcome addition to its attractions.