Cats, curry and a camp

In 1968, two 11-year olds started secondary school at Rutherford in Newcastle-upon-Tyne. Coming from different primary schools they didn’t know each other, but they ended up next to each other because seating in the form-room was arranged alphabetically and both had surnames beginning with M. Decades later, the friendship forged that day is still going strong and was picked up again this last weekend. Yes, those 11-year olds were me and my oldest friend. We visit each other year about, and this time it was our turn to go down to Valerie and Kenn’s in Bramham, Yorkshire.

V & K have two cats, Tiger and Dipsy. We love cats, but didn’t replace the last one who died over 3 years ago, so it’s always nice to stay in a feline-inhabited household. These two are fine with humans, but the best you can say about their own relationship is that they tolerate each other. 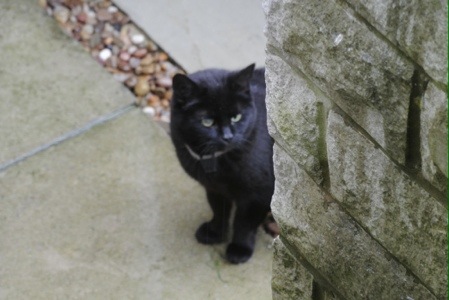 After we arrived on Saturday, we went into Wetherby for a curry. The Jaflong Tandoori was good and reasonably priced, though not up with the best in Glasgow. Well, I would say that, wouldn’t I?

Sunday was bitterly cold and bore no resemblance to June. Eden Camp, seen below, is a modern history museum based in the original huts of a Second World War prisoner of war camp, so there was nothing so fancy as heating and I froze. There was a lot to take in and it was very interesting, but my brain just went numb after a while. Maybe I should go back some time in the summer? Oh wait….