We’ve lived in our present house for nearly twenty years, and every time we leave it we pass this at the end of the road, yet we’ve never been in:

Doors Open Day seemed a good chance to rectify this so we visited on Saturday morning. The Scottish Mask and Puppet Centre has existed since 1981 and has been in its current premises (an old council cleansing depot) since 1989. It’s a lot more attractive inside than it looks from the outside! They do puppet shows, birthday parties, workshops with schools, exhibitions, training and much more – check the website for details. We met founder Malcolm Knight, manager Sarah Lee and Ken Barnard who, at 90 years old, is still carving marionettes in the workshop. Definitely worth a visit, especially for those with small children.

The Theatre and the masks on its walls:

The Café and exhibition area: 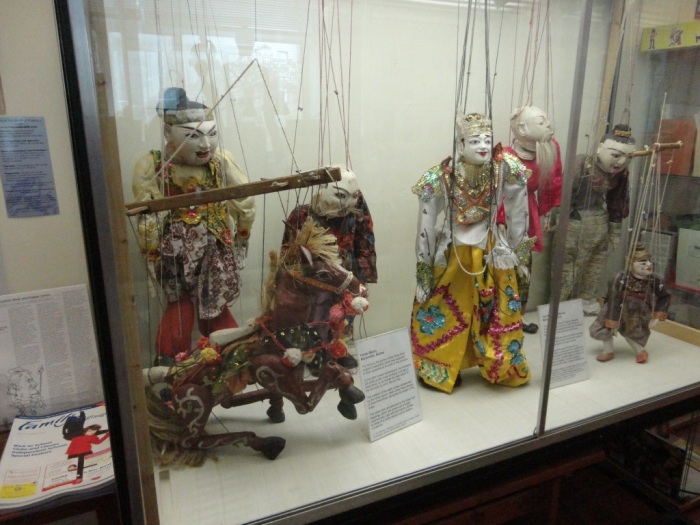 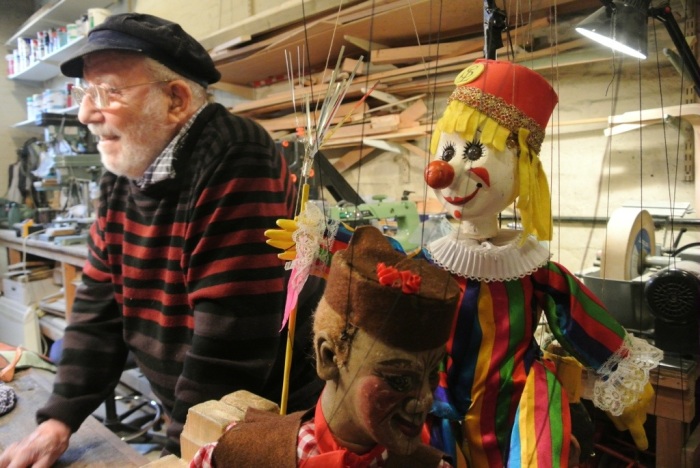 After this, it was on to Maryhill Burgh Halls, which I blogged about on an earlier visit. This time they had special events on for Doors Open Day and we went to a talk by Alec Galloway on the stained glass, old and new. When opened in 1878, the halls had 20 stained glass panels by Stephen Adam, depicting the trades then carried out in Maryhill. It must have been a hive of activity. Ten of the panels are now back on display – here are a couple of examples, the Iron Moulders and the Calico Printers:

What surprised me is that there seems to be no documentation from the time to identify the exact locations and the people depicted in the panels, and no pictures of them in their original positions in the Hall. Research has come up with some likely possibilities and there’s an interesting booklet you can pick up to read about it. There’s also a display in the foyer of miniature replicas of all 20 panels set against a map showing roughly where the businesses were that they are thought to represent. What is known, is that they were ahead of their time, as most stained glass at this time was in churches and showed religious subjects. I think their simplicity is modern too, and you would not be surprised if you were told these were the new designs.

Alec went on to talk about the new panels which he designed and created. The brief was to reflect Maryhill as it is today, but not to replicate the style of the original glass. After much research and workshops with local people, not to mention time spent in Jaconnelli’s café, ten themes emerged for the panes. Techniques used included screenprinting photographs onto the glass with fascinating results – as with the original glass, you can pick up a booklet in the halls to find out more. Here are the Space Age and Regeneration panels:

The first has a QR code in the corner, which actually works, making it possibly the first interactive stained glass panel in the world.

Because we had other things going on over the weekend, that was all the Doors Open we had time for this year, but we made the most of what we had and learned a lot from both visits as well as enjoying them.