We didn’t quite get Burlington right. I’m sure we chose it because of its location on the shores of Lake Champlain (on the boundary of Vermont and New York State) but, aside from an after-dinner stroll when it was too dark to see much, we made no use of the water at all. For this I blame Shelburne Museum. Shelburne is on the way in to Burlington – it’s hard to tell where one ends and the other begins – so we thought we’d “do” the museum on our travel day. We arrived at 2pm and left when it closed at 5. Tickets are good for two days so we thought we’d finish it off the next morning – and left in late afternoon again! What was so good about it that we stayed a day and a half?

Shelburne is an outdoor museum with 37 buildings in 45 acres of parkland. What we hadn’t realised was that not only were the buildings historic (either moved from elsewhere or replicas), they were full of an amazing variety of exhibits – about 80,000 in total. The museum was founded in the 1950s by Electra Havemeyer Webb whose wealth must have been immense. The collections include paintings (several by both Monet and Degas to give you an idea of the quality), carriages, folk art, quilts, circus figures, furniture – and that’s just a few off the top of my head. The weirdest item though was the steamboat Ticonderoga which sailed Lake Champlain from 1906 until 1953 and which now sits in the middle of a lawn. We watched a video of how it was moved there – an immense feat of engineering which took months. As one guide said, Electra was not a lady who ever had to ask how much things cost, just how they could be done. Here’s the “Ti” in all its glory: 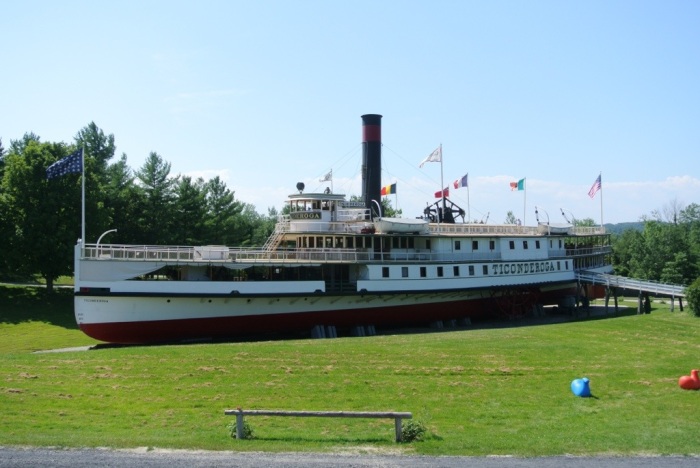 On our second day, we went up Mount Mansfield (4395 ft). Oh, ok, this is another one you can drive most of the way along a road which doubles as a ski run in winter. However, it was still a mile and a half from the parking lot to the summit, and although the height gained was a puny 600 feet it was very rocky and quite a scramble. I look pleased to have arrived.

We enjoyed our stay in the Willard Street Inn, a Victorian house with a lovely solarium as its breakfast room. 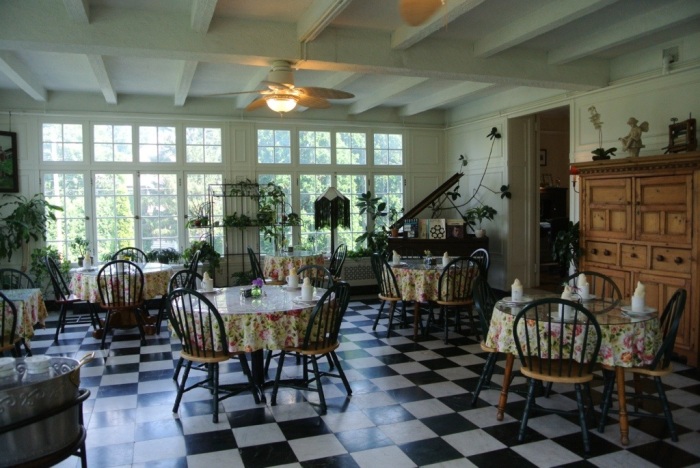 Burlington itself was an attractive 5 college town – our Inn was next to Champlain College and the University of Vermont was just up the hill. They both had very handsome, historical campuses which I’d liked to have explored given more time. The State Capital, Montpelier, had a similar “studenty” feel, although it’s much smaller – in fact, with a population of 8000 it’s the smallest capital in the US. We stopped for a walk around on our way out of the state, having first made sure we could pronounce the name. I knew it wouldn’t be the French way, but guessed Montpel-EER, whereas it’s actually MontPEELier. Being small hasn’t stopped it from having an impressive, gold-domed Statehouse though.

After we left Montpelier, we soon crossed the Connecticut River, which is the boundary with New Hampshire, heading for the White Mountains.