We arrived in Marlinton, Pocahontas County, via the Highland Scenic Highway. This was a beautiful road – we stopped at various overlooks and walked a couple of trails, for example Cranberry Glades, shown below, yet saw hardly a soul despite the huge parking lots seeming to expect more visitors. This was a theme throughout our stay in West Virginia – it really should be better known, it’s so pretty, but I gather it’s more of a weekend destination, and some areas get more trade in the Fall and skiing seasons.

We had actually visited Marlinton before. On our 2008 trip we stopped for lunch in the Dirt Bean Café and went to the Visitor Information Office, but this time neither venue was where we expected so we took a while to re-orient ourselves. It turns out that Visitor Info had moved, and there had been a fire at Dirt Bean – but its owner was working at the B&B we stayed at, Locust Hill, while she waited to re-open. I think she and Dave, the B&B owner, were surprised that we had not only chosen to visit West Virginia, but to do it twice. Again, this was a theme of our whole visit – “you mean you’ve come all the way from Scotland to here!” One guy said that if he ever got out of West Virginia he would never come back. Maybe it’s different if you live there, but we thought it was wonderful.

Anyway, back to Marlinton. Locust Hill was excellent. At the weekend, it also operates as a pub / restaurant, so another time I would try to stay Friday to Monday so that we could eat there every night. Dave is a good cook!  We arrived on a Thursday so had to eat out and the rest of the town doesn’t have much choice.

On our first full day we visited Cass Scenic Railroad to take a steam train on the old logging line to Bald Knob, a 4.5 hour journey of 11 miles each way and about 2000 feet change in elevation. Half way up, there was a stop to view Whittaker Camp, a recreated 1940s logging camp –  in the gallery below you can see the kitchen / dining car and surveyor’s shanty with its walls lined in cardboard for insulation. The caboose, along with another two on the mountain, could be hired out for an overnight stay – definitely a cut above the shanties, but still rather too Spartan for my taste. The brakeman (or woman in our case) in each car had a hard job on the way down, constantly leaning out over the track to check the wheels weren’t locking, then adjusting the brakes if they were. It was interesting, if hair-raising, to watch. 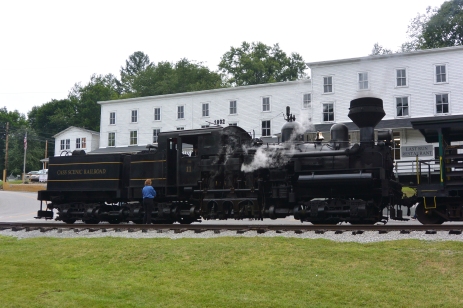 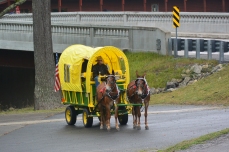 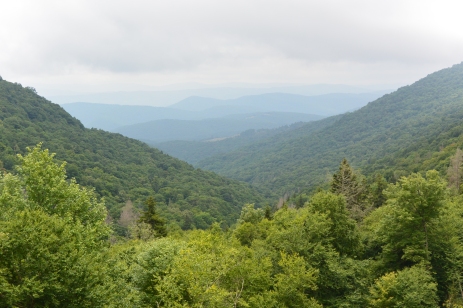 On our other full day, we visited three State Parks, linking together trails to hike a total of nine miles or so. The most interesting was Droop Mountain Battlefield, a combination of hiking trails with Civil War history which I always find haunting. In Watoga, the biggest park in WV, we followed the Ann Bailey Trail. I was amused, though possibly shouldn’t have been, at the headstone to Forest Workman which I first took to be a generic monument, but he was a real person. Hmm, not a great choice of name by his parents! The spectacular fungi were out in force in both parks – the pale yellow one was hard and solid to the touch. Weird! The final park, not pictured, was Beartown which consisted of a board walk amongst unusual rock formations and massive boulders making it hard to get a photograph to do it justice. 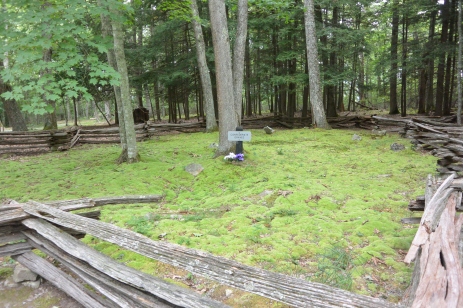 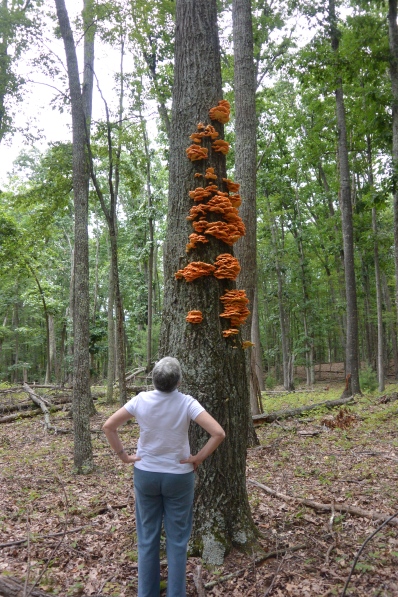 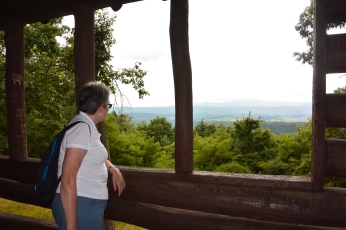 On our way out of Pocahontas County we visited the National Radio Astronomy Observatory at Green Bank. As soon as our guide opened her mouth I knew where she was from – Durham, very close to where I grew up in North East England. She was one of only four “Brits” I can remember meeting in West Virginia – and all were settled and working there. I guess this post sums up our experience of a State which is not a big tourist destination, especially for non-Americans,  with lovely people who are a bit self-deprecating about its attractions. Maybe I shouldn’t have written about it at all in case you all go and make it too busy next time we decide to visit! 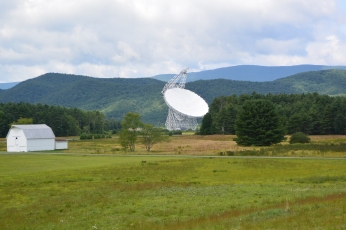 We had one more destination in West Virginia, and headed north to Davis.