On a recent visit to Glasgow Green, I spotted this unusual wooden bench in the garden outside the People’s Palace. I don’t remember noticing it before, nor the statue of the Pied Piper (shown below with the former Templeton’s Carpet Factory in the background), but that’s probably just me being unobservant. Coincidentally, I had just read that Jude at Travel Words was looking for wooden benches for her monthly Bench Series, so I thought I’d enter that for the first time. 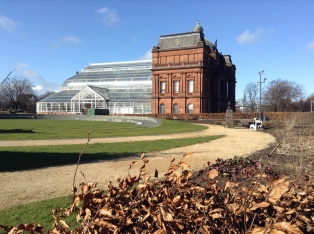 So what was I doing on Glasgow Green? I’d arrived for a rehearsal for March of Women, an adaptation of a suffragette pageant that I was taking part in to mark International Women’s Day. John McPhun, a timber merchant and East End councillor, helped to found the People’s Palace in the 1890s. His daughters inherited his sense of social justice and became suffragettes. Two of them – Margaret and Frances – were imprisoned in Holloway and subjected to force-feeding. They were featured in March of Women, played by Maggie McDonald and Teresa Cresswell respectively. 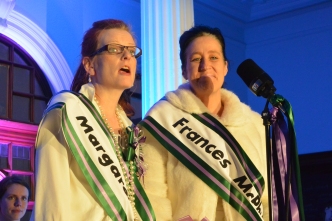 Interested? There’s a full account of March of Women on my other blog, Adventures of a Retired Librarian.