How often over the years have we driven north from Glasgow on the A81, noticed the little sign for Loch Ardinning Wildlife Reserve and failed to stop? Countless times – until Easter Sunday dawned bright and sunny and we were looking for a short walk not too far from home. Now we just can’t understand why we were so negligent for so long.

We started at the loch which has plenty of spots for contemplation. (I’ve also been very negligent about writing the walk up. You will spot several benches which were originally intended for Jude’s Bench with a View Challenge in April. Oops…) 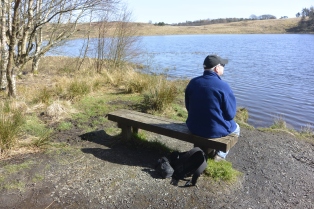 After leaving the loch, the walk rises onto moorland with good views towards Ben Lomond, then there’s a really boggy part around Black Linn.

At the highest point (172m) of Muirhouse Muir there’s a cairn and a bench, then another bench at the point where you start dropping back down to the loch. We spent time on both of these, admiring Ben Lomond and the Campsie Fells.

See that lumpy little hill on the right above? That’s Dumgoyne. I’ve climbed it several times, but after the last ascent swore never to do it again. It’s small but painfully steep and my knees just won’t stand it these days. However John misses it and, inspired by seeing it on this walk, he’s since done it twice on his own. As a bonus, here are some of his pictures. The little black dots by the path in the third one (click to enlarge) are people on their hands and knees. See my objection?

The walk starts behind the Glengoyne Distillery which is also worth a visit – AFTER the walk, unless you also want to go up on your knees. 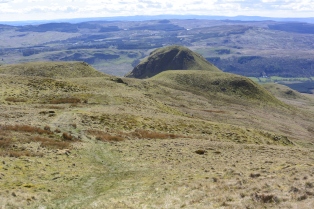 Linked to Jo’s Monday Walks – I wonder where everyone else has been this week?