Edzell Castle was built by the Lindsay family in the 16th century, with its beautiful walled garden added around 1604 (then restored in the 1930s). It’s had some famous guests – Mary Queen of Scots in 1562 (though can there be a Scottish castle she didn’t visit?) and her son, James VI, in 1580 and 1589. Unfortunately, mounting debts forced the Lindsays to sell up in 1715. Today, Edzell is run by Historic Scotland and has to put up with less famous visitors such as ourselves. They still send out a welcome party though – an unusually co-operative peacock who almost posed for his picture (though kept his tail unfanned). 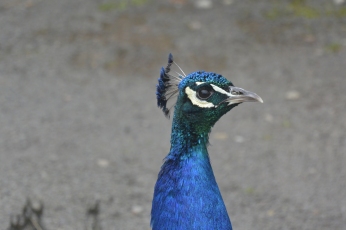 My favourite part was the garden walls which included little niches for flowers….

…. and heraldic sculptures and carved panels representing the Liberal Arts. 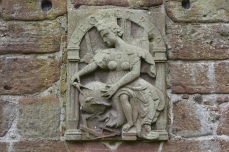 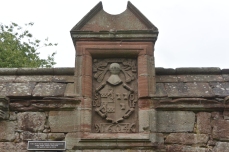 The garden itself looked best from above:

Edzell is in Perthshire, just north of Brechin and Montrose. We stopped off on our way to Aberdeen to catch a ferry – there’ll be much more on our destination to follow…..