After our Orkney adventure, we made the short ferry crossing from Stromness to Scrabster on the north coast of mainland Scotland. We were heading west to Tongue for a few nights, but stopped off on the way for a walk out to Strathy Point. 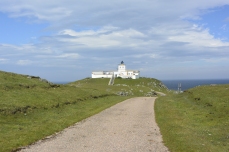 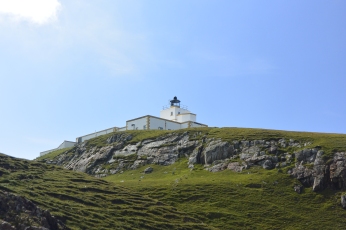 This was all familiar territory too. Last time we stayed in Tongue we walked out to Castle Varrich, but this time we merely admired it from afar as we arrived. 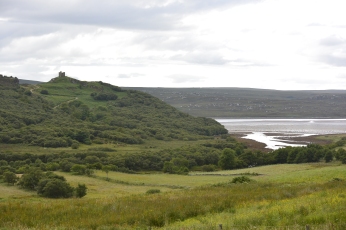 Our accommodation was impressive – the Tongue Hotel is a former sporting lodge, built in the late 1800s for the Duke of Sutherland, with many original features.

After a good night’s sleep, we awoke to what can only be described as a dreich day, so we decided to follow the Strathnaver Trail by car. This 24-mile loop east of Tongue, on mostly single track roads, passes historical sites from the Neolithic, Bronze and Iron Ages as well as from the more recent (1800s) Highland Clearances. There’d be plenty of scope for short walks if we got any dry spells in the weather.

We decided that, as the prehistoric sites were unlikely to compare well in standard with what we had just seen in Orkney, we’d concentrate on the 19th century remains. Unfortunately, the tourist board leaflet we had was prepared in 2003 and I’m not sure there had been much maintenance since, as some of the sites were hopelessly overgrown. However, we enjoyed it all the same.

There was a grand view to start with at Braetongue:

The first of the day’s clearance villages was Grummore. This settlement was emptied of its people in the early 19th century to clear ground for sheep farming. Some inhabitants were resettled on the coast and expected to take up sea fishing, even though they had no experience of this. Others moved away to Glasgow or further afield to England, America, Canada, Australia and New Zealand. Maybe some were your ancestors?

Clearances happened all over the Highlands, but the Strathnaver ones have been particularly well documented through the writings of Donald Macleod who witnessed them. His monument is another sight on the tour. 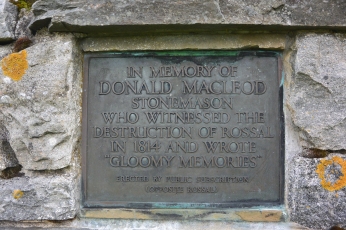 The other clearance villages we visited were Rosal and Achanlochy. The first could allegedly be reached via a forest trail which had so many fallen trees that we had to turn back, though we did get there eventually via the forestry road. The second had so much bracken that you couldn’t see the ruins, but the setting was beautiful; not that this would be much compensation for the hardship of a crofting life and the sheer injustice of being evicted for sheep. The mass exodus of people has disturbing parallels in our own time. How much have we progressed?

Other sights included the rather sweet corrugated iron church at Syre…. 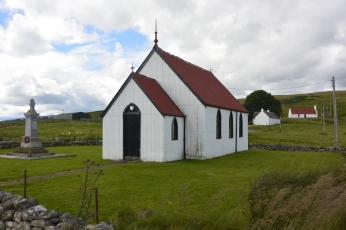 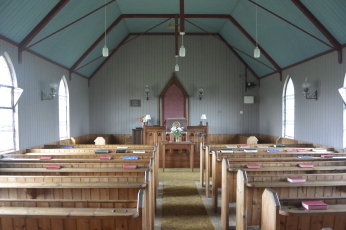 ….and Bettyhill with its splendid war memorial and the Farr Stone, an 8th century Christianised Pictish stone.

As you can see, by the end of the trail at Bettyhill the sky was a brilliant blue again and we had high hopes for good weather the next day as we ventured west of Tongue.