(This is Part Three of a seven-part tale. If you want to catch up, Part One is the Introduction and Part Two is about Lhasa.)

Soon, the day for our overland trip arrived. The day before, we had each been asked to pay an extra $87 to hire two Toyota Landcruisers because, according to W our guide, the roads were “very bad, very bad” and the bus wouldn’t make it. Well, we weren’t surprised about the bus and we’d seen some pretty smart-looking Landcruisers about town, so this seemed ok. And if the roads were bad – well, we hadn’t expected a holiday camp either. However, the Landcruisers were old, beaten-up and rattled more than the bus. Still, things weren’t too bad for the first 90 minutes, until we left the main road and swung off up a mountain pass on a winding, un-metalled track. We all began to wonder what we had let ourselves in for. This was supposed to be a 10-12 hour drive and already we felt we’d never survive. The scenery was spectacular, but we felt too awful to appreciate it. 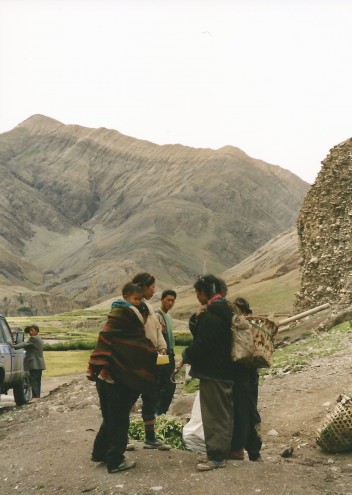 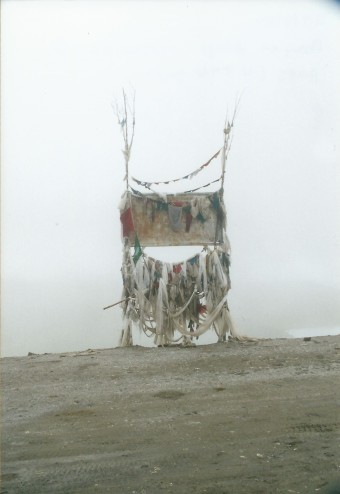 After four hours, we reached a “restaurant” (hut in the middle of nowhere) where we had lunch. This was our big chance to try yak butter tea, the local speciality. John, who is notorious for trying anything revolting, quite liked it – it reminded him of Stilton soup. I smelled it and heaved, asking for jasmine instead. I’m sure this came in the same bowl, which hadn’t been rinsed out, but at least it was drinkable. After lunch, the ladies tentatively asked about the facilities. W advised us that there was a toilet, but that we’d be better going behind a wall outside. Hmm…. 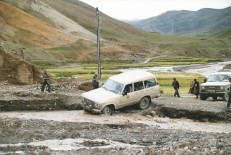 A word about Tibetan toilets. The hotels we stayed in had normal Western sanitation, but outside a toilet (usually announced by its smell) consisted of a communal room with two planks over a noxious pit. No running water, no privacy. When sightseeing, we had all managed to avoid this because we always went back to the hotel at lunchtime. (Except for John of course, who with his usual disgusting curiosity went into each one just to look, even if he didn’t need to go.) On the road, it was different. The men, as usual, had no bother. The women developed a system of standing guard for each other (no bushes or big rocks available), and certainly our modesty decreased as the week wore on. The first time was a bit of a disaster – C got through alright, but what we hadn’t reckoned with was that, although we were well hidden from our own Landcruisers, we were on a hair-pin bend and there was a convoy of Germans on the way up. I heard their vehicles in mid-flow but had been holding on so long I couldn’t get done in time. We kept meeting those Germans all week. I hope they didn’t recognise me.

Enough about toilets, and back on the road. The first day turned out to be only nine hours. Perhaps, we thought, W was the type to exaggerate how bad things would be so that we felt good when they were better. We arrived at the Gyantse Hotel for one night – it looked like a toilet block from the outside, but was quite smart and comfortable inside. Our brochure described the next day as a pleasant two-hour drive to Shigatse with a visit to a monastery in the afternoon – and if W was saying the roads were now “very, very bad”, well, we knew he exaggerated didn’t we?

Come back on Monday to find out what happened next….