(This is the second instalment of this tale. Part One is Tibet 2000: introduction).

We arrived in Tibet full of optimism. There were six of us: myself and John, C, a young Italian/American woman and the F family from Austria: mother, father and 17-year old son. The programme was that we flew up to Lhasa (at an altitude of 3650 m, about 12,000 ft), spent a couple of days sightseeing and then returned overland to the border with Nepal. This would be a 5-day drive, with the possibility of a 5-mile walk at the very end where the road into Nepal was often impassable. It would be downhill and there would be porters to carry our bags so it didn’t sound too bad. The best laid plans…..

Gallery 2: Barkhor Square and the Jokhang 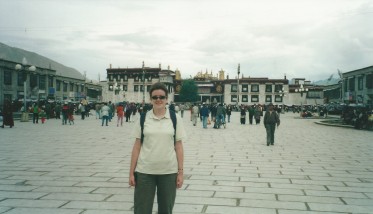 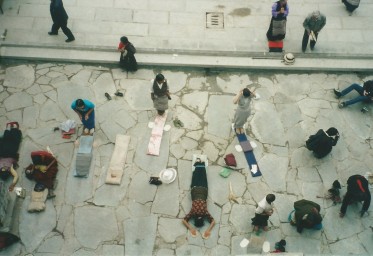 Prostrating pilgrims at the Jokhang

Dalai Lama’s quarters at the Jokhang

We were met at the airport by W, our Chinese guide, and driven into Lhasa (one and a half hours away) in a very rickety bus which we were dismayed to learn was our transport for the week – we were expecting the roads in Tibet to be a bit rough and it didn’t seem up to it. Still, the Hotel Lhasa was very plush and we were to have three nights there, so things didn’t look too bad especially as our first evening was a success. C, John and I went out to find a restaurant and, as we had followed our guide’s directions wrongly, we missed the tourist ones and ended up on a street where all the restaurants were aimed at Chinese locals. However, we found one that had its name in English as well as Chinese and we took the fact that it was busy as a good sign. When we went in, we caused total consternation amongst both staff and customers. Such an invasion of foreigners had obviously never happened before. Eventually, a diner with some rudimentary English was found, we were ushered into a separate room and he helped us to order some food. It was excellent, and cost less than a fiver for all three of us. As we ate, we congratulated ourselves on how well we were feeling – slightly headachey perhaps, but no real symptoms of altitude sickness. Little did we know. 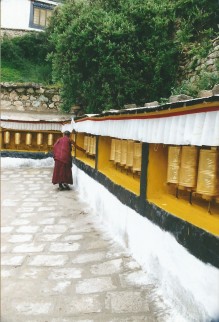 The year before, John and I visited Quito* (9,000 ft) and felt a little dizzy the first night, but otherwise were fine. The extra 3,000 ft made a huge difference. At two o’clock that morning, we both woke up with the most incredible headaches. I have never felt anything like it. John said it resembled a very bad hangover, but either he has experienced hangovers of a spectacular quality I have never attained, or he was not suffering anything like as much as I was. I thought my head would explode. I thought it would fall off. When I got up the next morning, I could only move in slow motion. All week, this headache stayed with me, usually at a fairly low level, but it could be aggravated by various things such as the sun or the motion of the vehicle and it was always more painful at night so I slept quite badly. To make matters worse, another symptom of altitude sickness is loss of appetite and I suffered from this too. Most people will find that hard to believe of me, but it’s true. Typically, I acclimatised on the day before we left Tibet when I began to feel quite human again. 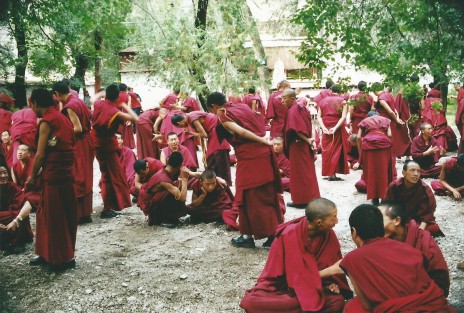 We were joined for our two days’ sightseeing by V, a large Russian, who entertained us all at top volume to his views on the Russian military and the shortcomings of Tibetan food (it wasn’t Western enough) in perfect, if pedantic, English. We could tell W didn’t like him, especially when he called him Comrade. We were supposed to meet up again a couple of days down the road, but this never happened. Our last, incongruous, sight of him was when he was despatched in a tiny rickshaw back to his hotel on the second day. We did ask about him later in the week, but apparently he had disappeared and we never heard what happened to him. We saw the Potala Palace, former home of the Dalai Lama, and three monasteries. All contained gloomy rooms, glorious golden Buddhas and many red-robed monks. However, my strongest memory is of the smell of yak butter candles which permeated everywhere and didn’t help with my queasiness.

Find out what happens when we set out on the road in Thursday’s instalment.