May 31, 2017 29 Comments
In the UK, May is bookended by Bank Holiday Weekends and we took full advantage of both. May 1st saw us on a ferry returning from Arran after spending time there with friends, and at the end of the month we had a couple of nights in Oban. Full posts to follow! So what else has been happening?

My cousin Tracy and her husband have just bought a new boat. We were able to inspect it before a family lunch at Kip Marina. Doesn’t she look delighted? 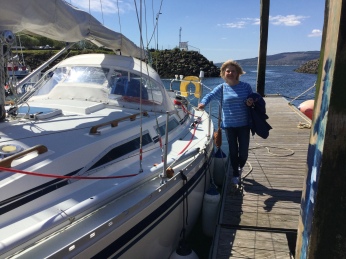 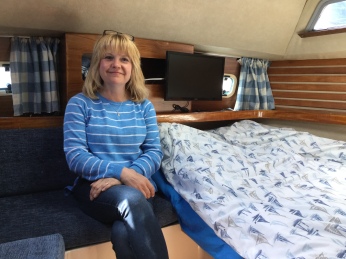 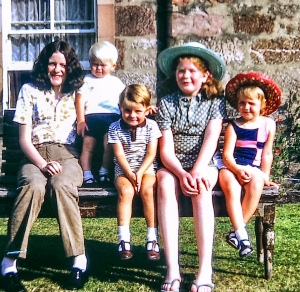 We also had dinner with another of my cousins, Ian, and his wife Lynn. No photos were taken at that event, but here we are as kids on the back green of our grandparents’ tenement flat. That’s their kitchen window behind us. I think this is 1971, so I would be 14 and Ian 4. His wee brother and my younger sister are also there, and a small girl at the end who, I think, must have lived in the same building. I have no recollection of her at all.

Voice from the past

While I’m on a nostalgia theme, how about this? As some of you know, I administer a blog, It was always sunny, for my Mum who is writing the story of her life. When she came to the section about me starting school I included the picture above and was surprised recently to receive a comment from one of the other children, the boy fourth from the left in the front row. He’d Googled the name of the school and up this popped! We’ve been exchanging memories and trying to complete a list of all the names. Can’t find me? I’m fourth from the right in the back row.

Talking of things popping up, and in the blowing-my-own-trumpet department, I was touched and delighted to find my name in Update, the professional journal for librarians in the UK (third paragraph). One of the most satisfying aspects of my career was mentoring and encouraging younger librarians so it’s great to know it was appreciated. Thank you so much to Jennifer for mentioning me. 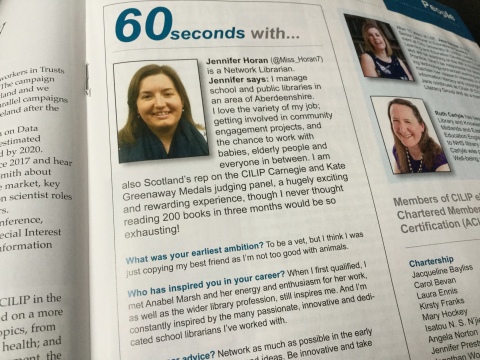 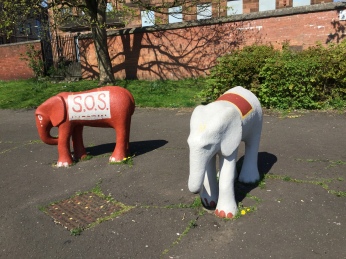 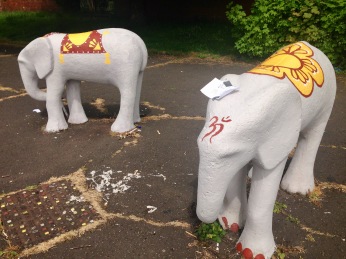 Glasgow has many fine parks, and I’ve written about the major ones, such as the Botanic Gardens, many times. All over the city, however, you can find pocket-sized parks amidst the urban sprawl. Last year, these two concrete elephants near my home were sending out an SOS signal because redevelopment of an adjacent building put them under threat. When I passed by the other day they had obviously just been made-over (one still has its Wet Paint sign) so I’m hoping this means they have been reprieved.

Four theatre / concert hall visits, three guided walks, a visit from my sister – I’m running out of time to write about everything this month, so I’ll quickly finish by returning to my programme of expanding your vocabulary with Scottish words! The Women’s Library guided walks that I’ve co-led have not been blessed with good weather – an understatement to say the least. Both guides and partcipants were drookit. If you can’t guess what that means from the pictures, click on the link! I have more walks coming up in June, so I’m hoping for better luck. 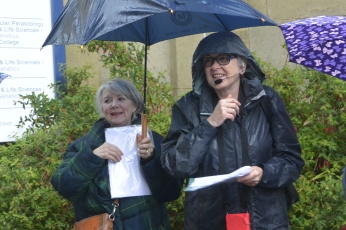 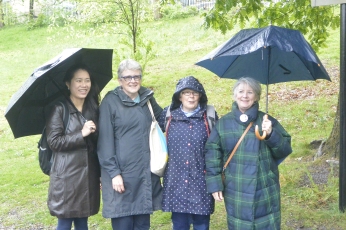 So that was my May – how was yours?