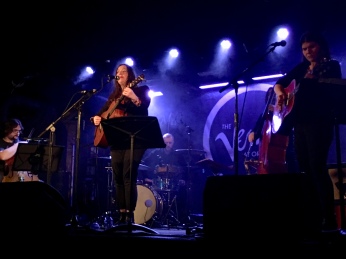 Glasgow’s traditional music festival, Celtic Connections, runs from late January into February. As usual, we booked several gigs – Friday 1st February saw us at Òran Mór to see Kathryn Williams, a singer from the North of England. I first came across her many years ago in a documentary about Leonard Cohen in which she covered Hallelujah, and I’ve been a fan ever since. She didn’t sing that, but she closed with Bird on the Wire which brought a tear to my eye and sent me home happy (if that’s not contradictory).

Equally enjoyable was the support – not often I say that! The Brother Brothers, from Brooklyn via Illinois, had such delightful folk / bluegrass harmonies that I bought their CD on the spot. Charming young men too – real brothers, twins in fact, whose surname is Moss. I didn’t bother asking why they hadn’t called themselves Moss Bros, they’ve probably heard it before (might be a British only joke though).

What about the women?

I mentioned last month that I had two women’s history talks coming up in February – I’m pleased to report that they both went really well. The first one took place the day after the centenary of the Representation of the People Act, 1918, through which the first women in Britain got the vote, hence I’m proudly wearing my Suffragette rosette. Jessie Stephen, on the screen, is one of the women I feature – she’s one of the few working-class Scottish Suffragettes whose history we know. I recently nominated her for a scheme called Suffrage Pioneers and was delighted that she was accepted – now I just have to think of ways to celebrate her all year! As a start, I’ve guest-posted on The History Girls Frae Scotland where you can read more about Jessie if interested.

Some of the banners on the table read The world is ours, let us go in and possess it and What a debt we owe these women. Very true!

Oo-err – strange goings on in the park! It’s part of an evening light show, Mystical Gardens, which we didn’t go to. These figures are scary enough for me …

A few days later (yesterday) the figures had gone and the slope they stood on was a winter wonderland.

And today, these are the views from my window.

Who do you think designed these silk squares? The first one is by Henry Moore, whom I usually associate with large sculptures, and the other is by Salvador Dali. They are from a wonderful exhibition we attended called Artist Textiles, so good that I think I’ll give it its own post later. I had no idea that at one time you could buy Picasso, for example, by the yard. Not only were the fabrics on display, but also dresses made from some of them. I loved it!

It’s been a busy month, but not a very exciting one in terms of things to write about. As well as my talks, I’ve been up to my oxters in revisions and rewrites before the guided walk season begins.

What is an oxter, I hear you ask? It’s my Scottish word of the month, of course! It means armpit. It’s also possible to be oxtered up the road by your pals, maybe when a little the worse for wear. That has never happened to me, I can assure you, but it does make me think that some day I should run through all the Scottish words I can think of for drunk. That would certainly add colour to your vocabulary!

I hope you’ve all had a good February too. Onwards to Spring at last!