On our first full day in Harris we followed the main road to its end at Rodel (Roghadal) and St Clement’s Church. Built in 1520, the church saw only 40 years of service before the Protestant Reformation, after which it fell into ruin. Rescued 250 years later by Captain Alexander Macleod, who then owned Harris, it is now maintained by Historic Scotland.

The Macleod tombs inside are richly carved, especially that of Alasdair “Crotach” (“humpback”) Macleod who had the church built. The carvings behind his tomb are intricate and include a birlinn (highland galley) setting sail and an angel casting incense to the winds.

Outside, there are interesting carvings too, including bulls’ heads, a man wearing a precursor of the kilt and a squatting female figure which looks more pagan than religious, perhaps a “sheela na gig”. Readers of a sensitive disposition need not follow the link! 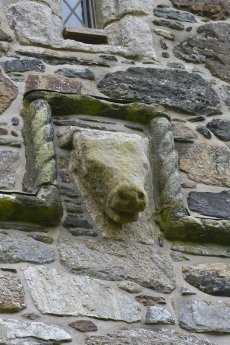 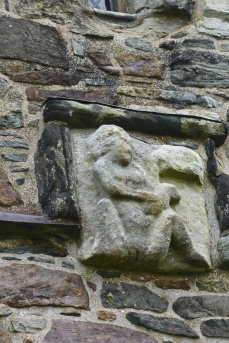 This was the first of many graveyards we spent time in. Some of the stories told on the stones are heart-breaking. Here lies John (Iain) Morison, a noted hymn-writer. Later in the day, we visited Seallam! Visitor Centre, another excellent small museum with a large section on emigration (both voluntary and enforced). One of the panels tells the story of what happened to his widow and children after his death in 1852. 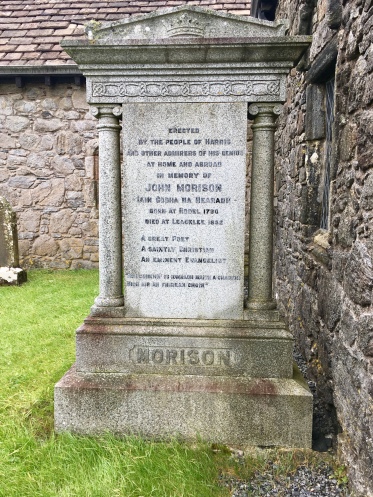 Or what about the MacDonald family with one son drowned at 11 and two of his siblings lost in young adulthood? Or Angus MacLean, pre-deceased by two wives and two children? Life was hard. 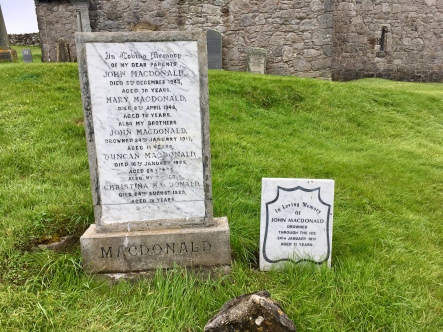 What next? A walk out to Renish Point. Here I am climbing away from the church. Perhaps you can detect a tiny bit of reluctance in my body language already? It looks clear enough here, but it was starting to rain.

From the top of the first hill, we could see our destination. Renish Point is the longer of the two headlands below.

The natives seemed friendly. Just as well, I don’t like the look of those horns. 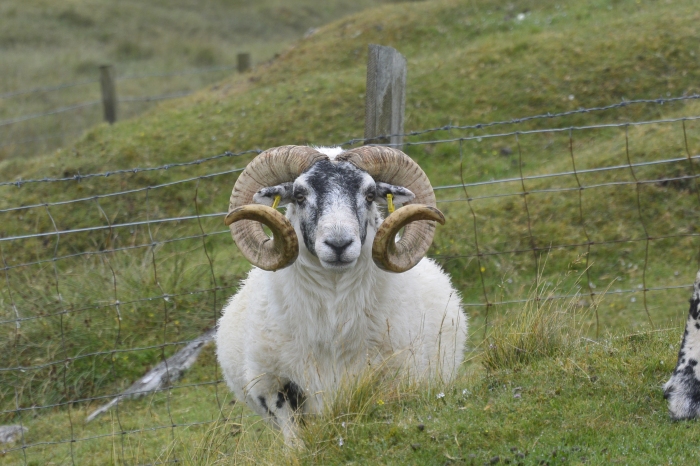 For trudging over the boggy, tussocky headland, we were rewarded with extensive views as you can see. Or not.

Here I take my hat off to fellow blogger Andrew of An Oldie Outdoors who preceded us to the Outer Hebrides, but in the opposite direction and on foot. The weather was not always kind to him and he made the ironic phrase “extensive views” his own. Many of the walks we did were on the Hebridean Way and tended to be as boggy as this one. I could not do this day after day carrying my belongings and knowing I had to rely on my feet to get me to my bed for the night. I use the word “bed” in a fairly loose way. I don’t count beds in tents as beds.

As for us, we got ourselves back to Rodel as quickly as possible, stopping to admire its small harbour before we left. Our guidebook refers to the “former” Rodel Hotel here, but we were pleased to see it was being restored – another indication of the upsurge of tourism and increase in prosperity on the islands. 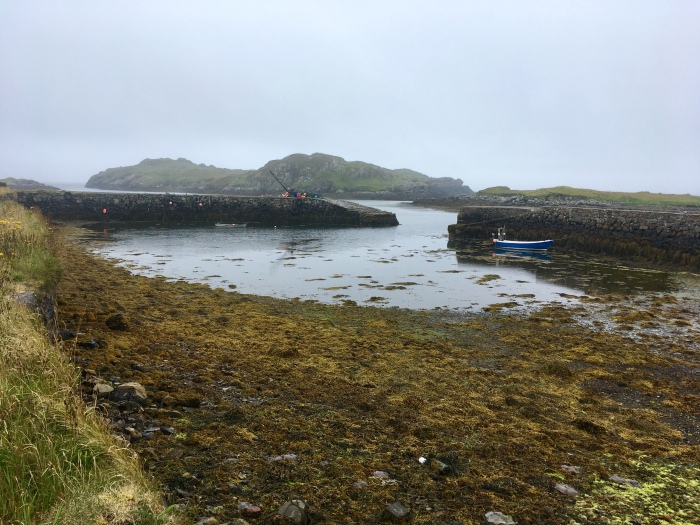 Returning to the car, we made that stop at Seallam! mentioned earlier. (Seallam means welcome in Gaelic, and it certainly was.)

Then it was back to Scarista House to dry out, eat a delicious dinner and sleep in those comfy, comfy beds again. No, roughing it is definitely not for me!