The west coast of South Uist is just one long beach. Our first walk of the day took in a bit of it, as well as the machair behind. Although it looks like no more than a wildflower meadow, the machair is cultivated and every so often you come across a patch of grain grown for cattle feed, or potatoes as below.

We also took in Cladh Hallan, the remains of three Bronze Age roundhouses. Not much is visible, other than depressions in the ground, but the history is fascinating. Excavations from 1988 to 2002 showed that the middle house had been occupied for 900 years, making it one of the longest continuously inhabited prehistoric houses in the world. Several skeletons were discovered, one – a female – dating back to 1300BC, i.e. around the time of Tutankhamun. Two of the bodies had been preserved in peat bogs for many centuries before being buried and had been mummified, making Cladh Hallan the only site in Britain where prehistoric mummies have been found. Not bad for a little patch of grass!

We next stopped off at Flora MacDonald’s birthplace, she who helped Bonnie Prince Charlie escape after Culloden, although archaeologists these days think this may not be exactly the right place.

Our main destination for the day was Kildonan Museum. Although it now holds over 10,000 items related to the social, domestic and cultural history of South Uist, its origins lie in 700 items collected by Father John Morrison in the 1950s and 1960s which he displayed in a small thatched cottage. (This is the same priest who became known as Father Rocket for his opposition to military developments on the island and who commissioned Our Lady of the Isles, as mentioned a couple of posts ago). We remember visiting a little heritage centre on our last visit in the 1980s, and this must have been it.

When he left for a mainland parish, Father Morrison signed over his collection to be held on behalf of the people of South Uist. Until 1997, when the modern museum was built, it  was displayed in an old school-house (the tin-roofed building in the gallery below). 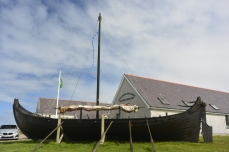 We were really impressed with the museum, not least because it had a café where we had a good lunch. We learned new things about the impact of the Clearances for example. I knew people were cleared off the land because the owners wanted to graze sheep, but I was shocked to learn about Catholics being cleared to make room for Protestants. In 1854, Howmore Church, which we would visit a few days later, was built. The Catholic tenants were evicted by the factor and the minister brought in Protestants from Skye to form a congregation. Horrifying!

We found out more about Father Allan MacDonald whose grave we had visited in Eriskay the day before. 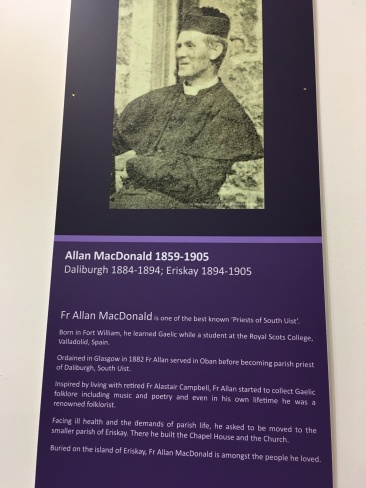 And also about the bard Donald Allan MacDonald whose memorial we passed every day on our way to and from Lochboisdale. 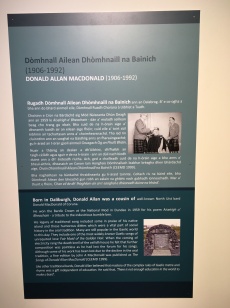 One thing the museum wasn’t very good at was having believable mannequins. I collected a few images which I hope will amuse Jessica at Diverting Journeys who has a bit of a thing about them. The guy in red, a ferry captain, is particularly disturbing! 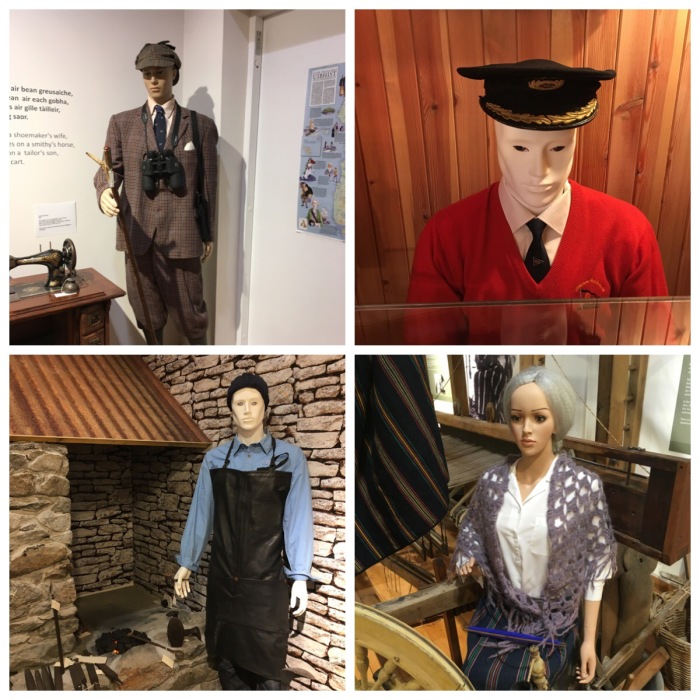 After the museum, we headed onto the east coast and Loch Eynort. One local man, Archie MacDonald, has planted over 100,000 trees here and provided 5 km of pathways through his croft, even lugging benches up the hill. We salute him! 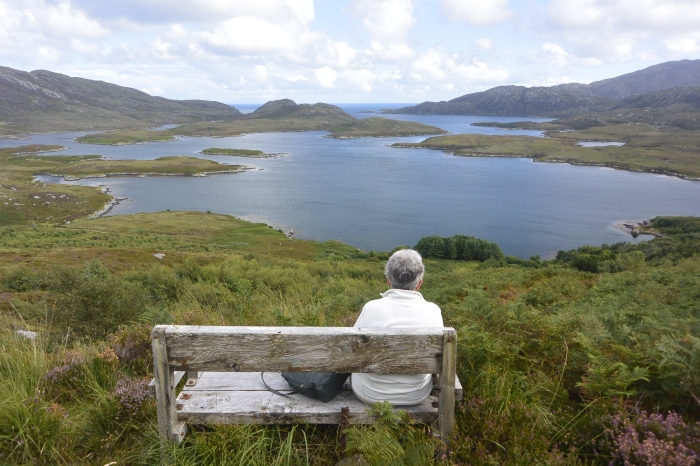 As we followed the loch-shore path, it began to rain and we could see a glow ahead of us. 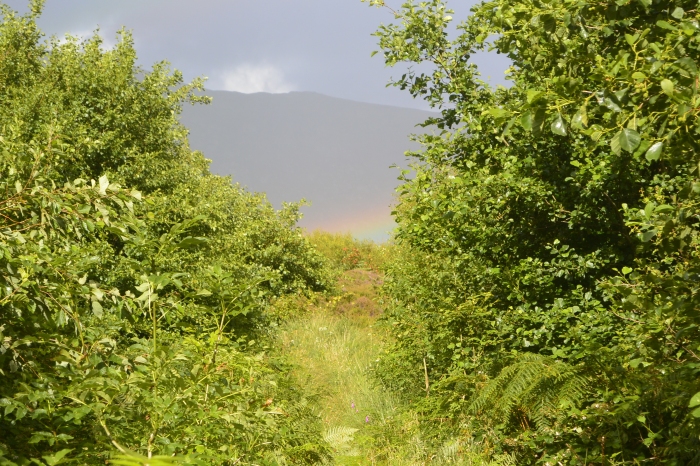 This led to one of the most beautiful rainbows I can remember seeing, with a ghost of a double too. Breath-taking.

Our itinerary today was not unique to us. We had one of those days, which I’ve mentioned before, where we met the same people all the time, in this case a Slovenian couple. They were at Flora MacDonald’s birthplace and the museum, and as we arrived at the Loch Eynort car park they gave us a cheery wave as they drove off. It reminded us of our 1989 visit to South Uist when we seemed to follow a Belgian car everywhere, a red Volvo from which four small faces peered out of the back window. Did this inspire a love of the Hebrides? Every time we saw a Belgian car on this trip I wondered if the driver was one of those children grown up!

The next day, we set off to explore North Uist, our longest day by far.