Dundee: the V&A and the McManus

London’s V&A (Victoria and Albert Museum) claims to be the world-leading museum of art and design, so there has been great excitement waiting for its Scottish branch to be completed. V&A Dundee opened in September 2018 and the main purpose of our weekend trip in November was to check it out. The ship next to it in the image above is RRS (Royal Research Ship) Discovery, the last traditional three-masted ship to be built in Britain (in 1901). We visited the following day, so more on that in my next post.

I always assumed the exterior of the V&A was meant to represent a ship, to complement Discovery, but I read it was intended to look like sea-cliffs. I can see both things in it. Architect Kengo Kuma has also said he wanted to create a “living room for the city” for everyone to visit and enjoy and I think he has succeeded in that too.

V and A Dundee 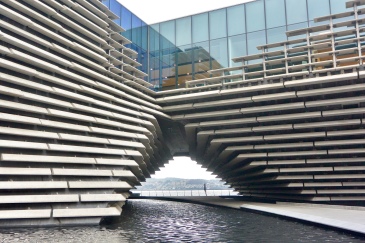 V and A Dundee

V and A Dundee, interior

There are two main parts to the museum: a gallery for temporary (paid) exhibitions and the permanent collection. While we were there, the exhibition was Ocean liners: speed and style (now ended). I thought this was very well done: spacious and with a clear path through it so that, although busy, you weren’t falling over other people. The large hall with models dressed elegantly for bathing and dining was superb. 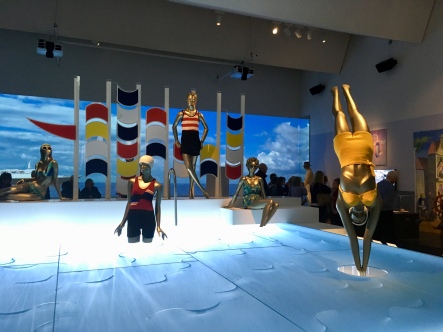 This panel from the Titanic also caught my eye (click to enlarge explanation). 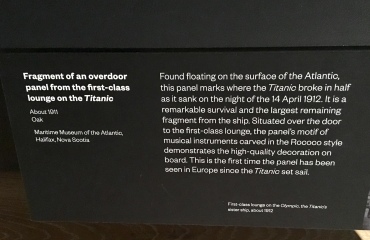 On emerging from Ocean liners we decided to have lunch, but both the café and the restaurant were packed full so we ploughed on to the permanent exhibition, the Scottish Design Galleries. I admit to recoiling in horror when we opened the door. After Ocean liners the space seemed small and cramped with no obvious route through it and people everywhere. There were two things we really wanted to see: Charles Rennie Mackintosh’s Oak Room, a tea room interior created in 1908 which has been in storage since the 1970s, and the set for The Cheviot, the stag and the black, black oil (1973). This was a play by 7:84, a theatre company which took its name from the fact that 7% of the world’s population owned 84% of its wealth. Playwright John McGrath wrote of the exploitation of the Highlands between 1746 and 1973 which artist John Byrne illustrated in the form of a giant picture book which could be carried from venue to venue strapped to the roof of a van. The cast turned the pages as necessary – in the museum in November it was open at a war memorial scene (more info here). 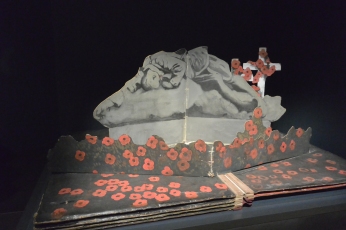 We need to go back to give the permanent gallery more attention when it has been open longer and is (maybe) quieter. In the meantime, to recover from cultural overload, we went into the city centre for a quick lunch – and then went to another museum! The McManus is Dundee’s civic art gallery and museum, and it was much quieter – I hope it’s not going to suffer too much from the competition of the V&A. The building is Victorian Gothic and quite spectacular (photos taken the following evening as we don’t seem to have any day time ones). 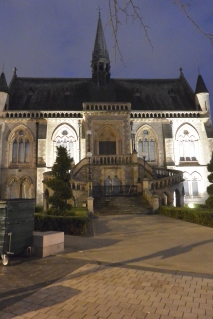 Nor do we have many interior photos, and the ones we have I can’t remember what they are! One picture below might give me some ideas for my Scottish words feature. The coloured glass bottles in the other were an installation running from top to bottom of the building’s stairwell.

We truly were punch drunk with culture by this time, so we returned to the hotel for a reviving cuppa before heading out again for dinner. The following day we had plans for two more museums. Would we last the pace?