Kelham Island Museum opened in 1982, by which time we no longer lived in Sheffield. However, we didn’t move far from the area until 1986 so we visited a few times and were keen to go back. The museum stands on one of the oldest industrial sites in the city, an island which was formed in the 1180s when a mill-race was created to carry water from the River Don to the Town Corn Mill. It now tells Sheffield’s industrial story from light trades and skilled workmanship to mass production, the Industrial Revolution and the growth of “Steel City” through the Victorian Era and two world wars.

Near the entrance I spotted two things which interested me straight away. Scotland is not the only place with unicorns – the one below was made at Kelham in the late 1800s. The other thing was the tribute to Enid Hattersley. When I was studying librarianship, our class was taken to observe a meeting of the council’s Library Committee chaired by Mrs Hattersley who was later instrumental in setting up the museum. My memory is that she was a very formidable woman. Her son Roy (now Lord) Hattersley was a prominent Labour politician from the 1960s to the 1990s. I met him years later at a book signing and he was pleased to hear that I remembered his mother, though I didn’t mention the word formidable! I still have the book – unread, I’m sad to say.

Enid Hattersley Gallery
As an aside, in 1980 I wrote my dissertation on library services to the visually handicapped and was granted an interview with the Leader of the Council, one David Blunkett, who had been blind since birth and had useful views on the matter. He also became prominent in a Labour Government, rising as far as Home Secretary (2001-2004), and is also now a Lord. Yup, nothing says socialist like an ermine robe.

The section on steel had some interesting tableaux, and I was pleased to see that women’s role in the industry was represented as well as the actual steelmaking.. The young woman below is a buffer girl, responsible for using polishing machinery to buff cutlery and other metal goods to give them a smooth surface. It was a hot and dirty job that required protective clothing. 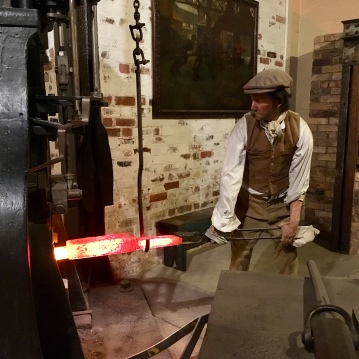 Steelmaker
The museum’s biggest (and loudest) exhibit is the River Don Engine which is run once or twice a day. Built in 1905, it weighs 400 tons and runs on 12,000 horsepower. It was in use till 1978 and is the biggest, most powerful steam engine in Britain today.

River Don Engine
Outside, I liked the Stone Garden, particularly the hanging sheep which was the trademark for Sorby’s sheep shears in the 19th century. The stone carving came from the factory’s gate and could date as far back as 1820. 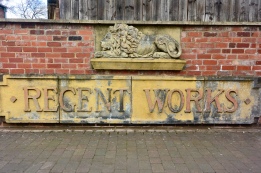 Stone Garden
The Millowners Arms, sadly, was not a real pub but told the story of Ward’s brewery. I enjoyed reading about the 1830 Beerhouse Act which made beer cheaper and more accessible. It was meant to protect people from the perils of drinking gin, but somehow drunkenness still became a problem. Who could have foreseen that? 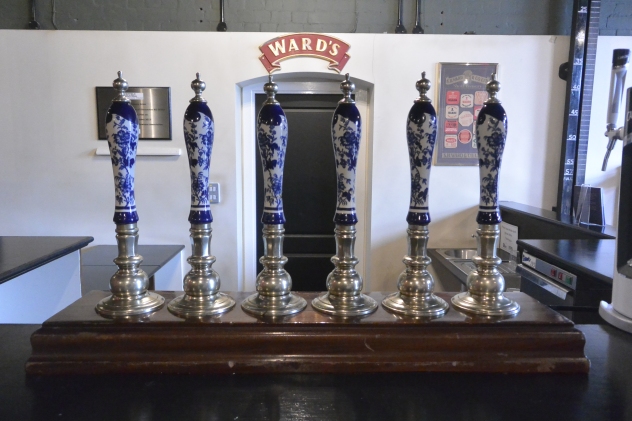 Millowners Arms
Fear not, we did manage to visit a real pub. When we lived in Sheffield, a trip to Kelham Island always involved the Fat Cat too. It isn’t the only choice now, as the area roundabout has been considerably gentrified since our day with a selection of smart bars and cafés, but loyalty won out. Fortunately, it was as good as we remembered and we enjoyed a lovely Sunday lunch there. 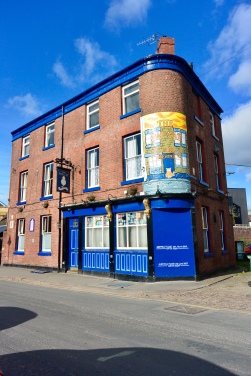 Fat Cat
Some nice street art too, I always like to see that. 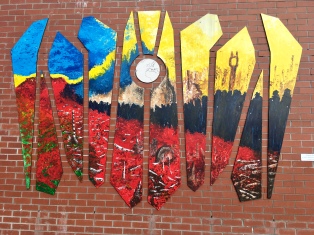 Broken World (John Wilkinson 2018)
And finally, something that doesn’t look much different: these flats at Moorfields just before you get to Kelham Island. John lived here for a few months after I left Sheffield to work in Nottinghamshire. Soon, he followed me and that was the end of our residence in Sheffield, though we still considered it “our” city.

It was the end of our trip too – the next day was Monday and we took the train back home to Glasgow. I’m already planning to go back: there are more memories to pursue!