Many of you liked the photos I posted of the two Window Wanderlands we attended in February, so I thought I’d start with more of the same – Window Wanderland Part 3! As with the other events, Maryhill’s took place on a wet, cold night, but the colourful displays cheered us up. I think cheering up is what we all need at the moment, with so much closed down because of the coronavirus, COVID-19, so I’m going to show you lots and lots of windows and gardens in this post.

The top image has a musical theme with The Beatle’s Yellow Submarine on one side and Pink Floyd’s The Wall on the other. The Beatles cropped up again with Norwegian Wood, which included the song itself playing, one of two windows we found with sound effects. Round the corner, this seascape was accompanied by the sound of rushing waves. 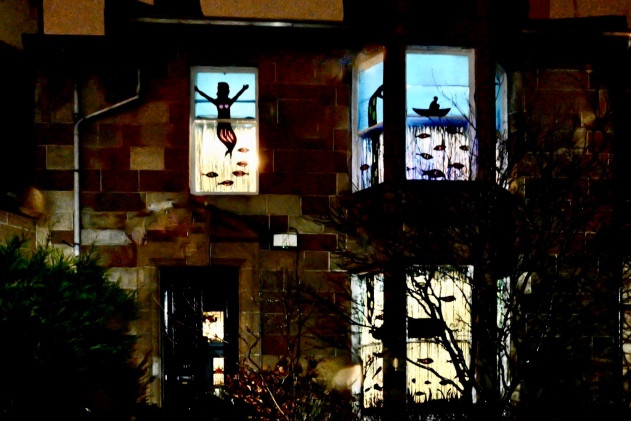 The Wanderland took place on the eve of International Women’s Day (8th March) so we appreciated that one household had chosen to celebrate this. The nearby Be Kind message is also very relevant today.

Here’s a great big gallery for your delectation! 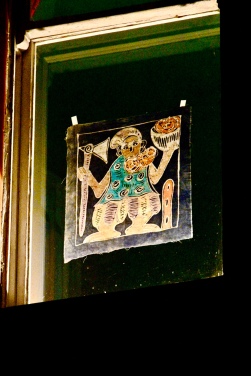 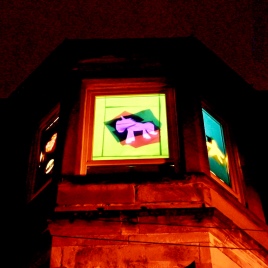 Finally, one householder had set up a cinema in his back garden, complete with popcorn and – because the film was Whisky Galore – a wee dram. 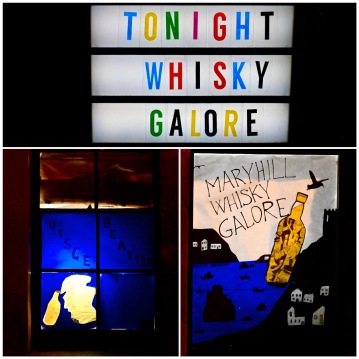 The last weekend before everything started to shut down was amazingly dry, and we got a couple of outings. A circular route took us up the forested Stank Glen, above Loch Lubnaig, and in the shadow of Ben Ledi. Dry it might have been but, after all the rain we have had, some of the paths were like small streams, and crossing the actual streams was tricky because any stepping stones, natural or otherwise, were submerged. Cue wet feet! 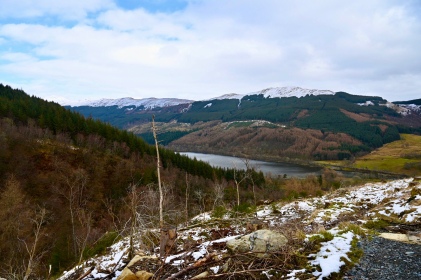 That same weekend, we visited a couple of the gardens advertising snowdrops through Scotland’s Gardens Scheme. It was right at the end of the snowdrop season, and not much else was out, but it got us into the fresh air again at a troubling time.

Kilbryde Castle has been home to the Campbell family since 1659. The current owners, Sir James and Lady (Carola) Campbell were out gardening when we arrived and greeted us from a safe distance. We had a rather slithery, muddy walk round the property. 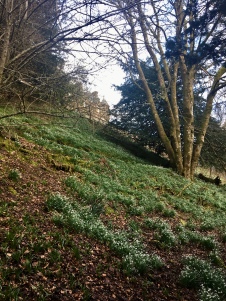 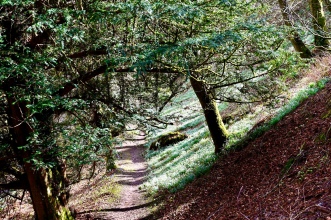 We dropped into nearby Dunblane for lunch. The restaurant we chose, Allanview, had just opened the week before. What an unfortunate time to start a new venture: I feel so sorry for the owners. The food was excellent, but now they will have had to close like every restaurant in the country.

Things we noticed in Dunblane: I’ve posted Andy Murray’s gold post-box before (all home-grown 2012 Olympic gold medallists got one in their home town), but not since it had a plaque celebrating his special stamps, and I don’t remember his Wimbledon bench either.

We loved this quirky signpost. 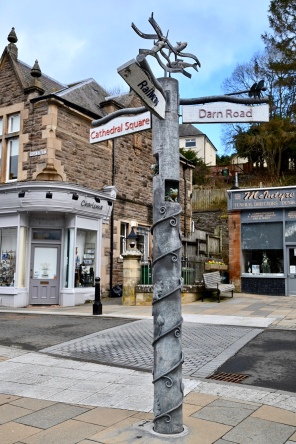 And we also loved the mosaics decorating the bridge over the Allan Water. 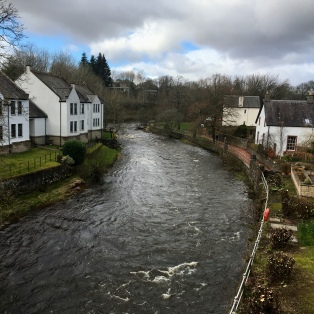 Mosaic on bridge over Allan Water

Finally, on our way back to the car we spotted a ghost sign. This house is called The Old Bakery, and the ghost sign tells us why – Tea Room. 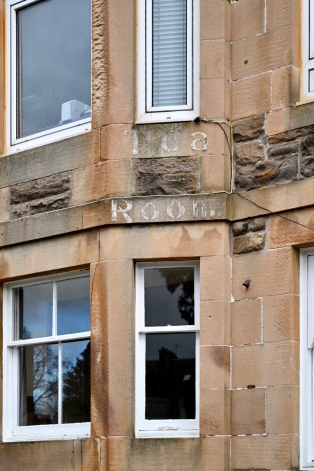 From Dunblane, we drove to our second garden of the day, Braco Castle. The oldest part of this house dates from before 1600, a rectangular tower built by the 3rd Earl of Montrose for his son, William Graham. It has been owned and adapted by several families since – judging by the surname, the current owners might be Dutch.

The gardens were more elaborate here than at Kilbryde – still not much out, but there was more colour than just snowdrops.

View to the hills

I gave my talk, Jessie Stephen: Scottish Suffragette, to the Drymen Lunch Club – the last talk for some time, and the first one to actually have my name on a ticket! I quite liked that. I also saw my talk in print for the first time in Gallus, the journal of the Glasgow and West of Scotland Family History Society, who hosted me back in September. They have made a clever acronym out of Gallus – Glasgow Ancestry Links the Life of Us. I’ve explained gallus before: in fact five years ago I did a whole A to Z Challenge on Gallus Glasgow – here’s the explanation if you don’t know what it means.

The week before Glasgow Women’s Library closed down (though we didn’t know that at the time) we had a tea party to say goodbye to one of my fellow volunteers, Eleanor, who is moving to Berkshire to live nearer her son. We’ll miss her – that’s Eleanor in the middle with me and Anna. The three of us comprised the Thursday morning cataloguing team.

As you might expect, all of these events took place in the first part of March before life changed utterly. I don’t expect anything worth writing about to happen between now and the end of the month so I’m clearing the decks and publishing early. We can still walk outside, and we’re lucky to live near a river and a canal – however, the banks are quite narrow and it’s hard to keep the recommended 2m distance from passers by. At least the weather is now dry. To illustrate the difference, here are two pictures taken across the Kelvin in February and March. In the first, the little seating area is completely flooded. In the second, the river has retreated to its natural level.

COVID-19 is already spawning its own art. Street artist Rebel Bear, who has featured here several times before, has contributed this mural on Bank Street.

And Twitter, which can be an absolute cesspit sometimes, has the lovely hashtag #COVIDCeilidh in which traditional musicians post videos of themselves performing to create an online ceilidh (a social event with Scottish or Irish folk music and singing, traditional dancing, and storytelling). You don’t have to be on Twitter to see it, just clink my link above. Here’s one of my favourites so far, Anna Massie of Blazin’ Fiddles, a band we’ve seen a few times, accompanied by her mum on the spoons. Watch for the head movements at the end!

As it’s Mother’s Day, and I’m lucky enough to be hanging out with my mum today, we thought we’d contribute a bonny old Swedish tune to the Sunday Smorgasbord. #COVIDCeilidh pic.twitter.com/KAuoP3hhnY

Will there be another Gallivanting post when I can’t gallivant? At the moment I haven’t a scooby*, but at least I have plenty of backlog to keep up with, and I’m thinking of joining Becky’s latest Squares challenge in April, SquareTops, hopefully with a travel theme. Virtual travel is the best we can do at the moment.

*I’ve already had two Scottish words in this post, but Scooby is my actual Scottish word of the month – I didn’t realise it was Scottish, but it’s in my book 100 favourite Scots words so it must be! It means I haven’t a clue and is rhyming slang for the cartoon character, Scooby Doo. First found in print in the Glasgow Herald in 1993 apparently!

Stay safe everyone. As we practice social distancing, or self-isolate, our online buddies are even more important. Till the next time.