Looking up and around us more gave us a new perspective on Glasgow during lockdown. One of the things that started to catch my eye was a good sign, and pubs provided several examples. Above is The Aragon on Byres Road – given that this pub was established in a former butcher’s shop in the 1970s, I’m not sure of the significance of the monk but he looks good. A few more pubs below, some from towns just outside Glasgow when we started to roam a bit further. 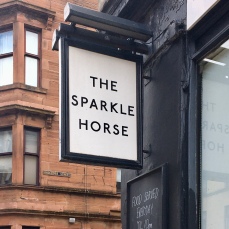 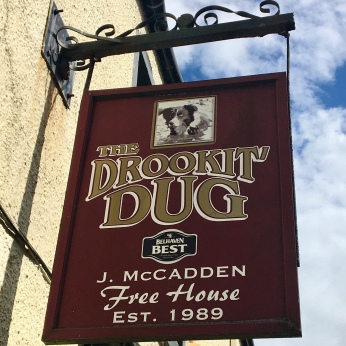 Why does a house in North Kelvinside have a French road sign in front of it? You could hardly smuggle it back in your suitcase …

I like the juxtaposition of these two black metal signs for the Engine Works in Maryhill and Partick Housing Association. The former was literally an engine works not that long ago – Clark and Buchanan – but has recently been renovated as an events venue. The couple who bought it sank a lot of their own money into it, so I hope their business survives the current problems.

Nae fancy nonsense at GWR restaurant, and an example of the many Chinese language signs in the area around Glasgow University. How many Chinese students will return next year? Who knows …

I liked the two cycleway signs at Kelvingrove, and was intrigued by the mini basketball hoop and sign in North Kelvinside. Do the fairies play? 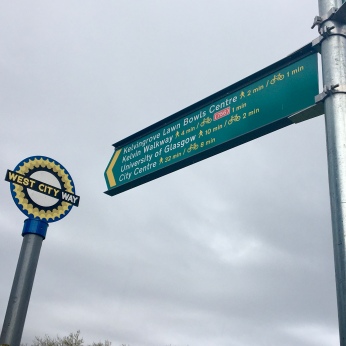 Two different kinds of paradise! Paradise is an alternative name for Celtic Park football ground, the huge sign of which can be seen from Glasgow Necropolis. “Almost any garden, if you see it at just the right moment, can be confused with paradise” (Henry Mitchell). We came across this welcoming sign to Woodlands Community Garden on our way home from our one evening out in the last four months. 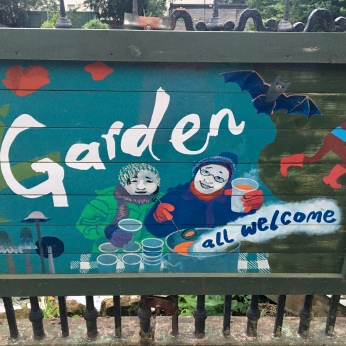 We loved this two-sided sign for Milton of Campsie Bowling Club.

And finally – I would have more belief that this was a centre of excellence if Terry could actually spell it!

I’m linking to Becky’s SquarePerspectives challenge and, as has become habitual in this series, I’ll play you out with a song. I’d decided on Sign of the times before looking for a video – and they’re all awful! So this is audio only, but you do get to gaze on a still of the very mean and moody looking Mr Bryan Ferry for two minutes or so. I’ll take that.