If you are a fan of a) suffragettes b) graveyards c) the writing of @peteralanross, then this is one for you. My @scotonsunday feature. @CathcartCem https://t.co/UOnPRoM5a2

A few months ago, my friend Beverly McFarlane told me that she was engaged on some research about a forgotten suffragette, but she couldn’t reveal who or why. She knew I’d be intrigued, and at the end of August my anticipation was rewarded when her secret turned out to be even better than I had expected. A combination of an organisation called Protests and Suffragettes and journalist Dani Garavelli had discovered the presence of Henria Williams in Cathcart Cemetery and, via the Women’s Library, Beverly had been asked to find out more about her life. It’s worth clicking on the link in the tweet above to read the full story – suffice it to say, Henria was one of the few suffragettes who died in pursuit of the cause and her funeral was almost like that of a soldier.

Naturally, I wanted to see the grave myself and the day the article came out we set off for Cathcart, on Glasgow’s Southside, to view it. Despite Henria’s heroic send-off, the Williams family tomb had since been forgotten and neglected and was badly overgrown with a tree obscuring its angel. 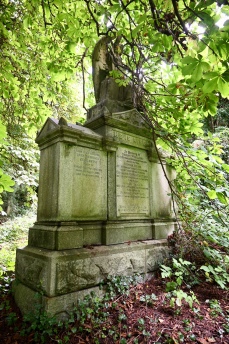 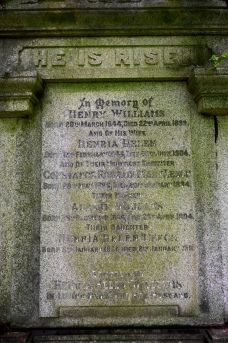 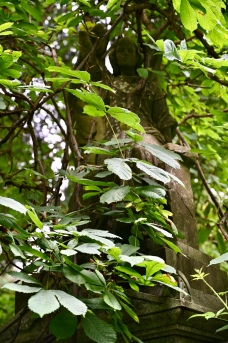 But joy! Dani and fellow journalist Peter Ross (author of A tomb with a view which is high on my to-be-read list) both report that the grave has now been cleared. I feel another visit is called for …

Wonderful to see, on an autumn evening stroll, the tombstone of the suffragette Henria Leech Williams, which until recently was obscured by tree branches. @CathcartCem @ScotSuffragette @womenslibrary @EastRenCouncil pic.twitter.com/vridhO37vK

When we had entered the cemetery we had thought it quite well kept, but the further in we got, the more overgrown it became. Henria was not the only one to be obscured. Here are a few more of the memorials which caught our eye in the main section of the cemetery. 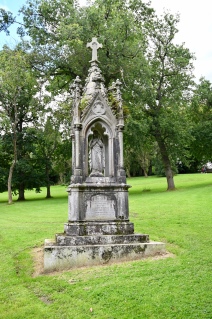 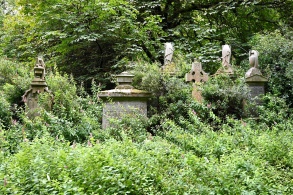 There is also a large Jewish section where I was in pursuit of further women’s history, because Dani’s article mentioned that artist Hannah Frank is buried here. Hannah features in two of Glasgow Women’s Library’s walks: the Gorbals, where she was born in 1908 to Russian emigrants fleeing persecution, and Garnethill where she graduated from Glasgow School of Art.

In her early career Hannah was renowned for her distinctive black and white pen drawings, and she later took up sculpture. The example of her work shown next to her grave below is part of a set of murals, designed by artist Liz Peden and unveiled in 2016, under the Cleland Street railway arches in the Gorbals. Hannah’s section includes the quote “My ambition, in Longfellow’s words was to leave footprints on the sands of time”.  She almost didn’t: in 2002, by which time her work was almost forgotten, Hannah moved into a nursing home. She asked her niece Fiona to disperse her drawings and sculptures around her family and friends, but fortunately  Fiona showed the work to art curators, and from there exhibitions around the country and abroad were organised. Hannah lived a very long life, dying shortly after her 100th birthday in 2008. 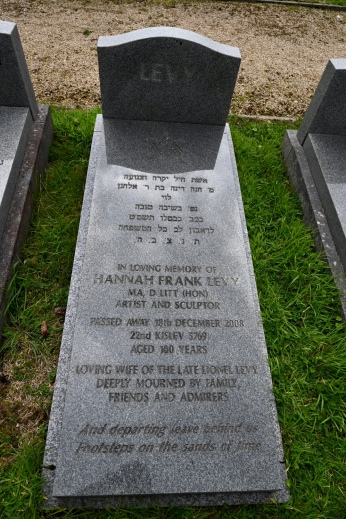 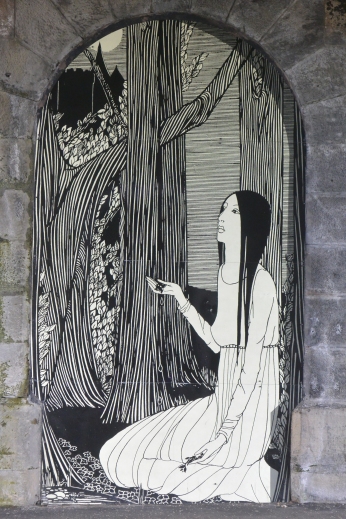 This was a really interesting afternoon in a cemetery I didn’t know at all, thanks to Dani and her curiosity about a lost suffragette. The next Graveyards of Glasgow post will be Calton Burial Ground.