Some years ago, I started a series called People make Glasgow (after the city’s current marketing slogan) with the idea of demonstrating how some of the city’s historical figures still influence Glasgow today. It didn’t get very far! However, as March is Women’s History Month and today is International Women’s Day, I thought I would revive it to tell you about one of my favourite Glasgow women, Isabella Elder.

Isabella has featured here before as one of only four named women in Glasgow to be commemorated by a statue. But who was she?

She was born Isabella Ure in 1828. In 1857 she married John Elder (1824–1869), a partner in a thriving shipyard. By the time he died, John Elder & Co. in Govan was regarded as one of the world’s leading shipbuilders. Isabella became the sole owner and ran it successfully for the next nine months until it was transferred to a partnership led by her brother.

As a wealthy, comparatively young, widow with no children, Isabella now had time on her hands which she filled by touring Europe for extended periods and becoming a major philanthropist in Glasgow with a particular interest in education, especially of women, and in the welfare of the people of Govan where her husband’s shipyard was located.

In Govan alone, Isabella was responsible for creating Elder Park (site of a statue to her husband and, later, her own statue), Elder Park Library, a School for Domestic Economy, a Cottage Hospital and the Cottage Nurses Training Home. The hospital is now a nursing home, known as Elder House.

Isabella was a generous donor both to the University of Glasgow and to the Glasgow and West of Scotland Technical College, now the University of Strathclyde. However what interests me most is that in 1883 she purchased North Park House, now known to many Glaswegians as “the old BBC building”. She provided this property and other financial support to Queen Margaret College, the first college in Scotland to offer higher education to women (although they were not yet allowed to graduate). In 1892, the College became part of the University of Glasgow, but Isabella only agreed to hand over North Park House on condition that the teaching provided to women was equal to that of men. The first women graduated in medicine in 1894 and in the arts in 1895.

Below you can see North Park House on the left, and on the right is 6 Claremont Terrace, next to Kelvingrove Park, where Isabella lived in widowhood. She died at home on 18 November 1905, and I don’t know if it was planned or if it was a coincidence, but the doctor who signed her death certificate was Marion Gilchrist, the first woman to graduate in medicine from Queen Margaret College.

Isabella is buried in the family tomb in Glasgow Necropolis. Generous to the last, her will left more than £125,000 for charitable purposes including the Ure Elder Fund for Indigent Widows of Govan and Glasgow.

The statue of Isabella was unveiled in Elder Park in 1906, at a cost of £2,000 raised by public subscription, much of it from the ordinary people of Govan who held her in high regard. She wears the academic robes of the University of Glasgow which had awarded her an honorary degree (LLD) in 1901.

The University has commemorated her in other ways. A memorial window in its Bute Hall, titled The Pursuit of Ideal Education, pictures her alongside Janet Galloway and Jessie Campbell of Queen Margaret College. (Image credit: University of Glasgow Archives & Special Collections, CC BY-SA 4.0, via Wikimedia Commons). 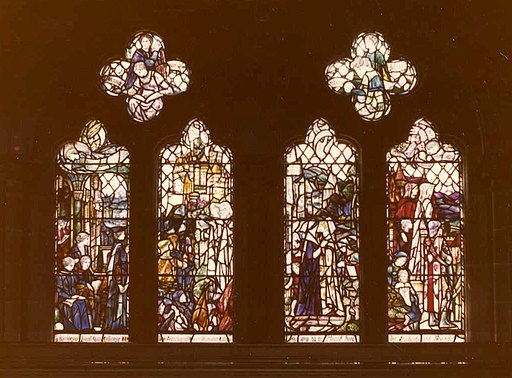 She is the only woman named on the Quincentennial Gates on University Avenue, where the name Elder, and the initials QM for Queen Margaret, can be found top right.

In 2015, the university renamed a building Isabella Elder. It is not a thing of beauty, but it remains, as far as I know, the only building on campus named after a woman.

Isabella is also commemorated in the arts, most significantly in the portrait by Sir John Everett Millais which is held in Kelvingrove Art Gallery and Museum. Although painted in 1886, she is still dressed in mourning for her husband who died in 1869. Like many wealthy widows, who didn’t need to marry again for economic reasons, she chose to continue wearing black long after the official mourning period was over. Also in the gallery below are a small exhibition in Govan in 2013, a window in Govan’s Window Wanderland last year, and me taking part in March of Women in 2015, an International Women’s Day event at Glasgow Women’s Library in which I represented Isabella.

I often refer to women’s history as hidden or forgotten, but in Isabella’s case it is well documented and she has truly left her mark on the city. I consider her achievements to be quite spectacular for the Victorian era when there were so many restraints on women and their activities, and wonder what she would have been had she lived a century later. A Professor? A CEO? A politician? I have no doubt that she could have accomplished anything she set her mind to.