On Sunday, we drove through South Carolina to get to Boone in North Carolina. The drive was quite dull, all freeway, and it rained just as we got here so it wasn’t a great day. However, the place we had chosen to stay, Lovill House Inn, is absolutely lovely (I know how to pick ’em), and being received with a glass of wine definitely helped cheer us up. The first night, all the rooms were taken and it was quite sociable, but the second night we had the place to ourselves. We’d been told Boone wasn’t a very pretty town, though the reason I selected it wasn’t for its looks but to act as a gateway to the mountain part of our holiday. Actually, we really liked it. True, the road in was the usual strip of fast food chains and motels but the “Old Downtown” area was much more attractive with a good range of restaurants (always the most important thing). We ate in Hob Nob Farm Cafe which was the second place I’ve been spoilt for choice (after the Jepson Cafe in Savannah). As a vegetarian I’m used to just having one or two options and I almost don’t know how to pick when I can eat almost everything on the menu.

We visited Grandfather Mountain (see above). Part way up, there is a wildlife preserve. I’m not in favour of animals in captivity, but these were creatures who had been injured or were otherwise incapable of surviving in the wild. The highlight was this beautiful bear, below. We have seen bears in the wild but (thankfully) not up this close, so it was a wonderful experience.

Below, you can also see me looking intrepid further up on one of the peaks. Of course, the cheat is you drive almost all the way and get to this rocky part over the Mile High Bridge. There are rugged trails up the peak you can see beyond the bridge, but it looks very steep and those bare, rocky parts are navigated by ropes and ladders, so I decided that definitely wasn’t for me. Instead, we found another trail, the Boone Fork Loop, a 5 mile walk alongside a creek (which we crossed and recrossed many times) which was very muddy. Just like home. 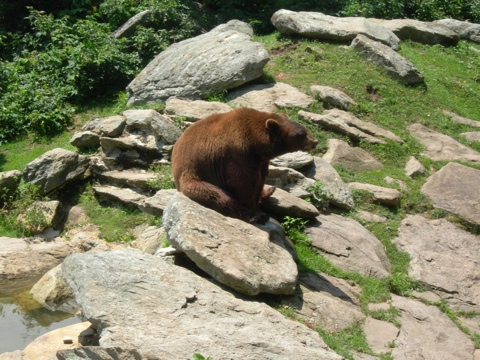