Italian Chapel and Tomb of the Eagles

The southeast corner of Mainland Orkney is connected to a string of smaller islands by four causeways: the Churchill Barriers. These were built in the Second World War to protect the huge natural harbour of Scapa Flow after a German U-Boat sunk HMS Royal Oak in October 1939. We crossed the Barriers to visit the Italian Chapel on Lamb Holm and the Tomb of the Eagles on South Ronaldsay.

Approaching the Italian Chapel head on, you would think it was a stone church. In fact, it was built by Italian prisoners of war out of two Nissen huts and assorted junk! Nothing is what it seems inside either – the brickwork and carvings are all painted plasterboard and the altar is moulded concrete, as is the statue outside of St George slaying the dragon. This is symbolic of the prisoners’ triumph over defeat and loneliness during their years of captivity – no wonder the chapel is also known as the Miracle of Camp 60. 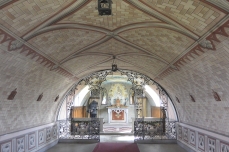 Tomb of the Eagles

Farmer Ronald Simison discovered this neolithic tomb on his land in 1958 – the name refers to the talons and carcasses of sea-eagles which were found alongside human remains. When we visited 19 years ago, Mr Simison was still very much around and the museum was located in the conservatory of the farmhouse: you could even handle the objects, including skulls. Now there is a purpose-built museum with guides to show you the artefacts, but it’s strictly no touching. The tomb itself is a mile along a beautiful cliff walk, passing on the way a Bronze Age burnt mound (prehistoric rubbish dump, basically) and a memorial stone to Ronald and his wife Morgan.

The entrance to the tomb is only 33″ / 85 cm high. Knee pads are available if you wish to crawl, or you can pull yourself in by trolley and rope. 19 years ago, I didn’t have a second thought. This time, I took one look at the entrance and claustrophobia took over. This will be the first of several posts featuring John emerging from a hole in the ground that I was too nervous to go down! 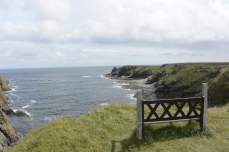 Tomb of the Eagles 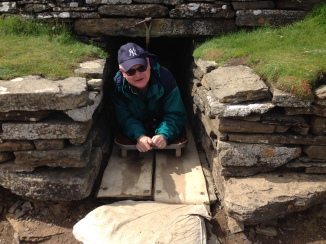 Brough of Deerness and Mull Head

When we returned to the Mainland, we stopped for a walk on its easternmost peninsula, Deerness. We started at the Gloup, a collapsed sea cave with the tide flowing in and out through a natural arch. Next, the Brough of Deerness – a grassy promontory accessed by a precipitous path and steps (when you see a chain fixed to the rock, you know it’s trouble) with the remains of a Norse or Pictish monastic site in the centre. I coped with that, but when we continued on along the cliffs of Mull Head I didn’t enjoy it at all. The path was very close to the edge and there was a strong wind – though I’m here telling you about it, so rest assured I didn’t get blown away.

Coming next: standing stones and visiting an archeological dig.