You might have guessed by now that we love visiting ruined castles, and there are plenty of them within easy reach of where we live. Craignethan Castle, in the care of Historic Scotland, is one of our favourites. The tower house was built around 1530 by Sir James Hamilton of Finnart, the eldest (but illegitimate) son of the 1st Earl of Arran and a friend of King James V. The castle’s defences include its location, high above the valley cut by the River Nethan, and a caponier, a stone vaulted artillery chamber which is rare in Britain.

Claims to fame include giving shelter to Mary, Queen of Scots, prior to her defeat at Langside on 13 May 1568, and, allegedly, being the inspiration for Tillietudlem Castle in Sir Walter Scott’s Old Mortality. Scott denied this, but interest in his novel attracted visitors to Craignethan and a railway station built nearby was named after the fictional castle. Houses built near the station developed into the modern village of Tillietudlem. Fact follows fiction! 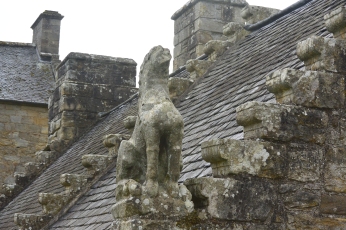 After visiting the castle, we explored part of the Lower Nethan Gorge Nature Reserve which runs from the castle down to the village of Crossford. 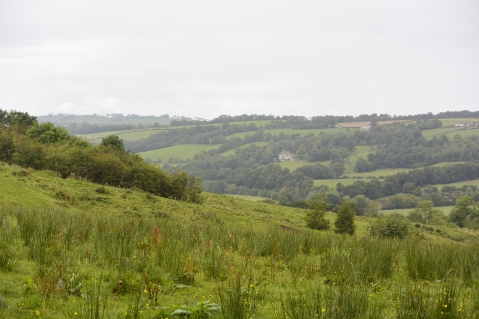 On the way home, we stopped at Blackhill Viewpoint, a rather damp trek across fields, but worth it.

I’ve just realised that in the picture of the trig point, you can just see a fuzzy rainbow forming. I said it was damp!