Drumlanrig Castle is the Dumfriesshire seat of the Duke of Buccleuch (bəˈklu). I don’t think he was home when we visited: he’s one of the largest landowners in Europe, so has plenty other houses to choose from.

The family is descended from the Duke of Monmouth, eldest son of Charles II. Unfortunately for Monmouth, he was – like all Charles’s children – illegitimate and could never be king, although he lost his head trying. However, this does mean, as our guide pointed out, that the Buccleuchs could be said to have more royal blood than the current royal family which descended from George I. He was approximately 53rd in line when he ascended to the throne, but the other 50+ candidates were Roman Catholics and therefore ineligible. To me, this all highlights the absurdity of the hereditary principle and if I hadn’t gone in a republican, I think I’d have come out as one!

Still, we paid our money (£10/£8) to tour the castle, gardens and grounds, and I admit to a little envy at the thought of waking up each morning and being able to look out on such beauty. Access to the house is by guided tour only, and no photography is allowed – this is the place where a Leonardo da Vinci painting, Madonna of the Yardwinder, was stolen by thieves posing as tourists in 2003 so they’re not taking any chances. Although the painting was eventually recovered, it didn’t return to Drumlanrig and is now on loan to the National Gallery of Scotland.

So let’s stick to the outdoors. When we arrived, a veteran car rally was setting up. 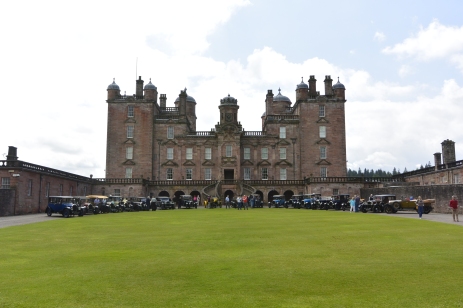 The stable yard gave access to the café and other visitor facilities, and to the gardens. The areas immediately surrounding the castle were laid out formally. 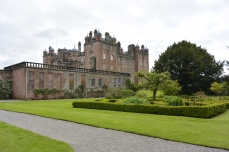 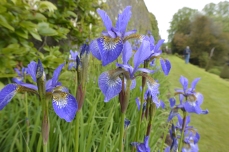 Irises in the Long Wall Border 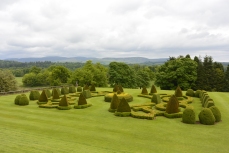 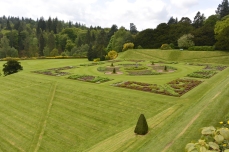 From there, we walked down through woodland gardens and the rock garden to the Victorian Summerhouse from which there was a great view back to the house.

Castle from the lawns

The Marr Burn runs along the edge of the garden and we followed it to the Goldsworthy Arch – designed by artist Andy Goldsworthy, it’s made of local sandstone and is said to represent a leaping salmon. 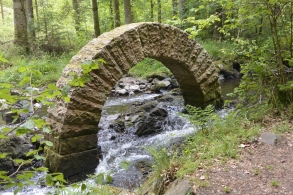 We then walked back to the castle via the bog garden and pet cemetery. 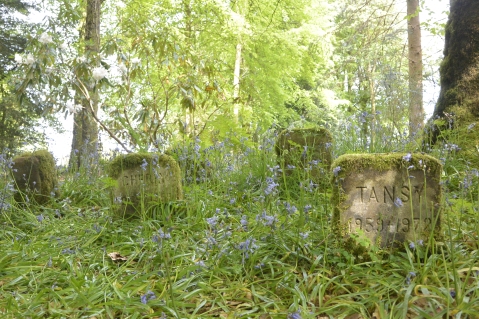 But we weren’t finished our walk – there are four trails through the estate and we chose the longest, the 5km Castle View. It’s a beautiful woodland walk which climbs to a viewpoint over the castle (see also the post header image) with the rolling Lowther Hills behind it. The descent takes you past the pretty Starn Loch. 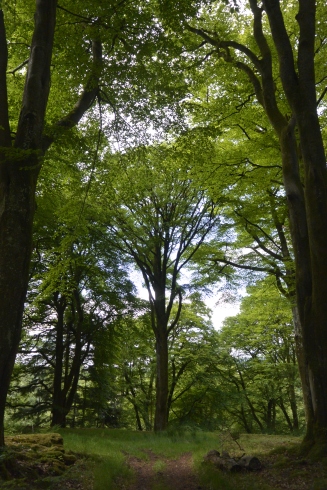 Back at the Castle, the last of the old cars were leaving. We also admired the Drumlanrig Sycamore – it’s over 300 years old and the largest in Britain. 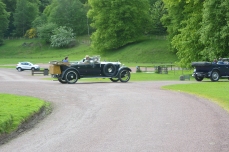 By now it was 5.30 and time to head home. I hope you’ve enjoyed your stroll round Drumlanrig which I’m linking to Jo’s Monday Walks.