Skip to content
Two years ago, we visited the sculpture park Jupiter Artland for the first time, and a revisit was beginning to feel overdue as we knew some of the exhibits had changed. When we were there in May, the park was celebrating its nomination as a finalist for Art Fund Museum of the Year – since then the prize has gone to the V&A in London, but there’s obviously no disgrace in losing to that sort of competition.

I’ll try not to reproduce too much of what I wrote in my original post in 2014, but if you missed that you might want to check it out too. One major change was at Bonnington House, the owners’ home, which had a new wing. The original house is Jacobean and the ballroom extension is seamless.

You approach the ballroom through a pretty garden with doocot (dovecot) and a view of Nathan Coley’s sculpture You imagine what you desire. 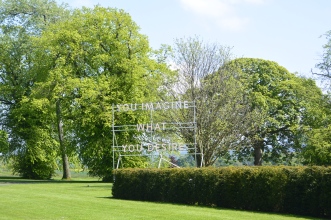 Inside, prepare to be stunned by the ceiling – a regular design with added motifs suggested by the children of the house. Here, a skull peeps through the foliage. The baskets are a temporary exhibition by Ditte Gantriis. 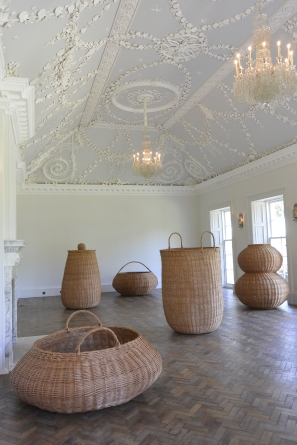 Ballroom with baskets by Ditte Gantriis

A path winds round Gala Hill and Forest. Here are some of the highlights.

I devoted substantial galleries to Laura Ford’s Weeping Girls and Ian Hamilton Finlay’s Xth Muse and Temple of Apollo in my first post about Jupiter Artland, so head over there if you want to see more. 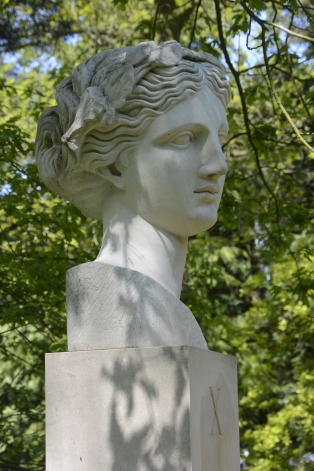 Yes, really! This temporary exhibition by Helen Chadwick consists of casts of the interior spaces left in the snow by warm urine. According to the guide, this typifies Chadwick’s work – “aesthetic beauty created out of an alliance of unconventional, often vile, materials”. What do you think? 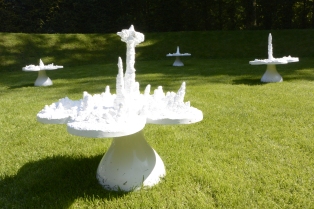 The lawn where the Piss Flowers are arranged is very close to the café area. I’m quite glad we had enjoyed our delicious falafel salads before visiting them. The café has indoor and outdoor seating areas – the caravan provides drinks and there is a kitchen behind it, so it’s not as rudimentary as it might look.

After lunch, we explored the other side of the park. Here are more highlights.

New in the orchard are these ladders – A Variety of Cultures by Alec Finlay. Placed near the young trees, they indicate the extent their pruned canopies will eventually fill. In the background, you can see Mark Quinn’s Love Bomb, of which more later. Crossing the wildflower meadow brings you to Ian Hamilton Finlay’s five Beehives, very topical at the moment, inscribed BEES; they lightly skim; and gently sip; the dimply river’s brim; BOATS. Nearby is Cornelia Parker’s Nocturne (a Moon Landing). Fireworks at the park’s opening in 2009 scattered fragments of moon rock. 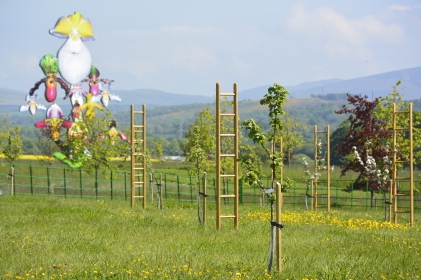 A variety of cultures by Alec Finlay

The boathouse on the duck pond contains bottles of water (not terribly photogenic) from one hundred British rivers which are listed on panels on the outside wall. I can see the Clyde and the Tyne, two significant rivers for me. Sara Barker’s installation Separation in the evening (a celestial blossom before the yellow house) is new since our last visit. 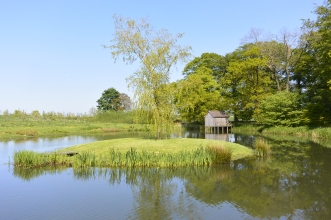 Separation in the evening by Sara Barker 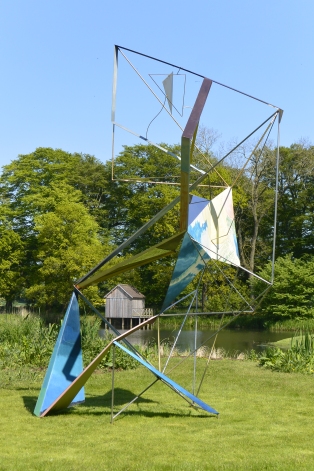 Separation in the evening by Sara Barker

We enjoyed Charles Jencks’ Life Mounds better last time because it was quieter and you could take the paths to the top to appreciate an overall view and the summit inscriptions (once again, see previous post). However, it’s obviously a great place for families to hang out and have fun – even if most were not adhering to the “no running, climbing or rolling on mounds” rule, and damaging tracks were beginning to appear. You can probably sense me rolling my eyes and tutting, and are muttering “killjoy” under your breath!

Arch at the Life Mounds

Arch at the Life Mounds 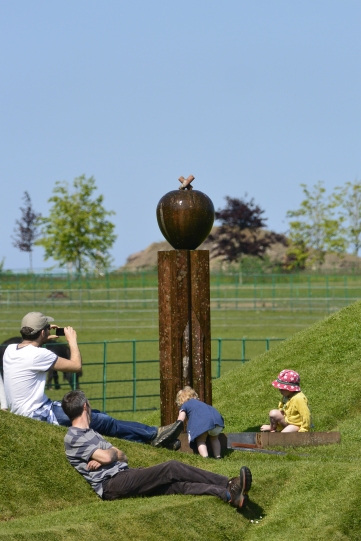 Sculpture at the Life Mounds

Marc Quinn’s Love Bomb, which sneaked into an earlier shot, is a 12-metre tall orchid (the design has been laser-printed onto vinyl and adheres to a stainless steel structure) described as “at once monstrous and seductively beautiful, demonstrating the ways in which human desires are now shaping the natural world”. I love its colours. 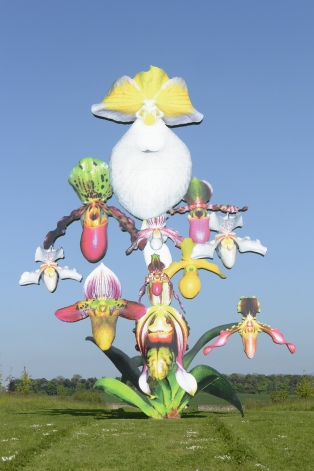 Finally, before we left we stopped at the animals’ field – cute donkeys, alpacas and sheep.

At £8.50 for adult entrance, Jupiter Artland is a great-value day out. This was meant to be a quick highlights post, but I’ve run on longer than I meant to – there are just so many interesting sculptures in the park, and there are more I haven’t shown you. Do you have a favourite?