(This is the final episode – find the rest by selecting the Tibet Category.)

We were happy to have made it back to Lhasa, but desperate to arrange the next stage of our journey. Incredibly, even though the advice the company had given us the evening before (to continue to Shigatse) had been so plainly wrong, W’s manager was still trying to insist that it was possible to get overland to the Nepalese border (in fact later that day the whole road was officially closed by the government.) However, they would get us flights if possible and W would meet us at 8 o’clock that evening to let us know the result.

After the manager had gone, W told us that the German party had priority and would get out before us – they were a bigger and more profitable group. However, he himself “knew somebody” at the airport and would try by his own methods to get us flights because he liked and trusted us. I have mentioned before how much we valued W, but it is true that this worked both ways. Several times, W had commented on what “nice” or “strong” people we were, by which I think he meant that we accepted adversity with good humour, no-one complained (well, we all did a little bit) and certainly no-one got angry or pointed the finger of blame at him. We knew he was doing his best for us under difficult circumstances, but a different set of people could have given him a really hard time.

At this point, we parted with our drivers. W gave us guidelines on what to tip them, and we did so at the lower end of the scale. Afterwards we felt a bit guilty because they had driven well through horrendous conditions, but overall we had got quite annoyed with them. The Landcruisers themselves were dodgy – apart from the axle incident, I’ve lost count of the number of times they had to be started by lifting the bonnet: not good in the back of beyond. Also, the two drivers did not seem to like each other very much and were very competitive, always wanting to be in front. Sometimes we didn’t know where the other vehicle was which was particularly worrying for us because W usually travelled with the other group leaving us vulnerable if something went wrong. We couldn’t decide whether our own driver was just trying to be friendly, or whether his interest in C was getting unhealthy – she sat in the front the first day, but after that we thought it safer to put John there. He didn’t mind – the front seat was much better sprung! Finally, we made the mistake of applauding our driver when he negotiated a couple of particularly difficult bits of road and this seemed to go to his head because his driving got very aggressive after that and we suffered the consequences.

That afternoon, we tried phoning various agencies we thought might help with tickets and got a gloomy response from all. It seemed the next two or three flights might be problematic, and John and I started planning what we could do for the next few days if stuck in Lhasa and we also considered if there were any alternative routes out, for example through Hong Kong. However, it all proved unnecessary. When we met W at 8pm, he said his manager was “more powerful” than he was and had secured us a 90% chance of tickets. It all depended on air temperature. Apparently, 20-30 seats were usually kept free, because with the air being so thin at that altitude, there might not be enough lift for a full plane to take off if it was over 10° C. If the temperature was right, we could have some of those seats. We told C not to feel too lucky; we could do without her sort of luck!

At 9.30pm, W summoned us again to say that his own negotiations had now borne fruit and we could definitely have the tickets if we gave his friend at the airport “a good present”. This amounted to $50 apiece – we paid, and kept our fingers crossed about the air temperature. The next morning, we got away. 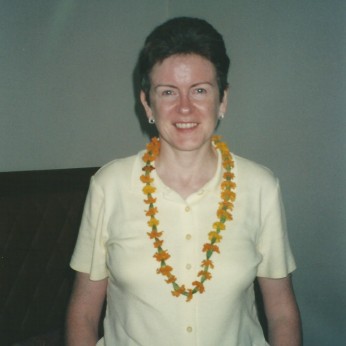 Arriving in Kathmandu felt like coming home. The people there, as before, were friendly, colourful and, above all, clean. The horrors of the previous three days faded away and didn’t seem so bad after all. This was Saturday – the Fs invited us to a lovely farewell dinner at their hotel, C left on the Sunday and we left on Monday feeling that we had had a good holiday after all.

So what did I learn? That as I expected, I am a tourist not a traveller, but when things go wrong I can still cope. I don’t panic, and I keep calm and cheerful. The value of comradeship was also brought home to me – the experience was so much better for being surrounded by sympathetic people. I also saw at first hand the dirt-poor lives that people in some countries live and know I have so much to be thankful for.

As I said at the beginning of the series, I wrote this account at the time of our trip – in fact, I started as soon as we got back to Kathmandu and continued to write during the flight home on any scrap of paper I could find. I originally ended with some political thoughts, but I want to steer clear of that here. We won’t be going back to Tibet, but I’ll certainly never forget it.

If this has whetted your interest in Tibet, you might like to look at Travelling Rockhopper’s blog. Each month, she chooses a country and posts one photo a day with a little information about it. In April she covered Tibet – here is the first post, so take it from there!