Skip to content
A few weeks ago, our Sunday afternoon plans fell through so we took a walk down to the Clyde instead. So many times I have walked in other riverside cities and marvelled at what they have made of their waterfronts. Glasgow always seemed to be lagging behind – in fact there were parts of the Clyde Walkway I just wouldn’t have felt safe walking along at one time. Thankfully, in recent years we have been catching up with the rest of the world and the Walkway is a very pleasant stroll. It also allows for a trip down Memory Lane as you shall see.

We started at the old (1870s) Hydraulic Pumping Station on Yorkhill Quay which used to power a swing bridge over the dock entrance. These Victorians really knew how to dress up their industrial buildings! It’s been used as a restaurant recently, hence the much newer conservatory. From here, you can look back to the Riverside Museum and the Tallship Glenlee.

Across the river, on the south side, is the Science Centre flanked by the BBC building, just visible on the left, and the Glasgow Tower which opened in 2001.

You should be able to take a lift up to the Tower’s viewing platform. However, it has been closed for about 80% of its life because of a succession of structural problems and the fact that it can’t operate if it’s too windy. To be honest, I’m not that keen to try it…..

Near here, two pedestrian bridges cross the Clyde. We took the Millenium Bridge across the river, pausing in the centre to look upstream to Bell’s Bridge (the blue one) and the Clyde Arc, better known in Glasgow as the Squinty Bridge.

This is where Memory Lane kicks in. Bell’s Bridge was built as the entrance to the Glasgow Garden Festival of 1988. I have wonderful memories of this – we had season tickets and visited often over the summer. Once the festival was finished, the site lay derelict for years until it slowly re-established itself as a media quarter. Here’s Bell’s Bridge in 1988 (with a bearded John) and a view of the site from the festival’s tower. Bell’s Bridge is visible at top left. 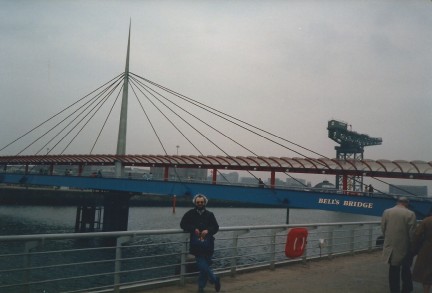 We only walked a little way along the south bank so that we could cross back over at Bell’s Bridge. We got a good view of the Clyde Auditorium (aka Armadillo) on the north bank and saw a poignant memorial to a firefighter. 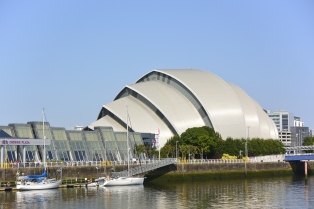 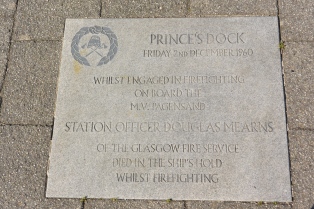 The BBC Scotland Building is fronted by a sculpture, Poised Array, by Toby Paterson and displays a fabulous reflection of the other side of the river in its glass walls.

In 1988, Bell’s Bridge would never have been quiet enough to get a shot like this! Once again, we stopped in the centre of the bridge, this time to watch jet-skiers tearing downriver.

Jetski on the Clyde

Back on the north side of the river we came to the Finnieston Crane – you’ve possibly spotted it already in both 1988 and 2016 pictures. It was erected in 1931 to load huge locomotives, a major export and Glasgow’s second most important engineering industry.

A little further on, we reached the North Rotunda. It and its southern companion mark the ends of the Harbour Tunnel built in the 1890s and long since fallen into disuse. The North Rotunda has been a restaurant for as long as I can remember, but the South Rotunda is boarded up. However, during the Garden Festival it served as Nardini’s Ice Cream Parlour. 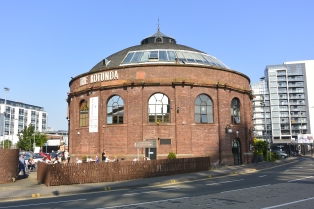 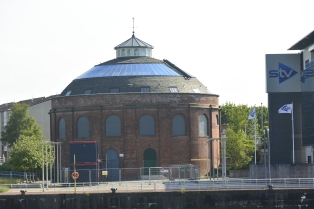 Across from the Rotunda is a Hilton Garden Inn with a riverside bar. It was a very hot day, so we couldn’t pass that could we? Behind me, you can see the South Rotunda and the STV building. It seems that drinking beer in the sun was a 1988 pastime too! 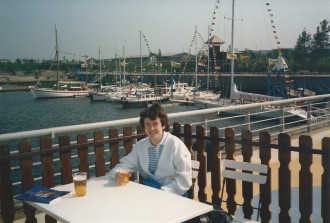 Just past the Hilton is the Squinty Bridge. We didn’t cross it, but I’ve included this shot so that you can see why it got it’s nickname. I’ve never heard anyone actually calling it the Clyde Arc.

The next bridge down, we most certainly couldn’t cross. The Kingston Bridge carries the M8 over the river. We could stand under it though and admire the mural by Smug (Sam Bates). It’s one of several around the city celebrating the Commonwealth Games of 2014 which were held in Glasgow. There’s also a memorial to another fire disaster. 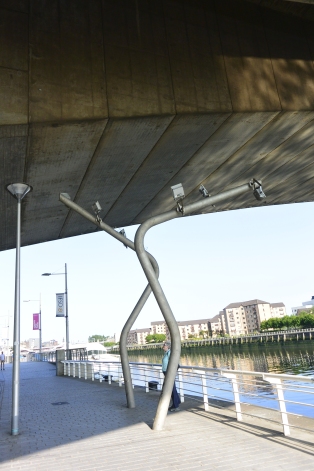 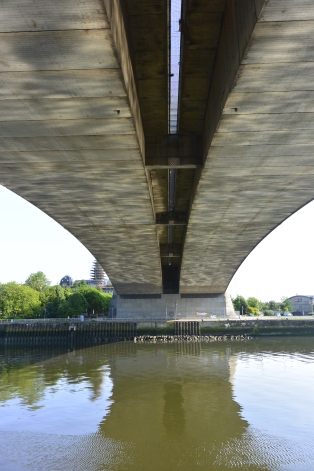 From the Kingston Bridge we decided to head for home. First we had to negotiate the bridges and walkways across the M8 and the Clydeside Expressway, both very busy roads. 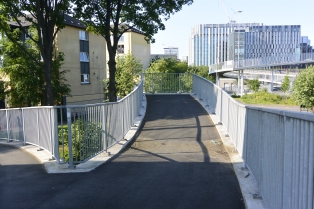 On the other side, we came across this lovely old building, a former savings bank. 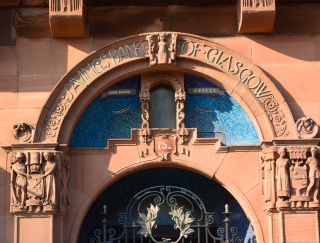 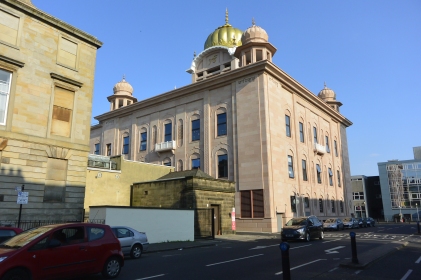 ….before heading home through the greenery of Kelvingrove Park.

I hope you’ve enjoyed this Clydeside stroll. The best bit for me has been looking out my 1988 photographs, though my memory failed me in one thing. I thought we had so many – but there are only 55. For the whole summer! We take more than that in a day now: how times have changed. I also went looking for our Glasgow Garden Festival whisky miniature but, unaccountably, that seems to have gone. I did find our Festival Friends lapel pins and this photograph of me hillwalking the following year in my Festival T-shirt (another non-survivor) so I’ll leave you with that while I go off and nurse my serious hair envy. Can you have that for your younger self? Linked to Jo’s Monday Walks.