Not long after leaving Red Lodge, we spotted a ghost mine on a hillside. The Smith Mine is the site of the worst underground coal mine disaster in Montana where 74 men were lost in February 1943. Some died as a result of a violent explosion, but most fell victim to the methane released by the blast. It’s a very poignant site. The information board quotes a note left by Walter and Johnny as they waited for the gas to catch up with them: “Good-bye wives and daughters. We died an easy death. Love from us both. Be good.” The mine finally closed in 1953 and has been left as a memorial. 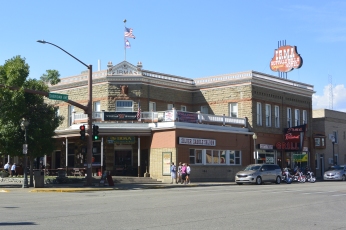 Our next stop was back over the border in Wyoming: Cody, founded in 1895 by William F “Buffalo Bill” Cody. I must admit to being rather disappointed – it didn’t look that different to many of the other western towns we passed through, just more touristy. We admired the Irma Hotel (opened and named after Bill’s daughter in 1902), had a quick coffee and left. 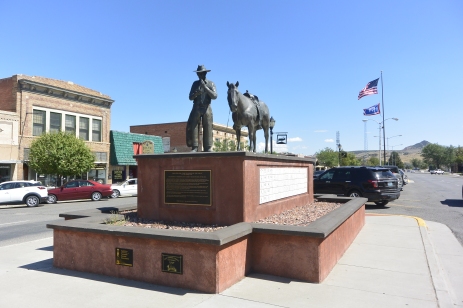 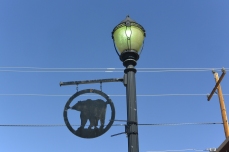 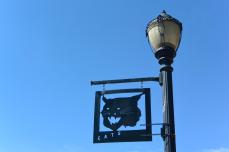 After coffee, we pressed on to Thermopolis. The statue is From this soil come the riches of the world by Carl Jensen (1999) and depicts a cowboy sifting dirt through his hands in 1897 when Thermopolis was founded. The Black Bear Café provided a good lunch, then it was back on the road again.

Our last stop of the day was Hell’s Half Acre, a sort of mini Bryce Canyon which, despite the name, covered about 320 acres. It was fenced off, so you couldn’t get down amongst the hoodoos, but there was a good view from above. 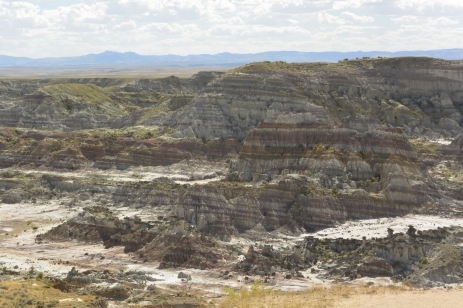 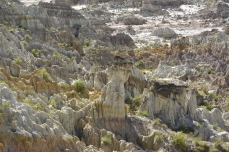 This was close to Casper, our overnight stop. It looked an interesting place to stay with lots of pioneer history to explore. I wish I could tell you about it – but we’d been on the road for two weeks and still had another week to go. Reader, rather than sight-see I’m afraid we took advantage of a hotel with a laundry to wash out our smalls.

The next day was all about reaching Rocky Mountain National Park. We only made one stop, in Laramie, the very first destination on our road trip which I’ve already written about (here) way back in October. Estes Park is the main town on the edge of Rocky Mountain and we agreed with our Lonely Planet Guide that “there’s no small irony in the fact that the proximity to one of the most pristine outdoor escapes in the USA has made Estes Park the kind of place you’ll need to escape from”. As we crawled through it bumper-to-bumper our hearts sank. Fortunately, however, my planning had been good. Our hotel, the excellent Alpine Trail Ridge Inn, was on the far side of town near the park entrance and had its own restaurant next door.  When we left in two days time we could take a different road which meant we would never need to go back into Estes Park. Not only that, we had something of a room with a view (see above). Result!

Next time: we climb Deer Mountain.