Lews Castle was built by Sir James Matheson, a Far East trader who bought the whole island of Lewis in 1844. In 1917 the island was bought by Lord Leverhulme, the soap industrialist, who set about trying to replace the culture of crofting (small-scale farming) with a fishing empire. The crofters weren’t impressed and his plans came to naught – the island was put up for sale again in 1923, and the community was at least able to buy Stornoway and the castle. Since then, the castle has had many uses – from 2016 it has housed a museum on the ground floor and holiday accommodation above.

The forecast was for rain later, but the morning was sunny so we set off for a walk around the grounds – the wooded peninsula showing behind Stornoway Harbour in the first image below – before hitting the museum. 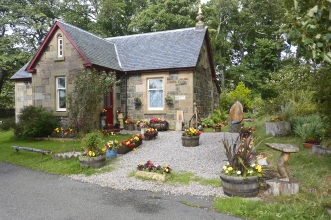 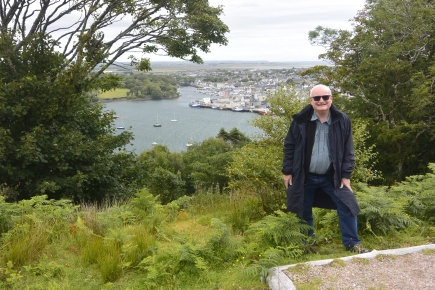 By the time we arrived back at the castle it was raining – and definitely time for lunch. We’d had morning coffee in the small café in the grounds, but it was now packed so we headed back towards town to Kopi Java which was recommended in our guidebook. Run by a local couple (she comes from Lewis, he comes from Indonesia) it provides excellent food and illustrates how much Stornoway has changed since our last visit 29 years before. Then, we remember queuing at a counter for “coffee” which was poured from a large metal tea-pot with the enquiry “Sugar?” Had we not said no quickly, sugar would have been poured in for us. Gourmet it was not!

Back in the castle, we were extremely impressed with the museum. Centre stage were six Lewis Chessmen, part of a 12th century set which was found nearby but now belongs to the British Museum which has kindly (?) loaned some of the pieces back. In the morning, we’d passed some large wooden models in the grounds and had a bit of fun with them. Spot the difference!

The castle also has an excellent café, and after more fortification we looked at the public areas on the rest of the ground floor. I don’t know what the apartments above are like, but I suspect they will be very grand. Next visit maybe … 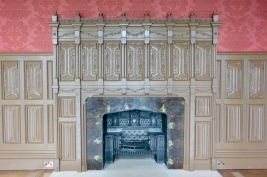 This was our last day in Stornoway – the following morning, we set of for Harris, an island that we didn’t need a ferry to access, or even a causeway. How could this be?